Though the owner Lyf Gildersleeve and executive chef Trever Gilbert originally intended the cart to serve as a laidback (and heated!) beer garden waiting room for their East Burnside restaurant, it’s well on its way to becoming a destination all its own.

“We wanted to create a venue for local chefs to showcase farms and fresh ingredients of the Pacific Northwest,” Gilbert said. “We truly want to make it a platform for anybody whose talent we can recognize, to showcase what Portland really is doing. A lot of it gets lost.”

For example, Doug Adams, who stepped away last year from the Holler Hospitality empire he helped build to focus on smaller projects, is sharpening his knives for a February 19 appearance, while oyster expert Maylin Chavez (former chef/owner of Olympia Oyster Bar) will shuck her specialty on March 5.

While Chef Shack comes out swingin’, Gilbert wants to also hold space for up-and-coming chefs who may not have the resources to secure their own pop-up spot. As the guests tag in, Gilbert plans to assist as sous chef.

Gilbert also plans to handle all the food between guest chef appearances, but keep things changing—drawn from whatever inspiration strikes him at the farmers market. As a former sous chef at Departure, who has worked in other Asian-inspired kitchens, Gilbert imparts a lot of flavor to a smorgasbord of fresh Pacific Northwest seafood. He says his Colombian heritage and lifelong love of Mexican food lends a Latin influence to his cooking, which tends to skew gluten-free and vegan (seafood dishes aside).

Chef Trever Gilbert plating some ceviche. Janey Wong
Chef Shack's inaugural menu of small plates included a coal-roasted butternut squash soup, grilled oysters, escolar ceviche, grilled carrots, and arroz con coco. The dishes were all stand-alone stunners but also worked wonderfully with each other, with a common thread of coconut and some mild-medium heat tying them all together.

Visitors can expect dishes served straight from the grill. On our visit, Gilbert used a Big Green Egg outdoor cooker—prized for its versatility—as the cart’s primary cooking source. The oysters cooked long enough to impart a light, smoky flavor—that still retained the delicate texture of a raw oyster—before they were adorned with cantaloupe, Cara Cara orange, and cilantro.

Under a pile of fresh Thai herbs, the silky, golden butternut soup was piping hot and warmed up a brisk February afternoon. Similar to the comforting soup, the arroz con coco (sticky rice, coconut, raisins, chili, chocolate) that closed out the meal was nourishing, and reminiscent of the Filipinx dish champorado. Although it was served as a dessert, I would gladly eat it for breakfast any day. On the chilled side, Gilbert’s version of ceviche utilized buttery escolar served with a papadum—a twist I can’t say I’ve seen before with a ceviche, but it provided an excellent crunchy vehicle for the rest of the dish.

But the chef’s ethos, “good ingredients, not good recipes,” is perhaps best exemplified by the grilled carrots, whose humble flavor was highlighted by yellow curry, chili, mint, and cashews. As I sat eating, a couple of departing diners swung by Gilbert’s station to tell him the carrots were the “best thing we’ve put in our mouths, possibly in the last couple of years.”

Other passersby stopped to inquire: “What’s going on here?” as Gilbert worked. He patiently and enthusiastically gave the long story short of the cart's mission to each and every one.

Gilbert says he enjoys the customer interaction, noting: “Sometimes I feel like chefs tend to forget about why we cook—it’s inherently to feed people and make them happy. Sometimes when we’re tucked back in the kitchen, there’s a disconnect there. A chef who can see who they’re cooking for and have that appreciation…the food is going to be better.”

So whether you visit on a weekend where Gilbert is at the helm or to see the flex of an exciting talent, you’re guaranteed a delicious and exciting experience. For Super Bowl/Valentine’s weekend, Chef Shack will open an extra day, from Friday through Monday. You can catch live music at the shack every Saturday from 4:30-7 pm. 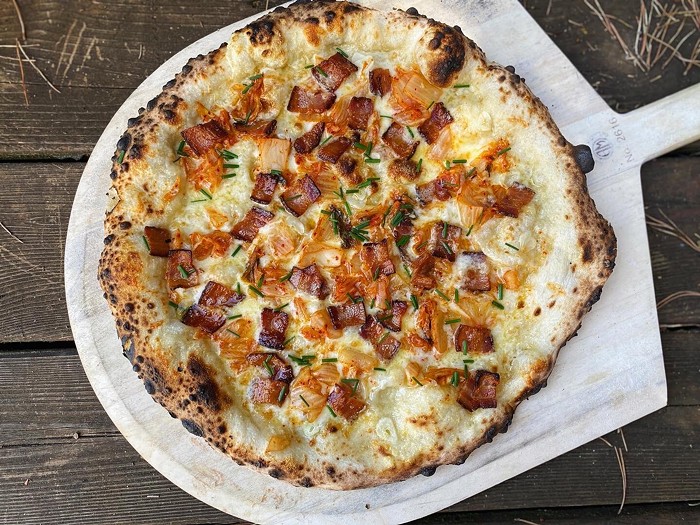 Where to Get Food for Mardi Gras 2022 in Portland