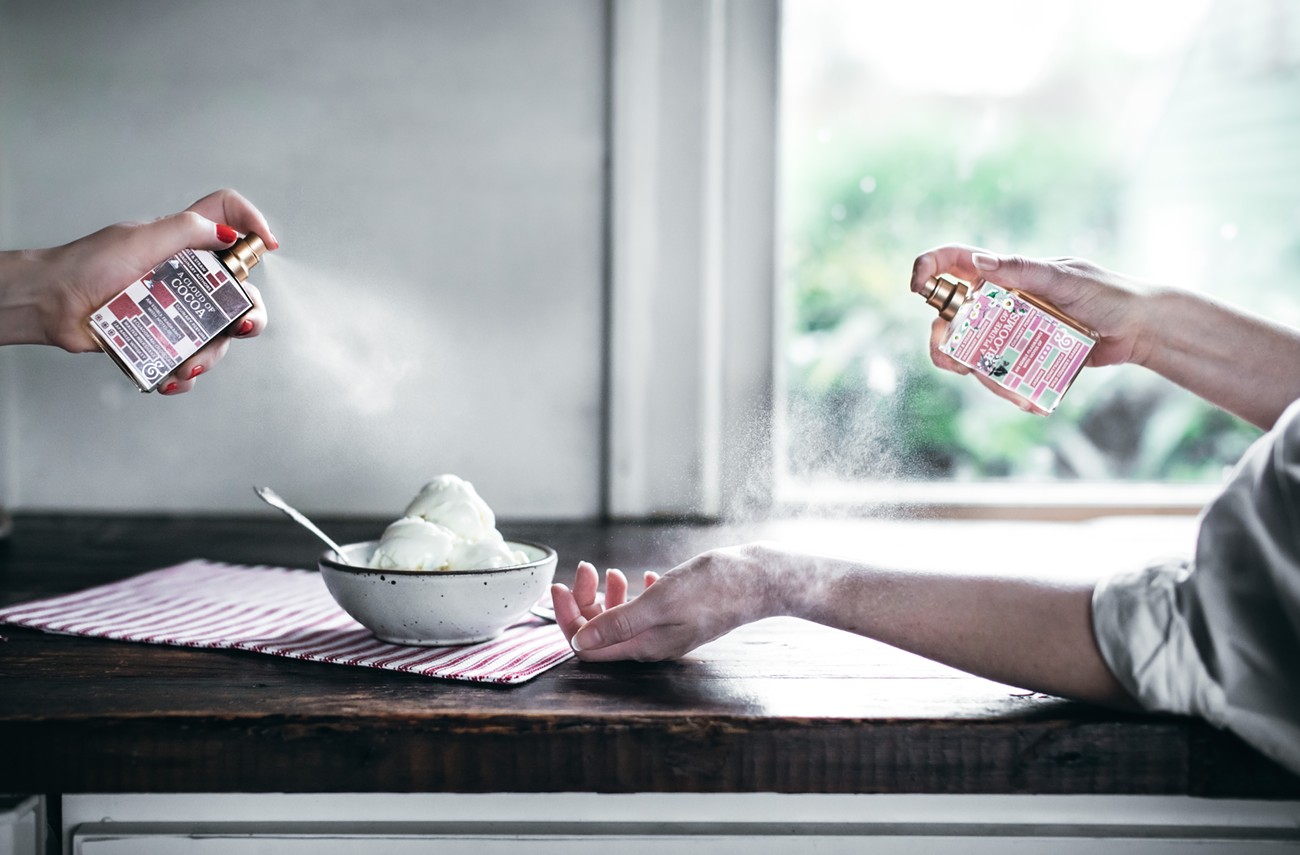 Spraying any of the fragrances directly onto your tongue will taste like Everclear. Instead you should waft it in as mist or spray it onto food. Salt and Straw

Depending on your fine dining haunts, you’ve probably been on the receiving end of a restaurant pepper mill and an offer to grind. Now the craze of culinary perfume spritzes is also slowly, but surely making its way across—or lingering in a fine mist above—our plates.

Aromatic dining adjustments are not unwelcome. In many ways, they fit right in. The scent of food is an important part of taste, and the food world—especially the craft cocktail world—has always played with fragrance: an orange peel rubbed along a glass’ rim, the practiced absinthe pour.

It makes sense that Salt & Straw—long the butt of twee ice cream shop jokes, but never ceasing its inventive stride—would expand into the realm of whiffs and wafts.

Teaming up with “scent as art” Portland perfumers, Imaginary Authors, Salt & Straw released a triad of “culinary perfume” toppings for National Ice Cream Day, in July. First available for fifty cents per spray in parlors, Salt & Straw now sells the gourmet oils in 50 ml bottles individually, or as flights with 10 ml samples of all three.

The easiest of the three to wrap your nose around might be a Swoon of Citrus, which Imaginary Authors founder Josh Meyer compared to the tart edge on LaCroix and Spindrift cans. While lychee freshens up the classic lemon-lime duo, a Swoon of Citrus also possesses flavored shisha tobacco qualities. Your opinion on nights at the hookah lounge will decide whether this swoon is for you.

To us, a Cloud of Cocoa wears and tastes like a compliment to nostalgic makeup, such as Lip Smackers or the “Mac (mac) L'Oréal” lip glosses Lil’ Mama wore back in the day. It smells and tastes entry level, but like it’s on the road to discovering the finer things.

A Plume of Blooms doesn’t break ground as a beauty product, but as a food topping, it belongs in Jo Malone’s diet. Of the three, Meyer called this one his favorite, comparing the sophisticated yellow-white bouquet of petals—including jasmine, honeysuckle, and ylang-ylang—to shaving truffles on pasta, then recommended buyers try a spritz on a mozzarella tomato salad. “It would be so elegant,” he told the Mercury. “It uses this incredible jasmine absolute. I don’t think there’s anything like it even in the perfume market.”

The scents are not either man’s first culinary perfume foray. In 2018, Salt & Straw co-founder Tyler Malek approached Meyer about the idea. After trial, error, and at least one shelving of the project completely, Imaginary Authors released a Whiff of Waffle Cone in 2020, as both a fragrance and a candle. Whiff of Waffle Cone carries accents of heavy cream, salted caramel, Saigon cinnamon, amyris, and orgeat—less of a lactic dessert and more of a savory spiced pastry.

Malek and Meyer both admit that their first edible prototypes were disgusting, but Meyer thinks he nailed his formulas after dialing down the scent concentration to an eau du toilette level. He mixed dozens of prototypes for Malek and both spoke highly of an edible rose mix that narrowly missed the current trio's final cut. So, if the culinary perfume idea catches on beyond foodies and fragrance fiends, new flavors could still be in the pipeline.

It also seems important to note that, while it appears these may currently be the only foodie fragrances available for retail, neither Salt & Straw nor Imaginary Authors can take credit for inventing the concept.

LA perfume house Régime des Fleurs bottled two edible perfumes: Timelapse in 2015 and Citri in 2020. A “food experience” party planning company in the UK, called Lick Me, I'm Delicious, has concocted edible fragrances for guests since at least 2016. But both companies now only offer these confections in high end or private party settings. So unless you get invited to an exclusive soiree, Salt & Straw is the closest place to take home edible scents.

Despite that, Salt & Straw’s filed a trademark on the phrase “culinary perfume” in May. Malek says the move represents the training his employees offer on culinary perfume and its use.

“There’s something about [culinary perfume] that’s so universal in the food industry,” Malek said. “For some reason, I can’t help but dream that ten years from now, everyone will have a vial of perfume on the stovetop with their olive oil and finishing salts. So we wanted to own that movement, and show the world we’re going out on a limb to try something new.” 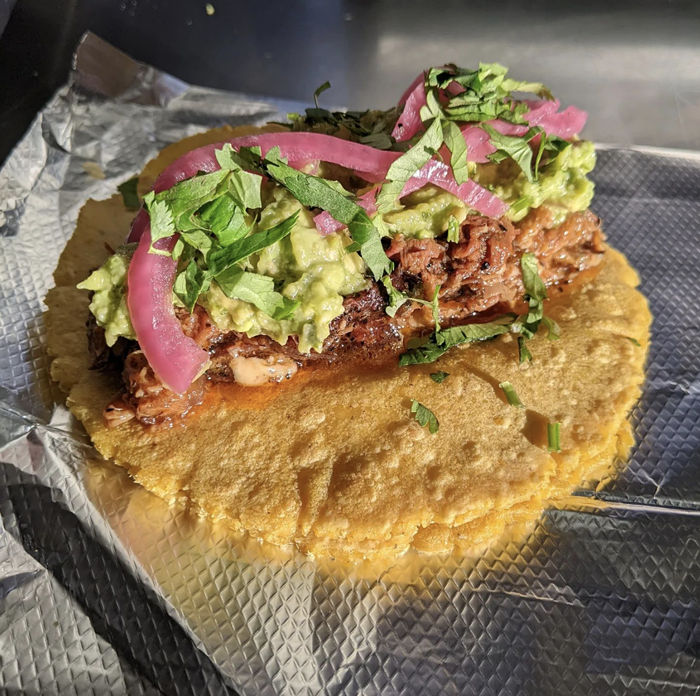 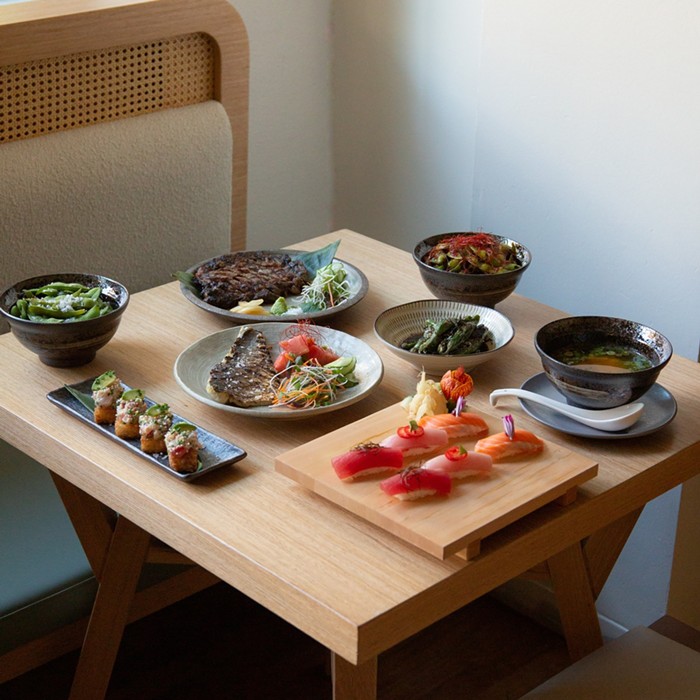