William Steuernagel explained that his bar is as much about the vibe as it is the short, unique menu. 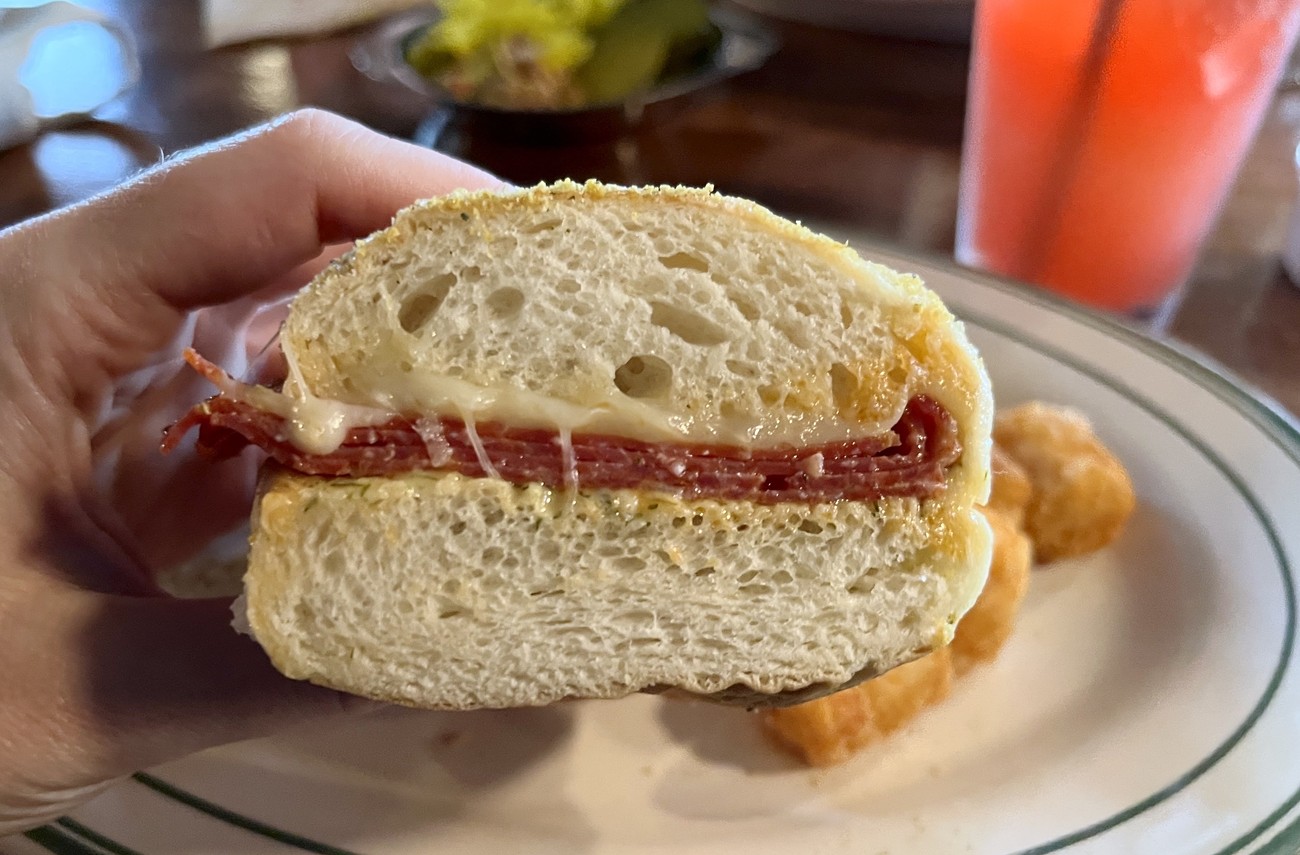 We expected Mister Goose to be a sandwich shop, so when we walked into a homey, wood-paneled pub—with a stern portrait of a goose in a tiny cowboy hat over the mantle—it caught us a little off guard.

"Sit anywhere," said a man sitting at the bar, who just seemed to be eating lunch.

Between the cozy-looking booths, video lottery, and close-captioned corner TV, it felt like we'd stepped into a 20-year-old tavern. Our server gave off a similar aura—the strong, nonjudgemental character of an experienced barkeep.

When we later related this to Mister Goose owner William Steuernagel, over the phone, he called out, "She's singing your praises, Linda!" Steuernagel took our questions while also making sandwiches for lunch rush.

Steuernagel co-owns the popular SE Portland charcuterie shop Cheese & Crack with a business partner, Nathan Hall, but Mister Goose is Steuernagel's own endeavor, though he credits his boyfriend, Isaiah Pottle, with a lot of the work. Pottle even painted the aforementioned charming goose portrait.

Like some of our favorite restaurants, Mister Goose is heavily influenced by Steuernagel's own tastes and preferences. The sandwiches on the menu are a hybrid of his and his grandmother's recipe. "She's 87, so she can't exactly remember how she used to do them," Steuernagel said. "I know exactly what model of steamer she had, I know what kind of buns she used, but she used Miracle Whip. And I make my own."

Mister Goose leans housemade in just about all the menu's offerings, from the simple but tasty tomato soup to the muffuletta-style olive salad that comes with your complimentary pickle plate.

The cut-away sandwich shot that accompanies this review isn't much to look at: a middle section of pepperoni and melted Havarti surrounded by fluffy steamed bread. Unseen beneath the bun, clarified butter and a house seasoning of herbs, salt, and nutritional yeast pack a delicious pop. The sandwich is good, certainly comforting. When you dip the pepperoni version into a side of tomato soup, it approaches disassembled pizza in taste.

However, while Steuernagel is proud of his menu's centerpiece, he's just as excited to discuss the restaurant's vibe, which—while it looks like a 20-year-old bar—was a burrito spot as recently as two years ago.

"We just wanted to make a place that's comfortable, that's easy, not pretentious. Food that's approachable, prices that are reasonable as well," he explained.

At Mister Goose, a "small set" of a full sandwich and a side (tomato soup, tater tots, macaroni salad, or cucumber salad) costs a mere $10. The "large set," with two sides and a soda, is $16. Steuernagel says keeping the menu simple was actually an intentional approach to keep prices low and avoid food waste.

The beer on tap is Miller High Life, but there's a full bar—though in keeping with the vibe you should take your Lemon Drop orders elsewhere. Mister Goose doesn't have (or aspire to have) the necessary ingredients for complicated cocktails, but a neat whiskey, sandwich, and soup sounds pretty nice.

"I feel like the economy of this place runs counter with how far it is from my house," my companion noted, dipping his sandwich into his soup. If it were just a skootch closer to St. Johns, or even Sauvie Island, he said he would eat Mister Goose at least once a week. "I think I could bring a first date here and know a lot about them, based on their reaction."

Located 30 minutes north of Portland, along US Highway 30, Mister Goose is likely a place Portlanders will stop at en route to Astoria or St. Helens' month-long Halloweentown festivities. But Steuernagel says he also serves a lot of kayakers—due to the shop's proximity to Next Adventure Scappoose Bay.

"It is lovely. There's so many little channels to paddle down," he says. "There's so much wildlife out there. We're about four minutes from where you drop your kayak in the river."