Surely you're familiar with those Disney on Ice spectacles that portray princesses and other Disney creations performing in a heavily produced show at large scale coliseums. (Parents feel contractually obligated to take their kids to at least one of these things, usually while gritting their teeth and suffering in quiet desperation.) Well a surprising byproduct of the Disney/Marvel merger is that now, the company's superheroes get their own shot at a flashy coliseum production—and while Marvel Universe Live! (now playing at the Moda Center through Sun March 6) may not be "on ice," they have something far superior: Superheroes on DIRTBIKES.

Whoever the genius was that came up with this idea, I'd like to shake their hand, because Marvel Universe Live! is a fun, crazy, in-your-face spectacular that happily eschews a reasonable plot for a show for kids and adults who love Marvel's characters, explosions, fire, stunts, martial arts, acrobatics, special effects, and... did I mention DIRTBIKES?

MORE REVIEW AFTER THE JUMP>>>

The primary storyline may be a confusing mishmash of various subplots in the Marvel universe, including the Avenger movies... but I'll take a stab at it: Thor's butthole brother Loki has a new plot up his sleeve to attain the Cosmic Cube, which he'll use to enslave the universe. Unfortunately for him, Thor has scattered the cube's pieces around the globe so that no one person can harness its awesome power. Loki responds by gathering the most evil supervillains in the world (including Red Skull, Green Goblin, Whiplash, and many, many more) to grab up these missing fractals, inspiring our heroes The Avengers, Spider-Man, a few of the X-Men, The Falcon, Captain Marvel, Nick Fury, and probably a dozen more I'm forgetting) to stop the villains, while cracking jokes and making atrocious puns.

What I primarily loved about this show was the simultaneous reverence and irreverence for the characters. One moment the show is slavishly devoted to over-explaining minutia about the Marvel Universe, the next, Bruce Banner (the Hulk's alter-ego) is doing sick front wheel stands on a dirtbike. Now, I never knew this... but Bruce Banner is wicked awesome on a dirtbike, as is Wolverine, and when the two are racing their bikes around the stage, popping wheelies, and jumping ramps, it's like we're being exposed to a glorious (and hilarious) new world.

Yes, there are things a cynic would quibble about; the first half of the show is a bit exposition heavy, and during the larger battle scenes, the action can be confusing and lack focus. BUT DEAR GOD—when you have roughly 30 people performing meticulously crafted martial arts choreography and jaw-dropping stunts, as dirtbikes race around the stage amid explosions and lasers? That my friend is a SPECTACLE. A joyous, crazy spectacle that good humored Marvel fans won't want to miss. (So if you feel embarrassed to go by yourself, rent a kid to bring along with you!) 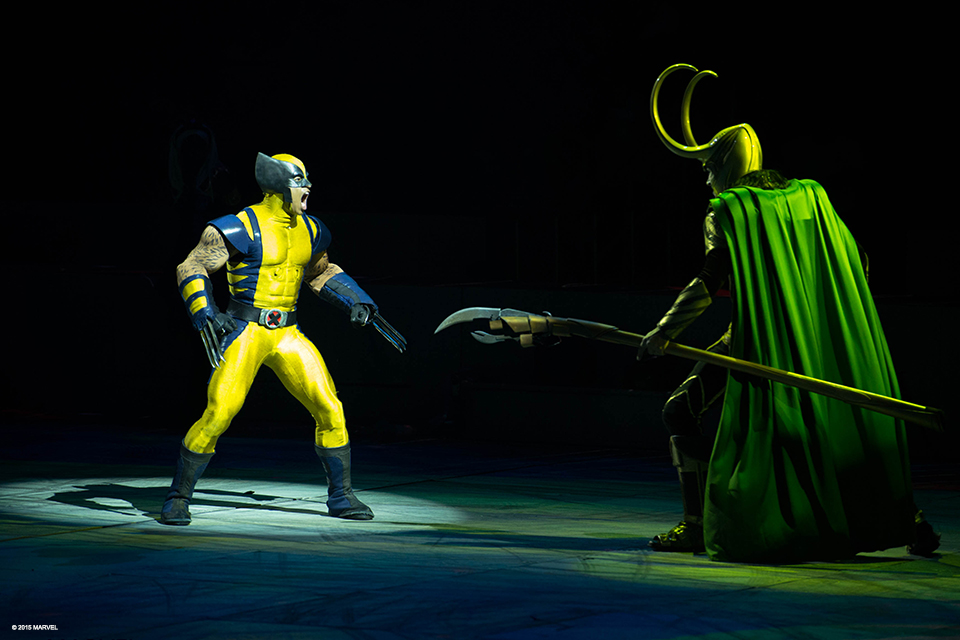 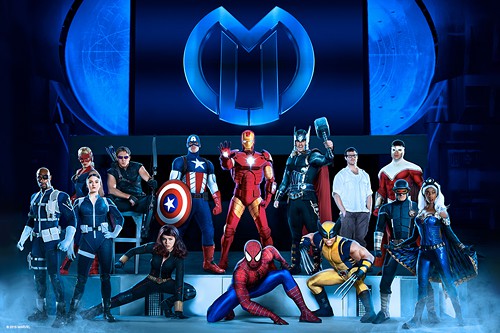