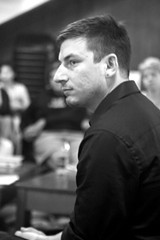 After thousands of phone calls and emails protesting the dismissal of Beaverton student teacher Seth Stambaugh, the Beaverton School District superintendent has finally invited Stambaugh to meet with him about the incident.

Stambaugh's lawyer, Lake Perriguey, is hopeful that the meeting is a sign the school district will offer Stambaugh his place back in the 4th/5th grade Sexton Mountain classroom he was barred from teaching in after he mentioned gay marriage to a student back in September.

The school district superintendent, Jerry Colonna, told reporter (and Mercury alum) Angela Webber at the Beaverton Valley Times that he had invited Stambaugh to talk over the incident, as well as Stambaugh's career and "how I might be able to help him."

"There is hope that the focus will be on the best interests of the children and on the families affected by a hasty decision," says Perriguey, "and that the intervening 30 days has allowed for significant reflection about how such decisions reverberate into the community and into the minds of the young people."

Also new: The Q Center on Missisippi has announced it will host a community forum next week about LGBT youth in schools. In response to the recent rash of teen suicides, "We Are Here" is inviting people young and old to share their experiences in local schools and ideas for changing bigoted, bullying situations. Details here.

Tags: Homo Blogs
If you enjoy articles like this, please help the Mercury continue our mission of providing up-to-the-minute information, progressive journalism, and fun things to do in Portland by making a small recurring monthly contribution. Never forget: Your help is essential and very much appreciated!
CONTRIBUTE NOW