Do Spoilers Really Matter? The Relative Importance of Storytelling in Film 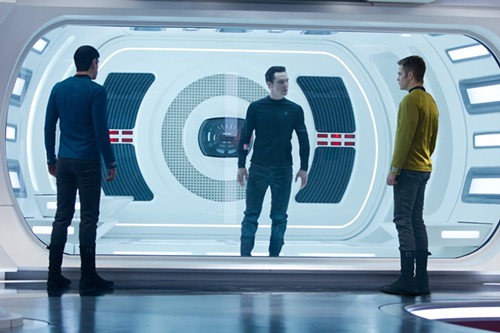 People are still talking about Star Trek Into Darkness which is both good and bad news for Paramount. Good because it's still rattling around in people's brains after they see it, instead of sliding off their frontal lobe like a fried egg from a teflon-coated pan. Bad because some are still talking because the writer and director let their gross, oogy sides spill onto the screen just a little bit.

A lot of the discussion is happening in hushed film-geek huddles, because of the spoilers, secrets, and twists. Darkness hinges on two different "gotcha" moments; one that wasn't even mentioned at all in the marketing, and one that was the main focal point, like a tablecloth tossed over an elephant, with J.J. Abrams stopping short of wearing a candy-striped jacket and straw hat, shouting through a road-cone, "Hey, pay your $12.50 to take a guess at what this elephant-shaped thing might be!"

I did not have to play that game, because I'd had the "mystery" spoiled for me. And I wasn't all that mad about it - but the people who knew I'd been spoiled were. A similar gasping sadness occurred during a conversation about the movie Seven, a film I love, but a film I consider responsible (along with The Usual Suspects) for kicking off an era of film in which scripts lived or died by whether it contained The Twist.

(Eventually, the king of that era, M. Night Shyamalan, ineptly murdered The Twist as the most viable form of cinematic storytelling, but not before a large number of moviegoers were trained to watch movies as a competition first and foremost, a contest to see if you could outsmart the movie or vice versa. One of the more poisonous side-effects of this short-lived era was the rise of spoilerphobia as we currently know it.)

Anyway, we started talking about the phenomena of The Twist, and this guy brought up Shyamalan's The Sixth Sense after I brought up Usual Suspects. We compared how all these films were constructed, how meticulous the storytelling was - you know, all the stuff people talk about after a life of substituting legitimate emotional growth and experience for renting tapes at Videoland. I mentioned that I knew The Twist before seeing Sixth Sense. Dude seemed genuinely upset for me, gave me a sad look, and was like "Man, I'm sorry."

I was confused. It's not like knowing ruined the movie for me. There's a study from 2011 suggesting I wasn't even all that weird to feel that way. (Warning - that link has a huge spoiler for Harry Potter in it). In fact, my appreciation of the film and his were, so far as I could tell, roughly the same; I might have actually liked it a little bit better. The only difference was that I knew about the twist heading in.

So how big is that difference, for you?

Obviously, for me, it's not a huge gulf, because I still really enjoyed and appreciated the movie. But for him, he seemed unable to understand how I could still like it if I knew what was going to happen before it happened.

I guess for me, it's because a movie is way more than it's plot. Here's the best way I can put it:

I'm not saying any of those aspects are unimportant. They're all very much important. Would I have liked Usual Suspects less if I'd known about its twist? It's possible. But I loved the movie on the second watch, not the first. So I'm not sure if being spoiled would have REALLY hurt the movie for me, because being spoiled wouldn't have changed how well made it was, how well acted it was, how fine tuned the pacing was. All those things can be appreciated even if you know exactly where the plot is going.

Here's another example: I've never read the Song of Ice and Fire books by George R.R. Martin. My only knowledge of that universe is coming via Game of Thrones. And about 3 weeks ago, through no fault of my own, I learned what a Red Wedding is. I think I'm supposed to be disappointed and angered by this revelation, but I'm not, really. In fact, it might be increasing my anticipation. But telling friends who read the books that this detail was spoiled resulted in a reaction more appropriate to hearing someone had run over the family pug.

These are some of the movies that I've had spoiled for me before I saw them, not counting literary adaptations of books I'd already read:

I love pretty much every single movie on that list, and have since my first viewing of them.

That's not to say there aren't times I've had a movie spoiled and gone "C'mon, man!" Especially when it comes to movies (say, Memento) whose entire structure is to be a puzzle box: When the plotting is 100% the main focus of the story, having that aspect spoiled will probably diminish that first viewing. And don't mistake me for advocating that people toss spoilers in a conversation like a bunch of '50s-era juvenile delinquents chucking piss-filled water balloons at your anticipation levels.

But if I'm being honest, I can't think of a single time where knowing what was going to happen in the movie has actually affected my enjoyment of the movie. For me, the sanctity of the first viewing is a phenomenon that kind of slides off me. It's important - but it's not that important. Not in the face of all the other aspects of storytelling beside just the plot. In fact, I'm starting to wonder if people's (over) reactions to potentially being "spoiled" are even really examined, or if it's just accepted as axiomatic. I guess when it gets down to it, I don't value the initial thrill of the surprise as much as I do the more lasting satisfaction of well-tuned machinations that make the surprise possible. Surprise is a bonus for me, it's never the primary concern in the storytelling.

But that's me. What about you? You've been spoiled; everyone has. Did it cause you to dislike a movie you would have otherwise liked? What order do you put your Why, How, and What? When did that order fall into place for you, and why did you come to consume your stories the way you do?

Bobby Roberts is one of the Portland Mercury's calendar editors, as well as one of its film and pop-culture critics. His past career choices included joining corporate broadcast radio just in time for its death, and leaving the world of independent podcasting just before it blew up, but luckily for him there is nothing more stable in the 21st century than a career in alternative print media.
If you enjoy articles like this, please help the Mercury continue our mission of providing up-to-the-minute information, progressive journalism, and fun things to do in Portland by making a small recurring monthly contribution. Never forget: Your help is essential and very much appreciated!
CONTRIBUTE NOW