Amy Dotson brought the CUT team onstage to share name announcement moment. Andrea Lonas Photography / Courtesy of the Portland Art Museum
The Portland Art Museum (PAM)'s Northwest Film Center begins a new chapter this week, as it takes on a new name and progresses towards the realization of a vision several years in the making. Newly dubbed the PAM's Center for an Untold Tomorrow (CUT), the PAM CUT signals the institution's movement towards new mediums, partnerships outside Portland, and *gestures vaguely.*

Not to knock it, but it's unknown. And that's the whole point.

"I think anyone who's coming in right now and saying 'This is what's going to be happening in the future, and this is how it should look' is kind of full of it," Amy Dotson, the center's director and PAM's curator of film and new media, told the Mercury.

It's not like the future is entirely unknown, Dotson knows what the center is doing now. She listed the many things that PAM CUT will continue to curate in its new form, among them: screenings at the museum's Whitsell Auditorium, youth camps, outdoor shows. Additionally, the center will expand on projects like the 2023 revision of the Portland International Film Festival (not happening in 2022) and the center's Sustainability Labs—its holistic, career-building program for artists.

But let's get one thing cleared up: The name change won't mess with March's Tilda-Whirl—matinee screenings, programmed around the career of Tilda Swinton. You see, when Northwest Film Center planned that series they were already in a PAM CUT state of mind.

That burgeoning state of mind is responsible for a camp this summer aimed at podcast-curious youths and classes like the upcoming Saturday series in April called The Gooey '80s, which will explore "practical effects in the '80s and all the political undertones that go along with that," Dotson said.

"You don’t have to be a hardcore cinephile to come and participate. We really are taking a look at everything. Our mission is to change for whom, by whom, and how cinematic stories are told."

Taking its name from the classic trope of a filmmaker yelling “Cut!” at the end of a take, the rebrand—by local design firm, Skylight Collective—could be interpreted as the end of a scene. It's also the time to swivel the cameras around for another shot.

A prerecorded Jeff Goldblum spoke about his own versatility, saying "I play a little jazz piano." Suzette Smith
"Storytellers and media artists of tomorrow will no longer be content to be contained," Dotson said at the 2022 Cinema Unbound Awards, on Tuesday March 8, which also doubled as an announcement party for PAM CUT's new name.

Many of the awards show's presenters were A-list actors like Will Smith, Jeff Goldblum, and Isabella Rossellini. Most didn't come to Portland to present in person, but the museum prerecorded remarks that were (from Goldblum) charming and (from Rossellini) actually quite illustrative of the name change and vision, in a concrete way.

Rossellini presented an Astonishing Artist award to Shirin Neshat, an Iranian-born artist, filmmaker, and director of the 2021 feature Land of Dreams.

"When she sent me the script [it was] itself a piece of art," Rossellini said. "The script was completely unusual. I couldn't read it. It was pieces of dialogue. It was photography. It was beautiful sentences written in Farsi, beautiful calligraphy. I contemplated it like you contemplate a piece of art."

Neshat's script is a great example of what PAM CUT is looking towards, because it sounds completely outside something workable in the contemporary film world—yet she made a feature from it, and it was good enough to premiere at the Venice Film Festival.

The fact that Neshat received an award, at all, is a clue in itself. It's always been a little confusing: What are the Cinema Unbound Awards rewarding? Local talent? People who made projects here?

With Neshat, there's no Portland connection—other than our city has an arts institution specifically interested in awarding a very specific art approach. Cinema Unbound seeks to support artists playing successfully in multiple modalities, and its awards show specifically honors excellence in multiple modalities. Neshat is perfect person to receive such an award and so were the other honorees: Carrie Brownstein, Reinaldo Marcus Green, Arthur Lewis, Phil Lord, Chris Miller, and Roger Ross Williams. Each of them boasts multiple credits and focuses—film to fashion, writing to rock and roll. 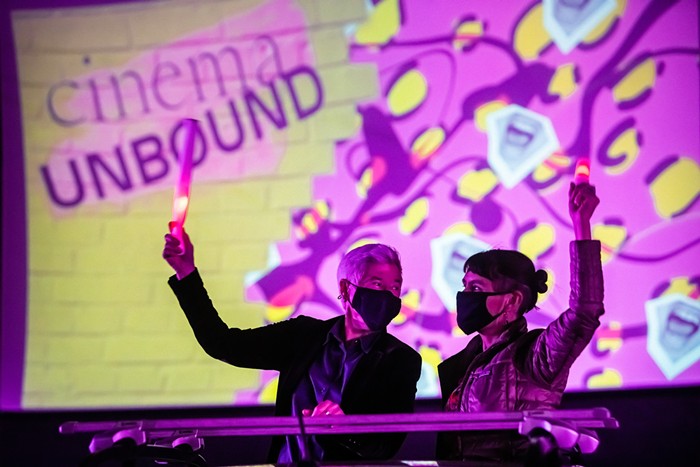 Courtesy of the Portland Art Museum
On the other side of finally figuring out the Cinema Unbound Awards, PAM CUT is starting to sound exciting. It's now easy to see the ways Tuesday's awards show was programed to employ PAM CUT's vision.

The removal of place and location (Northwest) from the center's title, represents something Dotson and her team have been working towards since even before the 2020 unveiling of the center's Cinema Unbound branding.

'We love working here in the Northwest, but we also want to make sure stories come in and out," Dotson said.

Cinema Unbound was the blueprint and PAM CUT is the rocketship hanger where Dotson and her team will build projects and partnerships to travel, beyond the Pacific Northwest, to national and international art conversations. Right now, half the Cinema Unbound presenters and nominees appear via prerecorded quip award presentation. Eventually the show may draw entirely in-person appearances, virtual reality appearances, or PAM CUT may find some way to view Jeff Goldblum that is completely new.