Archival footage shows racism was at the core of how law enforcement responds to riots today. 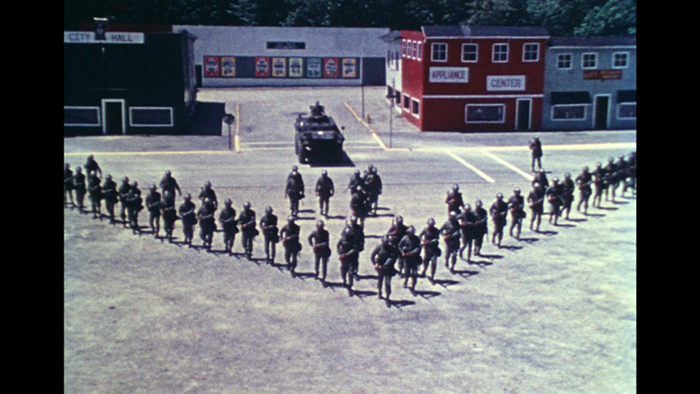 These fuckers. courtesy of SIFF

Sierra Pettengill's Riotsville, U.S.A. is a surreal examination of the militarization of the United States police force as a response to the class and social consciousness gained by Black and other marginalized communities in the late 1960s.

The documentary situates itself in a fake town called Riotsville, which was constructed by the federal government on US military bases and populated with soldiers pretending to be civilians. Or, rather, "rioters." For a keen audience of military members and local police representatives, these "actors" mimicked real moments of uprisings—like the 1965 Watts Rebellion—with the intent to demonstrate to authorities how to mercilessly quell protests "infiltrated" by radical Black "agitators."

Across two different camps—one was built at Fort Belvoir in Virginia and another at Fort Gordon in Georgia—hundreds of soldiers charged at, gas bombed, and physically assaulted fake rioters in front of an applauding crowd. We know all of this because the government and media filmed these exercises and distributed the tapes as training material to police precincts across the country.

Riotsville, U.S.A. is solely composed of archival footage: clips come from the Riotsville tapes, the barely covered protests around the 1968 Republican National Convention in Miami Beach, and talk show film from the progressive but short-lived evening talk show PBL. Threading it all together is powerful narration—written by critic Tobi Haslett and spoken by Charlene Modeste—which ruminates on the images onscreen.

"These are dream riots," Modeste says over footage of soldiers-as-rioters going ham in Riotsville. "The young men acting out the fantasy of conquest and invasion. What are they thinking of? Home? Vietnam?"

Pettengill also takes a step back from Riotsville itself to look at coinciding political issues. Specifically, the Kerner Commission, a group founded by President Lyndon B. Johnson, in 1967, to explore and prevent the root causes of civil disorder by these so-called Black agitators. The commission came back with findings that were shocking for a group composed solely of white moderates.

Their data proved what Black and brown activists had been saying—racism from white people and unequal treatment by the government were to blame for the uprisings. Some of their recommendations to address the issue included taxing the rich, building more affordable housing and ending redlining, creating more jobs, and stopping segregation. The only suggestion the government listened to? More funding for police.

In reconstructing the moment where the American government chose tear gas over housing, violence over understanding, fake plywood towns over living people, Riotsville, U.S.A. opens a portal to a universe where the opposite could have been true. The membrane between these two disparate timelines is perhaps thinner than we realized. Watching this documentary from the vantage point of a post-2020 uprisings America, it's even easier to see that the conditions we live under aren't foreordained but rather maintained by racism, classism, violence, and structural indifference. It's up to us to see that cycle and break it.

Riotsville, U.S.A. is currently playing at the Regal Fox Tower.