The Mercury once described Nyback as "the P.T. Barnum of Cinema." 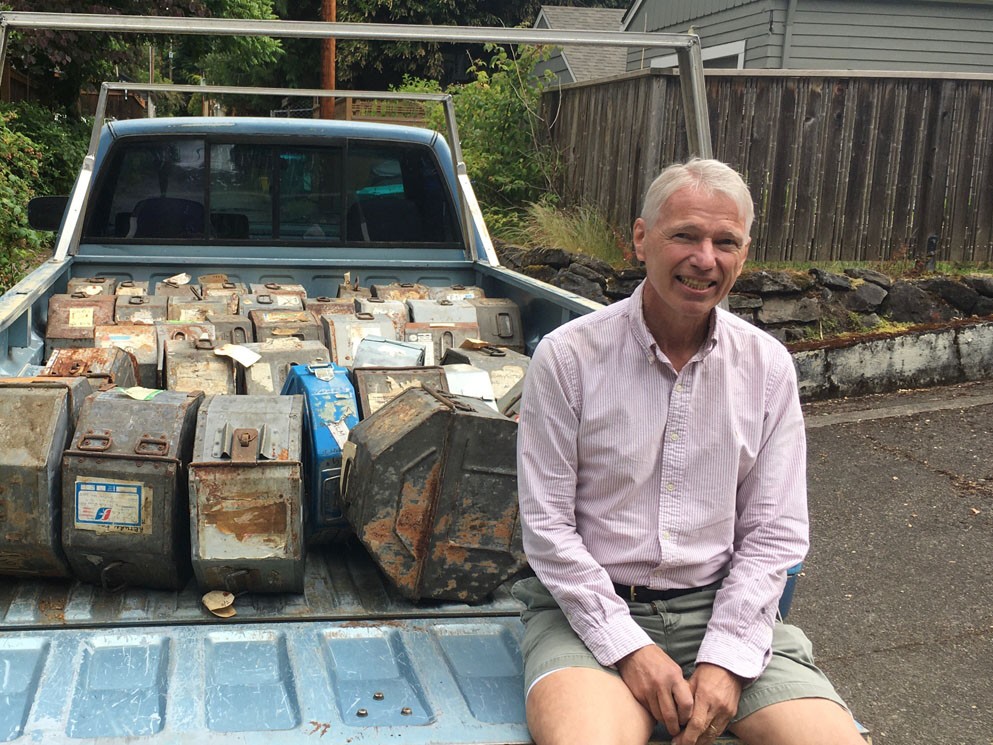 Dennis Nyback sits in the back of a truck, with approximately 30 film canisters. Gary Lacher

Last week, the curtain closed on the life of Dennis Nyback, the former owner of the Clinton Street Theater and one of the most fervent advocates of preserving and elevating the history of global cinema—in all its high and low glories. He quietly succumbed to cancer in his home near Mount Tabor on October 2. He was 69.

Nyback leaves a lot behind with his death. Not just the memories that his fellow cinephiles have of his obsessively curated programs of vintage animation, features, and Scopitones, the proto-music video format from the ’60s that were once played on a kind of visual jukebox. But Nyback also left behind a vast collection of analog film that he spent the better part of his adult life acquiring—an archive that his longtime friend and housemate S.W. Conser has only begun to reckon with.

“Right now, we don’t even know where one of his storage units are,” Conser says. “But it’s full of old projectors—carbon arc projectors—that need a home. We’re hoping to rescue as much stuff from the scrap dealer as possible.”

Conser came to know Nyback through the latter’s inventive and legally-questionable programs of vintage Warner Brothers and Disney cartoons that featured troublingly racist caricatures and blatant sexism. At the time, Conser was working on a college paper about Bugs Bunny as “a contemporary trickster figure,” he says.

“It was called ‘Somebody’s Invading My Dream,’” Conser continues, “based on the tune ‘Someone’s Rocking my Dreamboat,’ which Bugs sings in a couple of different animated shorts. I saw Dennis was doing one of his shows, which might have been Bad Bugs Bunny: The Dark Side of Warner Brothers.’ At the end of the screening, I asked if he knew who wrote [the song], and, well, of course he did. That was Dennis. He was a walking search engine of all information having to do with classic cartoons, old music, machinery, and baseball.”

Nyback’s interest in the entertainment and esoterica of the first half of the 20th century was cemented in his younger days. His passion for early jazz, blues, and Tin Pan Alley songcraft led him to practices like jitterbugging and train hopping. While living in Seattle, he became obsessed with film after taking over the Rosebud Movie Palace, a tiny theater that specialized in screening films from the ’30s and ’40s. Nyback began padding out the programs with newsreels and his collected cartoons.

The movie house trucked along until 1981 when plummeting ticket sales forced it to close. Nyback continued to work as a projectionist around Seattle and snapped up prints of films and cartoons when he found them. Eight years later, he was brought into help run a monthly film series at the Jewel Box Theater in the Belltown neighborhood. He was soon packing the seats with programs like “The Effect of Dada and Surrealism on Hollywood Movies of the Thirties,” which included footage from Busby Berkeley musicals and W.C. Fields shorts, and “Black Film Views,” a regular series screening Blaxploitation features.

His run at the Jewel Box lasted three years, and he was soon running the Pike Street Cinema. Also at that time, word of Nyback’s collection of prints and film knowledge began to spread around the world and he soon began accepting invitations to screen programs like “Bad Bugs Bunny” and “Stag Party Special” at theaters in Europe and throughout the US, including regularly at the Clinton Street.

After a stint in New York City where he opened the Lighthouse Cinema, Nyback relocated to Portland in 1999 to take over the Clinton Street Theater, where he helped upgrade everything from the plumbing to the screen. He and co-manager Steve Tenhonen were even able to score some theater seats from a Regal Cinemas location that was shutting down. It was during his tenure at the Clinton Street that Nyback truly cemented his name within Portland’s film community through his inventive programming, his continued support of the weekly screenings of Rocky Horror Picture Show, and his appreciation for idiosyncratic visions.

In a statement announcing Nyback’s death, Aaron Colter, a member of the collective that recently took over ownership of the theater, said, “There’s simply no way the Clinton Street Theater would be the home for independent and odd cinema without his time at the helm. He remains an inspiration for what the venue can be with enough dedication and a unique imagination.”

For the next 20 years, Nyback continued to travel with his films, took on positions teaching film courses at Marylhurst University and Portland State University, and, in 2007, founded the Oregon Cartoon Institute to help celebrate the state’s rich history of animation on both screen and in print media.

Through it all, Nyback’s fortunes waxed and waned. At one point, he was even living out of his truck before Conser invited him to share his home. But, says Conser, no matter what fate befell him—broken projectors, missed opportunities, and minor hiccups—Nyback faced it all with a bemused shrug.

“My lingering memory of Dennis is just, whatever the hell went wrong, and, you know, things would go wrong all the time,” Conser says, “things would go caddywhompus, he would just brush it off and say, ‘Oh well,’ and move forward with the next adventure.”

A memorial for Nyback is planned for November 15 at the Clinton Street Theater. Keep an eye on their website for details.