Brilliant Portland-made animation, masterful narrative reworking, but could have gone harder on the fascism. 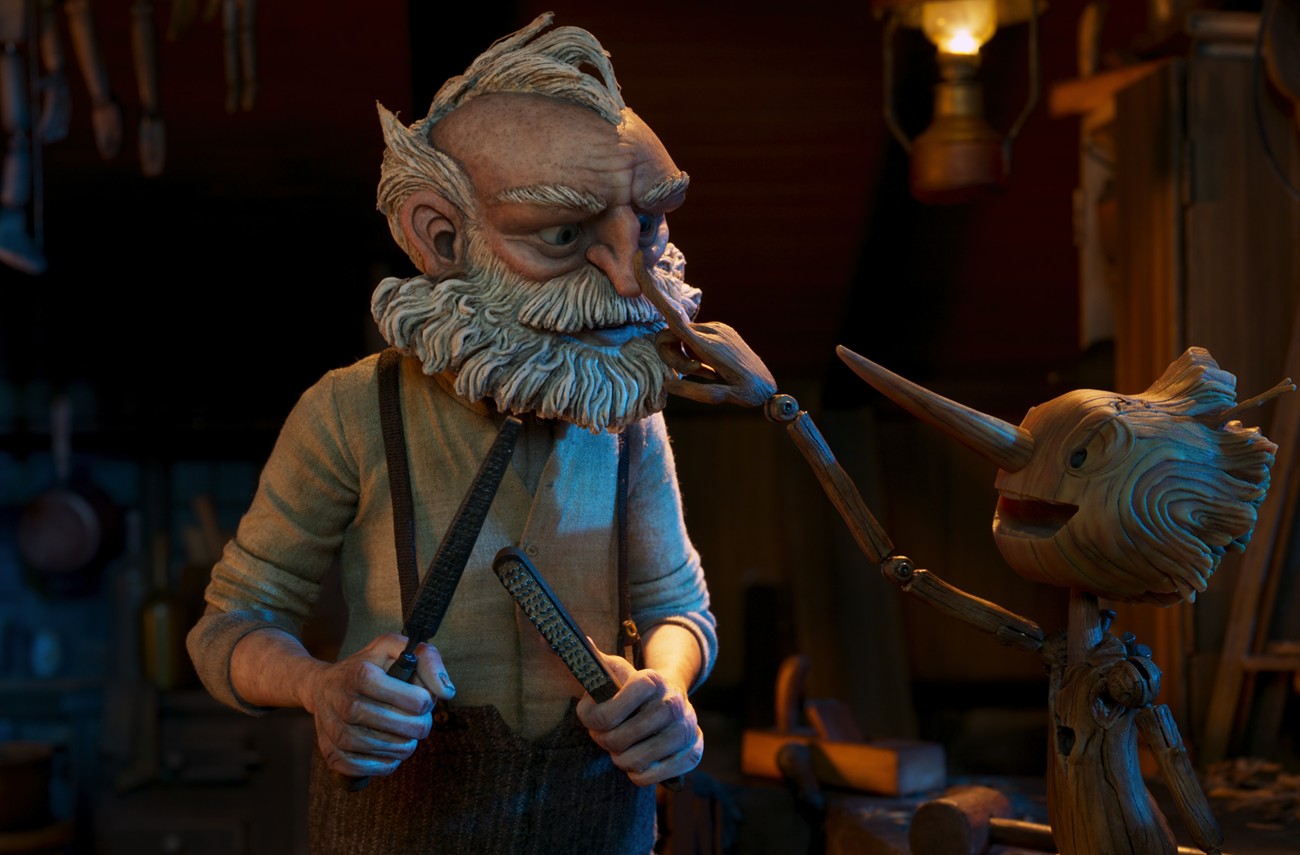 So you’re going to make a film adaptation of Carlo Collodi's 1883 children's novel The Adventures of Pinocchio and release it in 2022. How do you approach the material? If you’re Robert Zemeckis, you take the basic skeleton of the pre-existing 1940 Disney animated film and create yet another unnecessary live action remake. If you’re Vasiliy Rovenskiy, you cast Pauly Shore (not joking here) to voice the titular character in a cartoonishly bad trip that looks like a poorly-rendered '90s computer game. If you’re Guillermo del Toro, you do something a little different.

Guillermo del Toro's Pinocchio is titled to both distinguish itself from the aforementioned releases and to define itself as a vision of its director. It's a testament to both his creativity and those of the film's animators, many of whom were sourced from Portland's talented stop motion workforce.

Rich in detail and often darker in tone, del Toro's Pinocchio breathes new life into a fantasy story done to death. However, the awe-inspiring animation can't smooth out an, at times, inconsistent handling of the film's subject matter. What del Toro really wants to say seems to lurk in the corners of the story, while the majority of it stays rather light in a manner that teeters on the edge of being superficial.

Those familiar with del Toro's work know that one of his most returned to themes is war's devastating, rippling violence across the lives of civilians. With the film's co-writer Patrick McHale (Over the Garden Wall), del Toro has attempted to inject the perils-of-growing-up meets assimilationist fable with mature allegories of war and fascism in pre-WW2 Italy.

Del Toro's Pinocchio begins with tragedy, when the son of woodcarver Geppetto (voiced by a grizzled sounding David Bradley) dies in a blast—from a lone bomb, dropped on the church where they had both been working.

Geppetto creates Pinocchio in a drunken rage, in one of the film's most striking and emotional sequences, from a tree he planted in his son's memory. And while Pinocchio lives and brims with childlike exuberance, there is a growing sense that his existence is more like a curse. When he lies, his nose becomes jagged and sprouts leaves. When he dies, he is sent to an underworld that is both a silly and sinister purgatory. Even a monkey he encounters—voiced by Cate Blanchett in her second film of the year with a Portland connection—has a sadness that soon takes on a greater significance.

Del Toro's Pinocchio is far from conventional. In this regard, it shines. However, while the director managed to delicately thread a needle between the innocence of youth and the horrors of adulthood in films like Pan's Labyrinth, the same incisiveness is missing here. The narration of Ewan McGregor's Cricket feels unnecessary, and the score by Alexandre Desplat fills sad silences where quiet reflection would have cut deeper. Most damningly, much of how the film reckons with fascism and violence is made digestible to the point of being simplistic.

Such elements, understandably, seem to be part of a narrative sacrifice done to appeal more to children. However, as we recently saw in Wendell & Wild—another film animated locally—a youthful emphasis need not temper more sharp and subtle moments. Del Toro's Pinocchio lacks the same narrative poetry to back up its visuals.

Thankfully, that visual splendor still makes for an enthralling experience. Del Toro's Pinocchio remains among the absolute best animated works you’d be fortunate enough to see this year or any other.