CAMERA OBSCURA Yet again, they realized their hiking attire prioritized form over function.

WITH A FONDNESS for oldies radio and a knack for cut-to-the-quick lyrics, Camera Obscura ushered in a doo-wop revival on their 2001 debut, Biggest Bluest Hi Fi. Over the following handful of albums, Tracyanne Campbell's coolly soulful voice has provided the soundtrack to a decade's worth of musically discerning broken hearts.

My own dad, for example, only "discovered" them a year and a half ago while going through a divorce, though I had played them for him several times before then. Camera Obscura are now his favorite band, an honor previously held for 40 years by Crosby, Stills, Nash, and Young.

Camera Obscura recorded their two previous albums in Sweden. But after four years of silence, they chose to record their fifth, Desire Lines, with Tucker Martine at Flora Recording, his North Portland studio.

Martine has produced dozens of exceptional records (by the Decemberists and My Morning Jacket, among others), but Glasgow is about 4,500 miles via crow from the Rose City. The notion came from Portland-based troubadour M. Ward.

"It was Matt Ward who recommended Tucker to us," says Carey Lander, the band's keyboard player and chilled-out backup singer. "We were looking for change; we wanted to explore other sounds. And we've played in Portland enough to know that we really liked it. We really enjoyed staying there and eating good food and working in the studio. We were really delighted with Tucker, and it will be special to play a show there."

Desire Lines signifies a temporal leap forward for the band, though there are still glimpses of proto rock 'n' roll. The album basks in its own warmth, and it's easy to fall into the beautiful new-wave sheen that crops up both on melancholy songs like "New Year's Resolution" and on more buoyant tracks like "Break It to You Gently." These two songs in particular seem like follow-ups to the first two tracks on Biggest Bluest Hi Fi—"Happy New Year" and "Eighties Fan" (which Camera Obscura have proven themselves to be, all these years later).

"We need a worthwhile reason to keep going," she adds.

"Tracyanne had writer's block for a while and she found it quite hard to get some of the songs and lyrics finished, so we took a break," Lander says. "Then we each worked on them alone in our bedrooms. I spent quite a lot of time on this—finding ways to improve, make the songs better."

Lander's bedroom work is gorgeously apparent on the album. Her keys—both synth and organ—are essential to the sparkling texture of Desire Lines, more than on any other album.

Though this is Camera Obscura's first album in four years, they're playing just a handful of dates. "We're not 21 anymore, and people's lives need to have some importance and fit things around people's situations," Lander says. "Tracyanne is expecting a baby, so she'll need to take a few months off, and [guitarist] Kenny [McKeeve] had his first child last year."

Apparently the cycle of romance and heartbreak can only be maintained for so long before other, more nuanced emotions come into play. This is something the lyrics on Desire Lines seem to acknowledge. Though Campbell generally avoids discussing the words she sings, Lander concurs. "The album's not about romantic love so much as it is about relationships, and the band, and how they stay together." 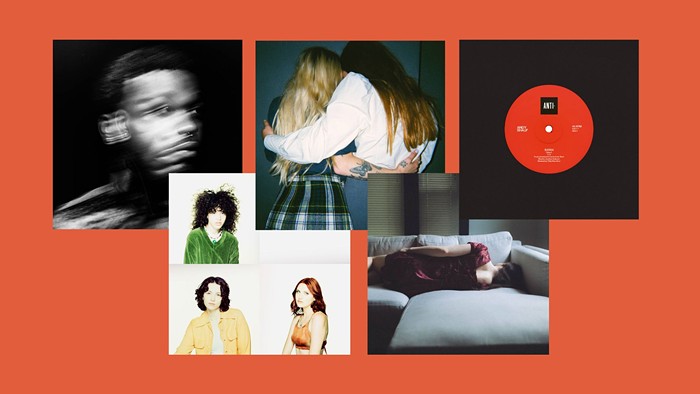