"I Just Want To Go Home"

THE PORTLAND POLICE BUREAU is facing heightened scrutiny this week after the fatal shooting of Aaron Campbell in Northeast Portland on Friday, January 29—police have told reporters that Campbell didn't comply with their orders to put his hands in the air and instead put them behind his head.

"The jail had called me and said he'd been arrested," says McKenzie. "But he doesn't know that you can make a phone call. When I called back down there they said he'd been released, and I was very concerned about what might happen to him."

Green, 34, is developmentally disabled and has a verbal IQ of 55.

What McKenzie didn't know was that earlier police had Tasered her grandson twice and pointed a gun at him on a TriMet bus. She didn't discover the truth until Green showed up at his North Portland home in the early hours of the morning—having walked almost five miles from the downtown justice center.

"He was out of it," she says. "They hadn't given him his medication at the jail, even though I'd told them he needed it. And it was cold—you know what it was like in December."

Earlier that day, Green had ridden the MAX to the Rose Quarter Transit Center after visiting his cousin in Gresham. He and other passengers were not allowed to board a bus after the driver explained that the displayed route number was incorrect. Failing to understand, and shivering without gloves or a hat in the midst of a cold snap, Green boarded a nearby bus hoping to get warm, at about 9:30 pm.

A TriMet bus video (which you can watch on the Mercury's website) shows Green boarding the second bus without any apparent problem. Green flashes his Honored Citizen TriMet pass to the driver, who is wearing festive reindeer ears. Ninety seconds later, Beaverton Police Officer Keith Welch boards the bus.

Despite being a Beaverton cop, Officer Welch was working in the Rose Quarter under an agreement between law enforcement from Portland, Beaverton, Troutdale, Milwaukie, and Gresham to patrol TriMet as part of the Portland Police Bureau's Transit Division.

"I just want to go home," said Green, according to Officer Welch's report. "I'm not doing anything wrong!"

Green continued to keep his hands inside his coat and stare blankly at Welch, according to the report. Welch threatened to Taser Green, who "appeared to become agitated," wrote Welch.

Welch Tasered Green, then drew his semi-automatic pistol as he radioed for cover. Portland Police Officer Jack Blazer showed up within a minute, and Tasered Green again before removing him from the bus.

The officers charged Green with interfering with public transportation, interfering with a police officer, and possession of a controlled substance—mistaking his seizure medication for ecstasy. The drug charge was later dropped, and Green's criminal defense attorney Noah Horst is having him assessed for a possible inability to aid and assist in his own defense on the other two charges.

"It hurt," says Green, describing being Tasered. "I just wanted to get home. [Being Tasered] was like the first time I had a seizure—I didn't know what I was getting my ass whooped for. It's not right."

This story comes after a recent landmark ruling by the 9th Circuit Court of Appeals about Tasering suspects with mental health problems. The court ruled last December that officers should consider whether a suspect poses an "immediate threat" before using the less-lethal weapons.

Green's attorneys, however, are concerned that the outcome of the situation could have been much worse.

"Given the fact that he did not seem able to understand the reason or seriousness of the commands and was being held at gunpoint by an officer who made the decision to Tase him quickly, it's not a real stretch to imagine that he could have been shot, in a different scenario," says Joel Greenberg with Disability Rights Oregon, who has lodged a complaint about the incident with the two police departments, on Green's behalf.

Police are taught early on that if they can't see a suspect's hands, "it's a big red flag," says Portland Police Bureau spokesperson Mary Wheat.

"After an incident, it's easy for people to come back and have all the information," she adds. "But at the time, the officers are dealing with just what they're seeing in the moment, and they have to protect public safety."

Either way, McKenzie has some strong advice for Green in the future.

"I told Jamal if you ever get picked up again they'll allow you one call," she says. "Tell them you want to call your grandmother."

Green's attorneys are also concerned that recently introduced Crisis Intervention Training (CIT) for Portland police may not be working as well as it could. The new CIT curriculum was introduced across the board to train officers in diffusing situations where mental illness or disability is a factor, after the 2006 death in custody of James Chasse, a man with schizophrenia.

"It appears that the officers failed to recognize that Mr. Green suffers from severe mental disability," says Horst. "I am concerned that CIT hasn't effectively prepared our police officers to respond to our mentally disabled and mentally ill citizens."

Police oversight groups have also expressed concern in the past about allowing officers from suburban jurisdictions like Beaverton to work in Portland, where mental health issues are more common on the streets ["Compelling Testimony," June 26, 2008]. The city's Independent Police Review division also has limited power to investigate the actions of officers from other jurisdictions, even if their activity happens here in Portland as part of the bureau's transit division.

"It could be mental health, it could be recognizing drug impairment, it could be about interacting with the elderly," says Yazzolino. "We're talking about recognizing some kind of mental impairment. There's also at least two specially trained officers on duty, per shift, so if we need someone, we can call them to a scene and say, 'Hey, help me assess this situation.'"

"The whole training is, 'what are you seeing, and how would you describe it,' and 'what are the clues that would tell you, this doesn't look like everything else that you'd normally see?'" says Gerritsen, with the Portland Police Bureau.

"So in general terms if somebody is sitting on a bus and he's got a jacket on and he's not talking, and he's got his hands in his pockets, the first concern is always going to be an officer safety concern," she says. "And then you do all the right things. But that's always the rub, is that at what point do you recognize that something is off?"

Comments 47
Tags: News City
If you enjoy articles like this, please help the Mercury continue our mission of providing up-to-the-minute information, progressive journalism, and fun things to do in Portland by making a small recurring monthly contribution. Never forget: Your help is essential and very much appreciated!
CONTRIBUTE NOW 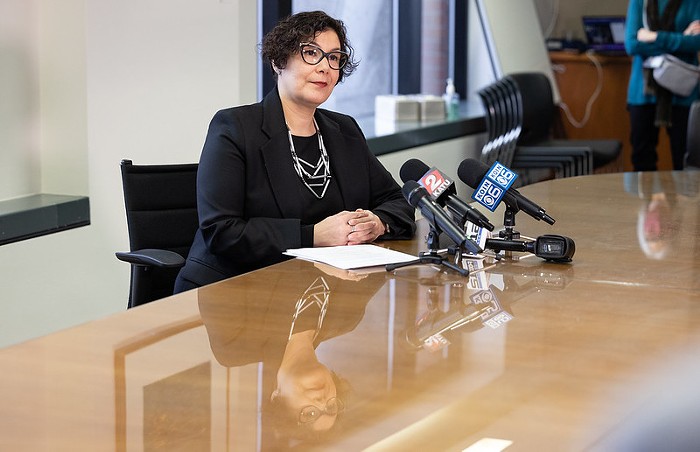