And Just Like That, Portland's Finally Talking About the Minimum Wage 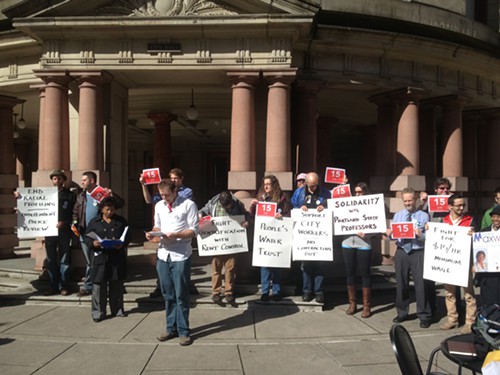 It's surprising what can bloom in this city with even the slightest provocation.

For months and months, protestors around the country took to the streets to complain of low wages at the nation's fast food chains. Portland was mum.

In Seattle, the hubbub swelled and stretched, to the point the city spurned an established incumbent to elect its first socialist city councilwoman in November. That councilwoman, Kshama Sawant, has been forceful (unbending, even ) in demands that the city increase its minimum wage to $15, now. (That campaign is called 15 Now.)

And Portland—progressive reputation and all—hadn't uttered a peep. The largest debates lately have been concerned, as usual, with the water system.

Then Nick Caleb, a 30-year-old Concordia University professor and attorney—somewhat on a lark—decided to run for city council against Commissioner Dan Saltzman on Monday, calling for a quixotic $15 an hour wage and a host of other reforms. And today, four days later, some of Portland's noisiest activists are engulfed. 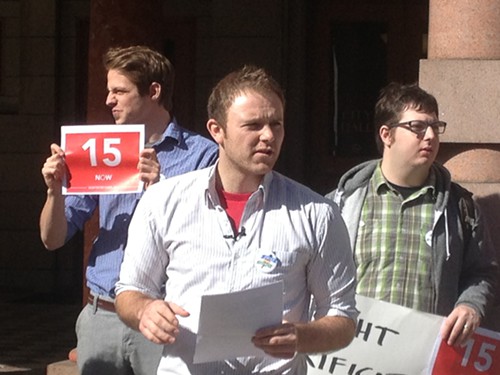 At a news conference in front of Portland City Hall this afternoon, Caleb stood with another city council candidate (Sharon Maxwell, taking on Commissioner Nick Fish), and some of the city's most-vociferous voices, to formally launch his campaign and call for a $15 wage. The crowd waved 15 Now flyers, and a picket "showing support for workers" was announced tonight, outside the McDonald's at NE Grand and Weidler. Caleb and others said they'd been in contact with members of Sawant's campaign, and are working to emulate her success in the Rose City.

Just like that, Portlanders are ready to force these discussions. Or at least that's how it seemed this afternoon.

Aside from that $15, Caleb's ideas cohere with many of the debates that have bubbled near the surface for months now.

And he's pushing a more compassionate approach to the thorny issues of homelessness and gentrification.

"Everyone has a right to the city," Caleb said today, to cheers.

Which brings us back to a hike in the minimum wage. Oregon's already ahead of the curve in some respects, since we tie our minimum wage to inflation. But, as Denis pointed out this week, that happy development came at a cost: cities no longer have the authority to set their own minimum wage.

That's not something Caleb was aware of until he was asked by the Mercury.

"It took me a whole 30 minutes to come up with a plan" after learning of the restriction, he said today. He poked fun at Saltzman, who told the Mercury he supports a minimum wage, but said Portland's powerless.

"We can be creative," Caleb said, pointing out the city can use its lobbyists to fight for the current minimum wage laws to be overturned. He also proposed taxing companies who employ low-wage workers, putting that money into a fund, and subsidizing wages through that pool.

Caleb's campaign won't accept any donations of more than $50, he said (Maxwell made a point of saying she would) and he pledged to spurn a typical commissioner's salary (more than $100,000), saying he'd take the wage of an average Portland worker (according to the Portland Business Journal, just under $47,000 in 2012), a concept he cribbed from Sawant.

He announced his candidacy late, Caleb conceded, thinking that it might be an "interesting learning experience." But in light of the support he's heard— the online messages, the signs and cheers, the guy who asked after the press conference if it'd be okay if he gave $100 for his wife and he, both—Caleb said: "I'm starting to believe, myself."

Comments 22
Tags: News Election 2014 Blogs
If you enjoy articles like this, please help the Mercury continue our mission of providing up-to-the-minute information, progressive journalism, and fun things to do in Portland by making a small recurring monthly contribution. Never forget: Your help is essential and very much appreciated!
CONTRIBUTE NOW