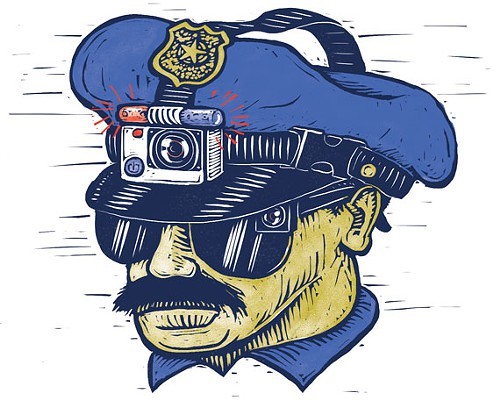 The leader of the city's rank-and-file police union has taken issue with Mayor Charlie Hales' recently declared interest in outfitting patrol cops with body-mounted cameras—raising concerns about the overall usefulness of the cameras, questioning the police bureau's diligence, and telling officers that any such program would first need to be hashed out with union brass.

In a letter to his members, obtained by the Mercury, Portland Police Association President Daryl Turner enumerated 11 specific concerns/points, ranging from the cost of purchasing and maintaining the cameras to worries that officers will need to divert more time from patrolling their beats to worry about uploading and reviewing video.

Turner says he heard about the program only through media reports (the Oregonian first reported Hales' interest in shifting unspent money initially earmarked for dashboard cameras), and that the PPA has yet to officially oppose or support body cameras.

"The PPB’s desired implementation of body cams immediately triggers several subjects of mandatory bargaining, including officer safety, discipline, job security, minimum fairness, and workload concerns," Turner writes. "Before body cams are implemented, the PPB needs to carefully develop the body cam program and associated policies with the PPA to account for operational realities and collective bargaining issues. The PPA has many concerns that need to be addressed and resolved."

Body cameras were called out by the federal judge who signed off, last month, on a package of police reforms negotiated between the city, the federal Department of Justice, the PPA, and the Albina Ministerial Alliance Coalition for Justice and Police Reform. The cameras have become increasingly popular nationally as a means of reducing use of force—but also in reducing potentially frivolous misconduct complaints.

The reforms are meant to answer accusations that Portland police officers engaged in a pattern or practice of using excessive force against people with, or perceived to have, mental illness. US District Court Judge Michael Simon asked about cameras while evaluating the reforms. He noted that the cameras weren't included when he signed off on the agreement August 29, but said it wasn't enough of a reason to reject it.

Turner, later in his letter, took the judge, the feds, and the mayor to task for, as he put it, failing to abide by "the most important component to the success" of the federal deal: Increasing "the authorized staffing level of PPB by 20 percent." In the fall of 2012, the city approved new expenditures and positions for the bureau in light of the expected reforms. But in 2013, the city council also cut the overall number of authorized officers, avoiding layoffs by allowing the bureau to gradually ease the number down through retirements and departures. This year, the council held the line.

Although rumors of body cams have been swirling around for a few weeks, the Portland Police Association (PPA) learned of the PPB’s intent to implement body cams only through Mayor Hales’ statement to the press. The PPA has not taken an official stance regarding the implementation of body cams as we continue to research the issue and discuss the feasibility of body cams with our members and the Portland Police Bureau (PPB). The PPB’s desired implementation of body cams immediately triggers several subjects of mandatory bargaining, including officer safety, discipline, job security, minimum fairness, and workload concerns.

Before body cams are implemented, the PPB needs to carefully develop the body cam program and associated policies with the PPA to account for operational realities and collective bargaining issues. The PPA has many concerns that need to be addressed and resolved.. Below are just a few of our concerns.

2. Body cams may show less than what officers see/heard/observed.

3. Body cams may show more than what officers see/heard/observed.

4. Body cams cannot account for an officer’s physiological responses during critical incidents, such as visual tunneling and auditory exclusion.

5. Body cams shouldn't be viewed as a measure of truth. They have an important but limited use.

6. Body cams are a policing tool. No more, no less.

7. Oregon law will need to be changed. Current Oregon eavesdropping law provides an exception for intercepting communications on dash cams but not body cams.

8. Increased work load issues with officers downloading content from body cams during or after shift creates new staffing issues. This equates to fewer officers patrolling, putting the PPB below minimum staffing levels. Also, increased workload to patrol sergeants who must review all body cam footage for after action reports.

9. PPB has not done enough practical research on different types of body cams in regard to the quality, cost, applicability, and sustainability of the system.

10. PPB spent hundreds of thousands of dollars of taxpayer money on a dash cam project just to abandon it for body cams. What assurance do taxpayers have that the body cams won't follow the same fate?

11. The PPB needs to consider the costs beyond purchasing the cams themselves, including the retention of camera footage and the costs associated with public records requests for body cam footage.

The USDOJ, Judge Simon, and Mayor Hales have all ignored the most important component to the success of the USDOJ / City of Portland Agreement. The Portland City Council needs to increase the authorized staffing level of PPB by 20%. Resources for the mentally ill and those in mental health crisis, community policing, diversity in the bureau, and the ability to continue to meet the evolving needs of all the communities of Portland depend on having enough officers on the ground. We simply don’t have enough bodies.

As the organization that represents almost 900, officers, sergeants, detectives, and criminalist, the PPA has a responsibility to its members and the community that it serves. That responsibility includes making sure that the PPB provides its sworn employees with the best, safest, most effective tools possible to enhance service to the community. That responsibility also includes making sure that the taxpayers’ hard earned dollars are not wasted on failed projects and faulty equipment that cost millions of dollars.

Although body cams are becoming more popular in police agencies across the country, the PPB needs to take a thoughtful approach to any new policing tool. There are many issues to consider and address. If body cams are to be a useful policing tool, the PPB must work with the PPA to develop a policy that's applicable for use by officers and sergeants on the street.

Comments 9
Tags: News Cops Blogs
If you enjoy articles like this, please help the Mercury continue our mission of providing up-to-the-minute information, progressive journalism, and fun things to do in Portland by making a small recurring monthly contribution. Never forget: Your help is essential and very much appreciated!
CONTRIBUTE NOW