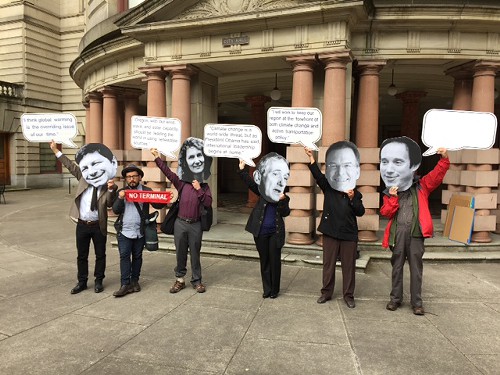 If today's out-of-order protest was any indication of the coming fight, Portland’s propane proponents are going to have a tough time over the next few months trying to get a fossil fuel storage and export facility built at the Port of Portland.

Portland City Council this morning was poised to hear testimony on Portland’s proposed 2030 Environmental Performance Objectives when six activists from the Portland’s Climate Action Coalition (armed with giant cutout heads of the commissioners and carrying accompanying talk bubbles; it was a little surreal) threw Robert’s Rules of Order right out the window and took the public meeting over for a short time, much to the exasperation of Mayor Charlie Hales and the rest of council.

Kelly O’Hanley read from a prepared script as if she was speaking as a collective voice for the disembodied heads, calling themselves out (I know, confusing) for giving lip service to combating climate change while not doing enough about it.

“Today, despite what you might of heard in the media, we would like to remind Portland residents of what we have said in the past about the importance of taking strong, local action to fight climate change,” O’Hanley read as Hales tried, unsuccessfully, to regain order. “Tying our city to an enormous fossil fuel export facility for many decades obviously would contradict Portland’s prior commitments to leadership on climate change policy. No amount of money can shake our resolve to do what is in the best interests of future generations and say no to Pembina.”

The group was there to protest a proposed $500 million propane plant that Canada-based Pembina Pipeline Corporation wants to put in at the port. Opponents say the deal with Pembina—which wants to freight in propane via 1.3-mile-long trains, store the liquid in huge tanks, and pipe between 36,000 and 72,000 barrels a day of it onto floating storage tanks for transfer onto giant ships for export—flies against everything “green” Portland stands for.

Sometime in the middle of the speech, Hales got exasperated and he and rest of council evacuated. When O’Hanley finished (amid some hoots and whistles of support from the audience) she and the talking heads left quietly and the otherwise orderly meeting resumed.

A decision on the proposed zoning change from city council is the next step towards Pembina's approval, but hundreds of protestors at an April 7 Bureau of Planning and Sustainability Commission hearing reminded policy makers their path isn’t going to be a smooth one.

This all started in October 2014 when the Mercury reported that Pembina and the port had hit an unexpected policy problem: a proposed pipeline for the project ran afoul of the city’s zoning code. More specifically, the pipeline would traverse an environmental overlay zone, put in place to protect waterfowl and other wildlife along the riverbank.

To get a zoning change completed, the issue must first get past the planning commission—which it did by a 6-4 vote—before the final decision is taken up by city council. They were tentatively scheduled to vote at the end of April, but the hearing has been pushed back to an undetermined date.

Protestors are willing to wait.

“They’re going to have a long row to hoe if they want to get this done,” said Chris Fountain, one of the talking heads from today’s event. “And we’re going to be there to stand in their way.”

Here is a super fancy version of the full video:

Comments 5
Tags: News Blogs
If you enjoy articles like this, please help the Mercury continue our mission of providing up-to-the-minute information, progressive journalism, and fun things to do in Portland by making a small recurring monthly contribution. Never forget: Your help is essential and very much appreciated!
CONTRIBUTE NOW