We've Got Data! Uber and Lyft Were Quicker, and Growing More Popular, in May.

If you grabbed a ride with Uber or Lyft in May, you probably had a shorter wait than your cab-calling counterparts—particularly those of you looking for a lift from the cloistered claustrophobia of the West Hills.

In the first full month Transportation Network Companies (TNCs) like Uber were allowed to operate legally in Portland, customers using their cell phones to hale the services waited an average of six minutes for pickup. Cab customers were waiting around an extra four minutes before their rides arrived, on average.

How do I know this? Because of the city's much-heralded data-sharing agreements with cabs and TNCs—part of a four-month pilot project that blew up Portland's for-hire transportation system in late April. Check out some charts! 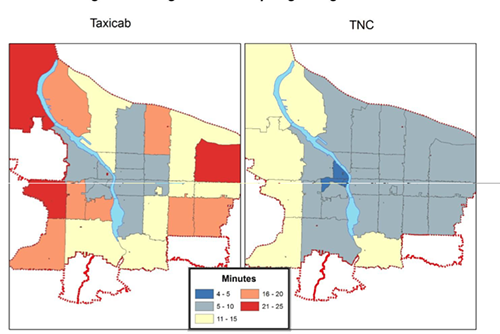 The early numbers don't look great for cabs. While the city's taxi companies logged 30,000 more trips than TNCs in May (130,000 vs. 100,000) a report [pdf] that'll be submitted to Portland City Council next week suggests that might no longer be the case.

"In general, taxicab companies provided more rides than TNC companies, but TNC companies saw many more trips toward the end of the month, suggesting that they may have greater overall ridership in coming months," the report says.

It's worth noting that the PBOT's numbers don't include people who flagged cabs on the street or hopped into a cab at the airport, meaning the taxi trip numbers are low. Uber and Lyft, per the city's rules, aren't allowed to pick up people who flag them down.

But while the new report's a repository of data—with plenty to offer on when and where trips began and end, and peak demand times—it's devoid of some of the details many are likely most curious about. Things like: how many collisions taxi and TNC drivers were involved in (that data has to be shared with the city) and how many drivers have been disciplined for breaking the city's new rules.

Another highly watched metric, how long it takes cabs and TNCs to pick up customers who need wheelchair-accessible vehicles (WAVs), offers only tenuous results.

The city says TNCs took an average of 10 minutes to pick up 200 WAV requests in May. That's well in-line with standards PBOT set for service to wheelchair-bound customers, but it runs contrary to horror stories that have surfaced over long waits for TNC-based WAV vehicles. In May, OPB reported on a man who tried for 9 hours to get an Uber-provided van to pick him up. (Yesterday, Uber announced the launch of UberASSIST, which accommodates people with folding wheelchairs, walkers and scooters.)

PBOT says the data for taxi-provided WAVs appears to have been muddied by trip reports based on the contract services some of those companies provide, and so didn't offer a clear picture. With that imperfect data in mind, the bureau says the average wait time was 23 minutes.

As to customer complaints, they may be rising. PBOT fielded 13 complaints in May. That trend, if continued, would result in 156 complaints in a year. There were 90 in 2014.

As has been the case for months, taxi representatives are displeased with the pilot program, while TNCs offer chipper soundbites.

Kelliann Amico, spokeswoman for the cab conglomeration the Transportation Fairness Alliance, says cab fares are down for drivers across the board.

"If you talk to the individual drivers, it's terrible," she says. "It's a huge dent."

PBOT says it doesn't have cab data for May 2014, so can't say just how much Portland's taxi business has been hurt by Uber and Lyft.

Asked about the longer wait times for cabs, Amico says companies are still smarting from past requirements that 20 percent of their fleets be able to accommodate wheelchairs.

"All these companies have invested in additional wheelchair-accessible vehicles, and they don't have money to invest in new cars," she says. Under Portland's four-month pilot project, cab companies that were once tightly regulated are allowed to unleash as many cabs as they want on city streets.

Lyft meanwhile, says it's vindicated by the new stats.

"Today's data report demonstrates the strong demand in Portland for additional transportation options, like Lyft," spokesman Chelsea Wilson said in a canned statement. "With Lyft, Portland residents from all over the City are experiencing shorter wait times for transportation, particularly during the weekend and late night hours."

Dig into the report yourself.

Tags: News City Hall Transportation Blogs
If you enjoy articles like this, please help the Mercury continue our mission of providing up-to-the-minute information, progressive journalism, and fun things to do in Portland by making a small recurring monthly contribution. Never forget: Your help is essential and very much appreciated!
CONTRIBUTE NOW