For all the rancor that's been tossed around in the last several months, it turns out Portland really likes Uber.

Since the company gained formal entree into the city in late April, Uber and its rival, Lyft, have snatched the bulk of "for-hire" transportation from the city's longtime cab companies, according to new data [pdf] released by the Portland Bureau of Transportation (PBOT). Those numbers come from data-sharing agreements the city inked with cab companies and "Transportation Network Companies" (TNCs) Uber and Lyft early in the year.

According to city data, TNCs quickly swiped market share from the city's seven existing cab companies (an eighth has since emerged), winning 60 percent of business in August. Over the course of the pilot period, cab companies saw a 16 percent drop in business, the city found. At the same time, though, demand for cabs and TNCs shot up by 40 percent between May and late August.

"These numbers strongly suggest that prior to the PFHT Innovation Pilot Program, consumer demand for paid transportation services far outpaced the available supply of taxicabs in Portland," the PBOT report says.

The data's not much of a surprise. In a preliminary report issued this summer, the city found that Uber and Lyft had already nearly overtaken cab companies. There was little doubt that TNCs were growing in popularity. While cab companies and TNCs saw about equal demand in June, Uber and Lyft increased rapidly in popularity by the time July rolled around—with the highest demand happening on the weekends. 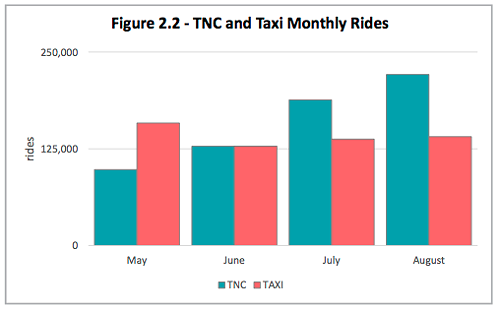 It's not easy to pinpoint what, precisely, the added competition has meant for the city's taxi companies, because we don't have reliable data for how their business looked before Uber and Lyft rolled into town. To try to get an idea, though, PBOT pulled date kept by the Port of Portland showing how many people are picked up and dropped off by cabs at PDX. Here's that data.

The "street hails" that occur at the airport are an important segment of taxi business, and PBOT notes they increased by around 3 percent between May and August. That didn't much matter, though, because tourists apparently opted for Uber or Lyft by large margins when seeking a ride from their hotel. Street hails for cabs from hotels fell by a stunning 60 percent.

Another thing consistent with the report PBOT issued in July: TNCs get to customers faster, on average, than cab companies. This figure is partly muddied, PBOT, by incomplete data from cab companies (since they don't do all their business on an app like TNCs, getting reliable information is a little tougher). But the findings are about the same. While taxis have a higher percentage of drivers getting to customers in under a minute (about 12 percent!), they've also got a higher percentage of drivers taking more than 20 minutes to reach their passengers (6 percent!).

•Demand for cabs and TNCs shot up in East Portland, but still counted for 8 percent of cab business and just 3 percent of TNC rides from May to August. Still, East Portland appears to be warming up to Uber and Lyft more quickly, too.

So how are cab companies and TNCs reacting to the data? The Transportation Fairness Alliance, a conglomeration of cab companies formed in the face of Uber's push into Portland, says that it hasn't seen the data, doesn't understand the point of it, and claims Uber got an early look at the findings, but no one else did.

"Given that we have not seen this second round of data gleaned from the now extended trial period—even as our understanding is that Uber did see it before the news media—we are not in a position to comment," the TFA says. "We can offer, however, that there has never been a clear indication of the end purpose of the data, nor has there been a guarantee that the data we provide will be held in confidence and not shared with our competitors."

Lyft? It's pleased. "The City's report illustrates the strong consumer demand for transportation options like Lyft in Portland," the company says. "According to the data, wait times for passengers have decreased across the board and access to service is expanding for all."

Here's one interesting thing about all this. It could be set to change. Last week, Oregon Labor Commissioner Brad Avakian released a non-binding opinion hinting strongly that his Bureau of Labor and Industries (BOLI) would rule that TNC drivers are technically employees, if and when a complaint is filed. That could set a precedent that would force Uber and Lyft to provide minimum wage, worker's compensation, and other protections.

Comments 5
Tags: News City Hall Transportation Blogs
If you enjoy articles like this, please help the Mercury continue our mission of providing up-to-the-minute information, progressive journalism, and fun things to do in Portland by making a small recurring monthly contribution. Never forget: Your help is essential and very much appreciated!
CONTRIBUTE NOW