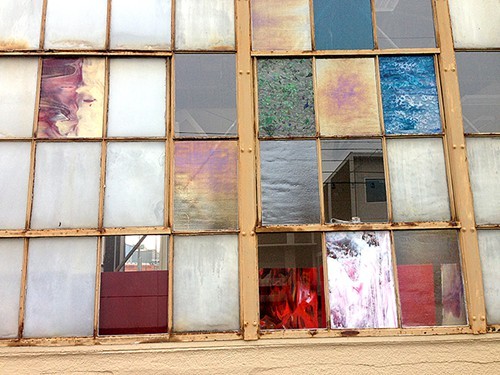 NEARLY SEVEN YEARS before Portlanders learned that glass factories in town have been sending harmful heavy metals, unabated, into Portland’s air, federal and state officials came close to tracking down one of the sources of those emissions.

But for a series of missteps, the Mercury has learned, Portlanders might not currently be having their children tested for carcinogens like cadmium and arsenic—toxic materials used to color glass made by Uroboros Glass in North Portland, and Bullseye Glass in Southeast. According to people familiar with the situation, federal and state regulators had zeroed in on Uroboros and nearby facilities as a potential source of cadmium as early as 2009.

That year, prompted by a USA Today series on toxic air near schools nationwide, the US Environmental Protection Agency (EPA) installed an air monitor for nine weeks in the late summer and early fall outside Harriet Tubman School. The North Portland middle school building sits across I-5 from Uroboros, which is visible from Tubman’s back lot.

Some of the 2009 results were alarming—if not off the charts like the data the Oregon Department of Environmental Quality (DEQ) collected in October 2015 monitoring near Bullseye. (Bullseye has a larger operation than rival Uroboros.) Some readings showed levels of cadmium 38 and 39 times the state’s safe-air goals—numbers that suggest an increased risk of cancer or other illnesses for people routinely exposed over long periods of time.

And to their credit, the EPA and DEQ recognized that the Tubman data should prompt further investigation. It just took them a year and a half to get around to it.

In 2011, the EPA funded a cursory, too-short air-monitoring program at Tubman. It was motivated, at least in part, by the agency’s desire to field-test a new piece of equipment. But it failed to nail down the worrisome cadmium’s source.

“Those 2009 levels didn’t reappear in 2011,” said Madonna Narvaez, the EPA’s regional senior air toxic specialist based in Seattle. “It could have been the sourcing was temporary. Or we just did the monitoring for too short a time. Or there were different winds.”

Given the limited funding for the monitoring program, Narvaez said, “That was the best we could hope for.” The EPA handed the matter back to DEQ, stating in a later report that the state agency would “continue to oversee industrial facilities in the area through air permits and other programs.”

DEQ, after all, had the ground-level responsibility for air safety in Portland, according to now-retired DEQ Air Quality Planner Gregg Lande. And among that front-line agency’s staffers, there was skepticism about the monitoring they’d just undertaken at the EPA’s direction.

“It wasn’t long enough,” said Anthony Barnack, a DEQ ambient air-monitoring coordinator. “I don’t know if anything made us understand any better where the cadmium was coming from.”

That view is echoed by Krag Petterson, vice president of Beaverton-based Cooper Environmental Services. The company sold the EPA its advanced air-monitoring system, the Xact 625, which is prized for its ability to take hourly air samples, as opposed to a standard instrument’s 24-hour readings. The equipment has since performed well and is used widely in China, but its installation at Tubman in 2011 marked its first ever use.

Petterson, who oversaw the 2011 monitoring, said it should have been for a longer period of time. “To identify the source of the cadmium, I’d want to be there longer and incorporate other metals as a potential fingerprint,” he said.

He also noted the 2011 monitoring’s timing was off for a true comparison, given the wind’s variability with the seasons. It occurred in June and July. The 2009 monitoring that sparked concerns took place primarily in the fall.

But the EPA was eager to move the new equipment elsewhere. It wanted to ship the Cooper instrument to Ohio for further testing and use. After all, the agency invested just shy of $400,000 in grants to develop the new technology and then purchased the first one produced. It wanted to see what it had, Petterson said.
Paul Koprowski, an EPA air program coordinator, said a big part of the 2011 Tubman study was simply “to test the new monitor…. We didn’t yet have knowledge of how it would work.”

In fact, the EPA’s air monitor wasn’t sensitive enough to pick up levels of cadmium that could be concerning. With the sample time set for one hour, the monitor’s ability to detect ambient cadmium—its Minimum Detection Limit of 10.3 nanograms per cubic meter of air—was too high to prove useful at Tubman. The state’s ambient benchmark for cadmium is 0.6 nanograms per cubic meter.

While the fancy machinery didn’t turn up much, a traditional instrument employed as a back up did find some concerning levels of the heavy metal, but not nearly as bad as in 2009. According to the EPA’s Narvaez, those results were “not wholly definitive.”

DEQ did try other strategies for finding the cadmium’s source. In December 2009, four staffers spent a day visiting the small factories down the bluff from Tubman, including Uroboros. It was far from an adversarial investigation. Staffers just knocked on the door armed with a pre-printed form and asked general questions about Uroboros’ use of toxic materials.

When told of the four dates that cadmium levels were of particular concern, Uroboros simply said they used no cadmium those days. The state workers left.

(Interviewed at his factory prior to the Mercury reporting a story on the glass makers’ emissions, Uroboros owner Eric Lovell referred several times to exculpatory data regarding his 2009 production schedule and DEQ’s elevated cadmium dates. Yet he refused to provide it, saying, “No, it’s not in a good format.” Urged again, he said, “The woman who typed it up has retired.”)

The DEQ staffers would have had good reason to press the factories harder. According to a November 2010 memo authored by DEQ’s Lande, the 2009 cadmium results “were similar in magnitude” to what DEQ had found at a nearby monitoring station in 2005, thus “confirming the higher concentrations in this part of the city.”

And, Lande noted, the 2009 data “seemed more indicative of a nearby small source.” DEQ knew it was a factory of some sort near Tubman, it just didn't know which one.

The 2010 memo says the agency checked its own and EPA’s emission inventories, but nothing pointed to a specific source near Tubman. It considered permitted sources further afield in North Portland, but found no relevant emitters of cadmium. It checked its water quality and hazardous waste programs. It also checked meteorological data and determined that the source could be either northwest or to the south of its two monitors.

In the end, despite the troubling 2009 results, despite the evidence that a small factory near Uroboros was likely the source, and despite use of state-of-the-art equipment, a 2012 report noted, “DEQ has found no explanation for cadmium emissions to date. Emissions may be coming from an area source or an unpermitted commercial facility. DEQ intends to investigate this further.”

It wouldn’t be the first time the agency missed out on Uroboros’ emissions. Eric Miller, a Portland man who worked for Bullseye for two years in the early 1980s and was a Uroboros batch formulator and equipment manager from 1984 to 1994, mixing the glass maker’s raw ingredients, tells the Mercury he pressed the agency to scrutinize his employer.

While on staff at Uroboros in the 1990s, Miller encountered a DEQ inspector on site, he says. He’d long expected harmful emissions coming from the factory, and wondered if the DEQ was measuring properly.
“I told him if you come back at this certain time, you’ll find [the results] worse,” Miller said. “But it didn’t happen.”

Miller explained that the conversation occurred up on Uroboros’ roof, as the inspector was inserting an air monitor into the company’s exhaust flue. “I told him, when the stuff is thrown in, it’s intense. I told him it’s really intense some times,” he said.

Asking the inspector if he was sure he was sampling correctly, Miller was told the results were averaged over time, and on that basis, Uroboros was in the clear.

Aside from the fact that the tests were taking place when heavy metals weren’t being cooked, Miller said that in at least one case the DEQ probe was left attached over the weekend, and that Uroboros at that time melted no glass on Sundays. Any time-weighted results would have been skewed.

Miller says he even questioned Uroboros owner Eric Lovell, "But Lovell just said to me, ‘Why should we listen to you? DEQ says everything is fine.’”

He added: “There’s no way they couldn’t have suspected what was coming out of that flue.... They want to do the right thing. But they don’t want to spend the money to do it. And no one forced them to.”

Today, hundreds of kids go to school at the Tubman building within close proximity of Uroboros’ stacks, while their home school, Faubion, is being retrofitted. And Portland Public Schools is thinking of turning the building into a permanent middle school.

•Bullseye Glass' Sales Were $19.8 Million Last Year. Pollution Controls Would Have Cost A Tiny Fraction of That.