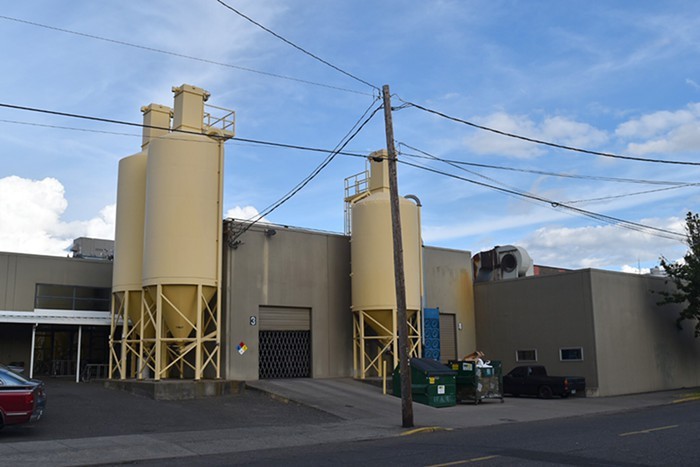 The high-wire negotiations between Gov. Kate Brown and Bullseye Glass have stalled. Leah Feldon, a special assistant to Oregon Department of Environment Quality (DEQ) Director Pete Shepherd, told the Mercury a short time ago, “Right now I can confirm that we did not reach an agreement today and that there won't be an agreement reached today.”

As a result, according to a statement from the governor's office, the 10-day cease and desist order preventing Bullseye from making some 80% of its product line will be in place for the ten days following the initial order's expiration on May 29.

This followed an awkward scene at DEQ headquarters this morning at the convening of a public session of what's referred to as the “Art Glass Permanent Rulemaking 2016 Fiscal Advisory Committee.” At that meeting, Bullseye Glass's representative—the company's controller Eric Durrin—was not present. Lani MacGregor, Bullseye's co-owner, said Durrin was closeted with lawyers trying to work out a deal with DEQ; and that DEQ had given Bullseye a noon deadline. She asked to take Durrin's place at the committee table, but was denied.

As the Mercury reported this week, the cease-and-desist order issued by Brown on May 19 was unprecedented, and was the direct result of Bullseye dramatically increasing its use of lead for two days earlier this month.

"The agencies anticipate ongoing discussions with the company to reach a durable resolution of public health threats from the company’s operations," a statement from Brown's office says.

A memo from the Oregon Health Authority and DEQ to Brown states: "The cease and desist order remains the best option for ensuring the continued protection of children attending a day care center located nearby and any other persons in the vicinity of the facility."

DEQ made clear in a statement from spokesperson Jennifer Flynt that the agency and Bullseye both remain committed to hammering out a solution. But it's unknown when negotiations might resume.

The company and the agency have exchanged proposals over the last few days, but an agreement is currently out of reach. Asked the hurdle, DEQ's Northwest region manager, Keith Johnson, said, "I can say that DEQ made a proposal in the form of an order, to Bullseye. I won’t and can’t speculate on why Bullseye didn’t sign the order in the deadline provided."

Bullseye did not reply to a request for comment. Bullseye's lawyer Jeffrey Hunter indicated that negotiations were ongoing and hung up.

What seems clear is that the DEQ no longer trusts the company. The agency's request that Brown renew the order indicated it was miffed that Bullseye sought to deflect blame for the high lead readings of May 9 and 10.

“Such claims by the company continue to indicate a lack of recognition of the impacts that its operations have to the surrounding community,” it said. “The air monitoring data indicate a pattern of unpredictable emissions of toxic metals at potentially unsafe levels.”

What's more, DEQ claimed, “[T]he company’s actions have demonstrated that they are capable of burning high quantities of metals in uncontrolled furnaces that would produce emissions exceeding short-term health and safety standards.”

The agency said Bullseye was free to melt heavy metals in controlled furnaces as long as emissions don't exceed the state's 24-hour standards. DEQ asked Brown to forbid the unmitigated use of “lead, arsenic, cadmium, all chromium compounds, cobalt, manganese, nickel and selenium.” Omitted was the prior order's banning of beryllium, which makes sense, since it's basically not used in glass.

Bullseye has protested vehemently that the order forbids 80 percent of its manufacturing. Campaigns to ask Brown to rescind her order have accelerated in recent days both on social media and apparently in direct appeals to the governor.

Governor Kate Brown today directed the Oregon Department of Environmental Quality (DEQ) to extend the 10-day cease and desist order against Bullseye Glass Co. initially issued May 19. The order limits Bullseye’s use of toxic heavy metals, including lead, from its glass-making process through June 8.

“I will continue this prohibition on the use of toxic metals in uncontrolled furnaces as long as necessary to protect the well-being of children at the nearby daycare center and other residents,” Governor Brown said.

The Governor’s order to DEQ to extend the cease and desist order, conveyed to Bullseye Glass Co. today, was made in light of continued concerns by DEQ and the Oregon Health Authority (OHA) about the company’s ability to limit emissions of toxic metals into the air. DEQ provided the company a noon deadline today to sign a legally binding agreement that would have avoided the need for a cease and desist order, which the company did not sign. The agencies anticipate ongoing discussions with the company to reach a durable resolution of public health threats from the company’s operations.

In a joint DEQ-OHA memo to the Governor, the agencies requested the cease and desist extension stating that the risks previously reported and related to Bullseye's recent operations remain present. The memo further stated that a cease and desist order remains the best option for establishing the legally enforceable authority necessary to protect public health.

The initial May 19 cease and desist order was issued in response to data from a DEQ air monitor at Children’s Creative Learning Center, southeast of Bullseye, that detected high lead levels on May 9 and 10.

The agencies’ memo states, “While in public statements about this matter, Bullseye suggested that the dangerous levels of lead detected at the day care center originated from a different source…DEQ is confident Bullseye is the source of the emissions. Such claims by the company continue to indicate a lack of recognition of the impacts that its operations have to the surrounding community.”

Governor Brown’s order adds another 10 days to the order she issued May 19, which was set to expire Sunday. It directs DEQ and OHA to report to her on the need for future renewals of the DEQ cease and desist order, and also authorizes DEQ to rescind its cease and desist order if the company signs a legally binding agreement that DEQ and OHA determines will protect public health.

An interagency group, which includes DEQ and OHA, is regularly releasing air monitoring data as part of the Cleaner Air Oregon initiative to align industrial air toxics regulations with human health. More information about Cleaner Air Oregon can be found at CleanerAir.Oregon.gov.

Comments 4
Tags: News Bio Hazard
If you enjoy articles like this, please help the Mercury continue our mission of providing up-to-the-minute information, progressive journalism, and fun things to do in Portland by making a small recurring monthly contribution. Never forget: Your help is essential and very much appreciated!
CONTRIBUTE NOW