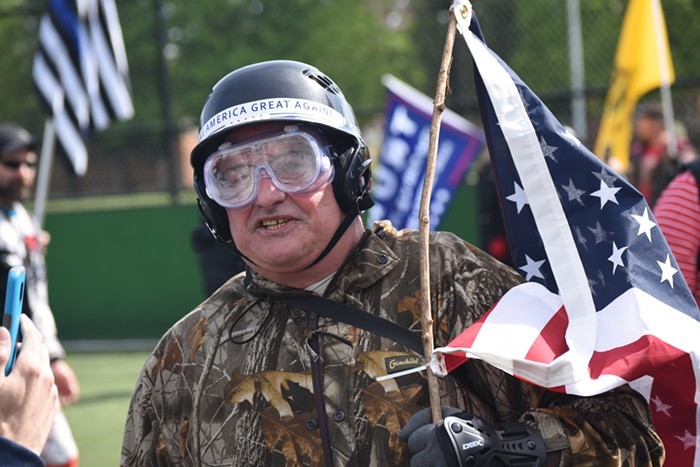 As a pair of alt-right rallies in coming weeks threaten to exacerbate the already tense atmosphere in the wake of Friday's MAX killings, Mayor Ted Wheeler is calling on the federal government to pull permits for one of the events.

In a post on Facebook this morning, Wheeler announced that the city won't be issuing permits for a "Trump Free Speech Rally" being touted by Vancouver-based right-wing activist Joey Gibson, or a planned "March Against Sharia" to be held in concert with events around the country on June 10. The most-recent such event organized by Gibson on April 29 attracted Jeremy Christian, the 35-year-old who now stands accused of brutally attacking three men who were trying to stop him from harassing two teenage girls
on a MAX train—one wearing a hijab, another Black. Christian allegedly killed two of the men, Rick Best and Taliesin Myrddin Namkai-Meche, by slashing them in the neck and severely wounded the third, Micah David-Cole Fletcher.

The problem with Wheeler's pledge: Both events are supposed to be held at downtown's Terry Schrunk Plaza, which is controlled by the federal government. So Wheeler's asking the feds to revoke permits.

"The Federal government controls permitting for Shrunk Plaza, and it is my understanding that they have issued a permit for the event on June 4th," Wheeler wrote today. "I am calling on the federal government to IMMEDIATELY REVOKE the permit(s) they have issued for the June 4th event and to not issue a permit for June 10th. Our City is in mourning, our community’s anger is real, and the timing and subject of these events can only exacerbate an already difficult situation."

Wheeler's also calling on the event organizers to voluntarily cancel their plans.

The mayor's not the only one bracing for the rallies, obviously. The group Rose City Antifa and others have announced their own Stand United Against Facism Rally in Chapman Square, adjacent to Schrunk Plaza, on June 4. It's unclear if they'll seek a permit for the event.

Update, 1:43 pm: Not surprisingly, the ACLU of Oregon is taking issue with Wheeler's efforts to kill the right-wing rallies, saying such prior restraint will cause problems.

"The government cannot revoke or deny a permit based on the viewpoint of the demonstrators. Period," the organization wrote on Twitter. "It may be tempting to shut down speech we disagree with, but once we allow the government to decide what we can say, see, or hear, or who we can gather with history shows us that the most marginalized will be disproportionately censored and punished for unpopular speech."

The mayor's office has responded that Wheeler is seeking to prevent violence, not limit speech.

1. The government cannot revoke or deny a permit based on the viewpoint of the demonstrators. Period. https://t.co/P9gcNPAumH
— ACLU of Oregon (@ACLU_OR) May 29, 2017

On Friday three men Rick Best, Taliesin Myrddin Namkai-Meche, and Micah Fletcher stood up against bigotry and hatred. Two paid with their lives. A third was seriously injured.

Our community remains in shock and mourning. But we are also tremendously grateful to our heroes and their families for their selflessness and heroism. They will serve to inspire us to be the loving, courageous people we are meant to be.

As Mayor, I wanted to update you on a few developments:

1) I have reached out to all of the victims and their families, including the two women who were terrorized and subjected to such hatred and bigotry. I have offered my unconditional assistance and support, day or night.

2) I have confirmed that the City of Portland has NOT and will not issue any permits for the alt right events scheduled on June 4th or June 10th. The Federal government controls permitting for Shrunk Plaza, and it is my understanding that they have issued a permit for the event on June 4th.

3) I am calling on the federal government to IMMEDIATELY REVOKE the permit(s) they have issued for the June 4th event and to not issue a permit for June 10th. Our City is in mourning, our community’s anger is real, and the timing and subject of these events can only exacerbate an already difficult situation.

4) I am appealing to the organizers of the alt-right demonstrations to CANCEL the events they have scheduled on June 4th and June 10th. I urge them to ask their supporters to stay away from Portland. There is never a place for bigotry or hatred in our community, and especially not now.

5) I am calling on every elected leader in Oregon, every legal agency, every level of law enforcement to stand with me in preventing another tragedy.

6) When and if the time is right for them, I would like to work with the families to find an appropriate way to permanently remember their sacrifice and honor their courage. Their heroism is now part of the legacy of this great city and I want future generations to remember what happened here, and why, so that it might serve to both eradicate hatred and inspire future generations to stand up for the right values like Rick, Taliesin, and Micah did last week.

Comments 11
Tags: News City Hall
If you enjoy articles like this, please help the Mercury continue our mission of providing up-to-the-minute information, progressive journalism, and fun things to do in Portland by making a small recurring monthly contribution. Never forget: Your help is essential and very much appreciated!
CONTRIBUTE NOW