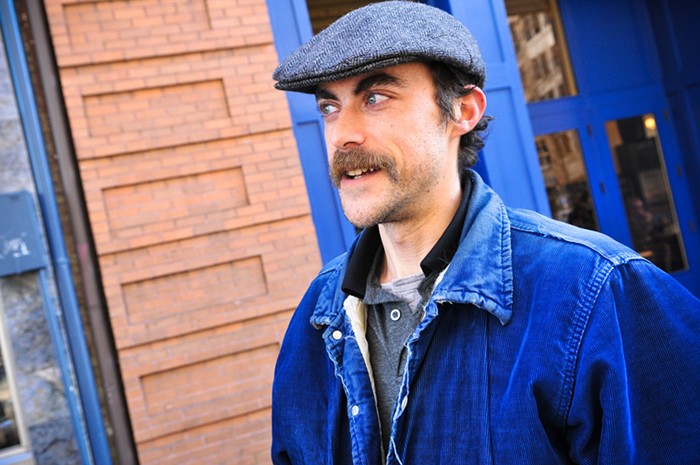 A man found dead in Colonel Summers Park on Tuesday morning appears to be a local musician and bike messenger. While police still haven't identified the person found in the Southeast Portland park around 7:43 am yesterday, friends and acquaintances online have identified him as 40-year-old Boyd Littell. (UPDATE: Police have confirmed it's Littell. See below.)

Littell was a founding member and drummer with local hip hop group ADDverse Effects (the band's website address was emblazoned in big letters on his bicycle basket). He moved to Portland from Oklahoma in 2014 with the band, which has enough of a fanbase to take "runner up" in the "best local band" and "best hip hop artist" categories of Willamette Week's reader poll this year.

Littell was also active in the city's bike scene. Last year BikePortland ran a small feature on on Littell and his bike, which said he was partly attracted to Portland "by the promise of the romantic life of a professional bike messenger." He made deliveries for Postmates and GO Box.

As word of Littell's death spread Wednesday, friends began posting outpourings of grief on his Facebook page. The cause of his death isn't clear. Portland police said in a release yesterday that both homicide detectives and investigators with the bureau's traffic division had been called to the scene.

UPDATE 1:39 pm: Police have now confirmed Littell's identity. Investigators say they don't think foul play was involved, and that Littell might have fallen from his bike. Here's the statement:

The deceased man located at Colonol Summers Park on Tuesday October 31, 2017 has been identified as 40-year-old Boyd Littell of Portland. The Oregon State Medical Examiner has determined Littell's death an accidental death, likely the result from him falling off his bicycle. Investigators do not believe foul play is involved in the death of Littell.

The Transcript, a newspaprer in Norman, Oklahoma, reports Littell's sister heard from investigators they believe Littell fell from his bicycle, cracking his skull. They think he walked across the street to Colonel Summers Park, where he bled to death.

Littell's friends have begun a campaign to crowd source enough money to have his body flown back to Oklahoma for burial and cover other expenses. It's here.