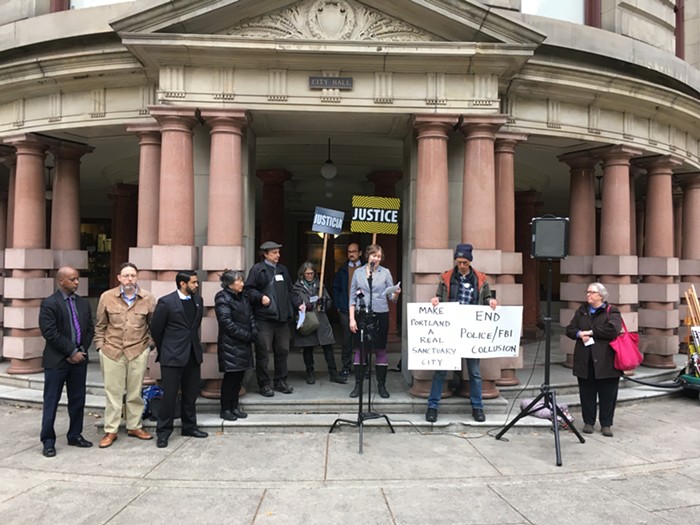 Groups including the Oregon ACLU, CAIR Oregon, and Portland Copwatch call on the city to nix JTTF involvement this morning. Dirk Vanderhart

If civil liberties advocates get their way, Portland's latest city council might be the third in a row to consider the city's involvement with federal anti-terror investigations.

In a call that's become familiar in the last 10 years, a group of organizations including the ACLU of Oregon, Portland Copwatch, the National Lawyers' Guild, and the Council on American-Islamic Relations of Oregon, launched a campaign today to convince the city to cease participation in the FBI-led Joint Terrorism Task Force.

The groups raise long-held concerns that the JTTF ropes local cops into surveillance efforts that are secretive and might be problematic. But they're also using the administration of Donald Trump—specifically, its targeting of Muslim immigrants and other communities—as leverage to try to convince Portland to wash its hands of the matter.

"President Trump has made it clear he plans to target people based on their religion (Muslims), national origin (immigrants), and political beliefs (protesters), not to mention the media and others," reads a letter signed by 24 organizations and individuals, and submitted to Portland City Council today.

Portland currently dedicates two officers to the JTTF, and has a memorandum of understanding with the federal government sealing the deal. The officers who participate in the taskforce are given security clearance higher than that of Police Chief Danielle Outlaw or Mayor Ted Wheeler, and the activities of the JTTF are closely guarded secrets.

(Former Mayor Charlie Hales applied for secret clearance, but was denied in 2014. Wheeler hasn't applied his office says, adding "the Mayor receives regular updates during briefings, particularly with regard to drug trafficking and child sex trafficking.")

But civil liberties groups have long bristled at secret activities they believe might easily cross the line. The latest campaign suggests JTTF involvement could spur local cops to break state laws, including a statute that prevents local law enforcement from surveilling groups not suspected of crimes, anti-profiling legislation, and Oregon's 30-year-old sanctuary law.

"Because it operates under a veil of secrecy with very little oversight, the true extent of rights violations committed by the JTTF is unclear," Kimberly McCullough, policy director for the ACLU of Oregon, said in a prepared statement. "This lack of transparency also makes it very difficult to know how and when rights violations involve Portland Police Bureau officers."

The city has a rollercoaster relationship with the JTTF. In 2005, under the leadership of then-Mayor Tom Potter, the city severed ties with the taskforce, partly amid civil liberties concerns (Commissioner Dan Saltzman was the lone vote against that move).

Then in November 2010, the FBI announced a young Muslim man had tried to blow up Portland's Christmas tree lighting ceremony (after having his hand held by the FBI throughout the "plot"). Immediately afterward, Saltzman began agitating for Portland to re-join the JTTF, and in April 2011 the city voted to partially reunite with the group.

In 2015, on the heels of terror attacks in cities around the globe, City Council voted to fully re-join the JTTF. It was a 3-2 decision, in which Hales cast the decisive vote (current commissioners Fish and Saltzman joined him in support, current Commissioner Amanda Fritz voted against along with former Commissioner Steve Novick).

Portland's not the only city that's had heartburn about the JTTF. Earlier this year, San Francisco police pulled out the their local task force, spurring dire warnings from federal officials in the process.

There's not yet any indication the current council, which includes a new mayor in Wheeler and a new commissioner, Chloe Eudaly, wants to take up the debate again. The groups launching the latest campaign said today they hadn't asked current councilmembers about the matter.

Among supporters for severing JTTF ties is Brandon Mayfield, a local attorney who was improperly surveilled and imprisoned by the FBI in 2004. He said today that with the JTTF, the federal government is asking local officers to participate in a "witch hunt."

"No human being is illegal," Husseini said this morning, "however if you're an american Muslim you might feel like you are."