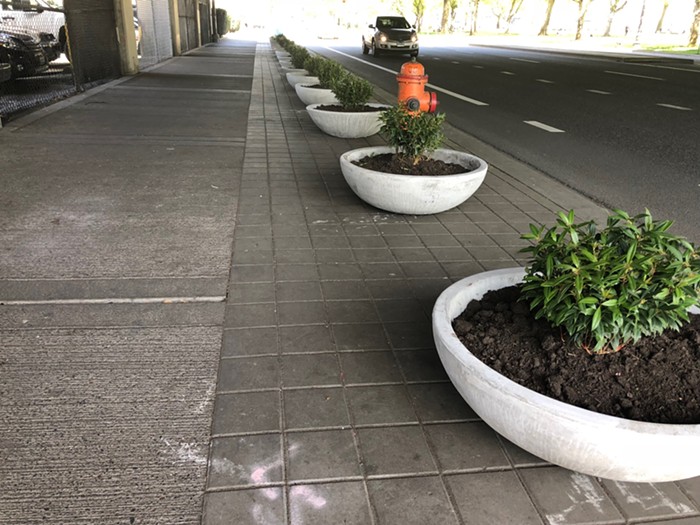 They appeared at the end of March: Around 20 round cement planters, about two feet in diameter and perhaps a foot off the ground, placed in a row along a two-block stretch of sidewalk the west side of SW Naito Parkway. This wouldn't have caught our attention if it weren't for their placement—directly under the Morrison Bridge, where there's absolutely zero sunlight. Not the ideal spot for the tiny shrubs stuck in the planters to thrive.

It is, however, a regular spot for homeless Portlanders to set up a tent or take a nap, and for understandable reasons: It's on a strip of SW Natio without much foot traffic, protected from the rain, and walking distance to Old Town's homeless services.

Since the planters were installed, the number of campers under the bridge has plummeted. We're assuming that this is exactly what their installers had in mind: a quiet, harmless-looking attempt to boot homeless residents out of sight.

But we can't be sure. That's because no one knows where the planters came from. 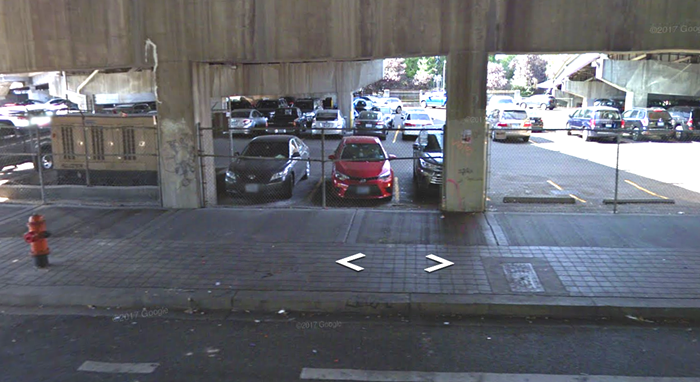 Here's the spot we're talking about, circa 2017. Google Maps

"This has been a little bit of mystery to us, frankly," says Dylan Rivera, spokesperson for Portland Bureau of Transportation (PBOT).

PBOT is the main agency that issues permits to businesses or other agencies wanting to encroach on the public right-of-ways—but Rivera found no permit linked to the sidewalk. And, a few weeks of investigating, Rivera confirmed that neither the city nor county has had anything to do with these planters. The Portland Business Alliance also had no involvement.

The only guess is that the adjacent property owners, City Center Parking, a company that runs dozens of parking lots across Portland, plopped the cement planters down sans permit. Which, according to Rivera, is entirely legal. PBOT only investigates these encroachments if someone files a complaint.

Management with City Center Parking did not return either of the Mercury's calls to confirm this hunch. Either way, the quiet arrival of these mundane planters represent another, less headline-catching way that private businesses enforce their own "no-sit" rules for Portland's homeless.