A Black, Queer, Homeless Portlander Was Found Hanging from a Tree. Police Say It's Suicide. Her Family Disagrees. 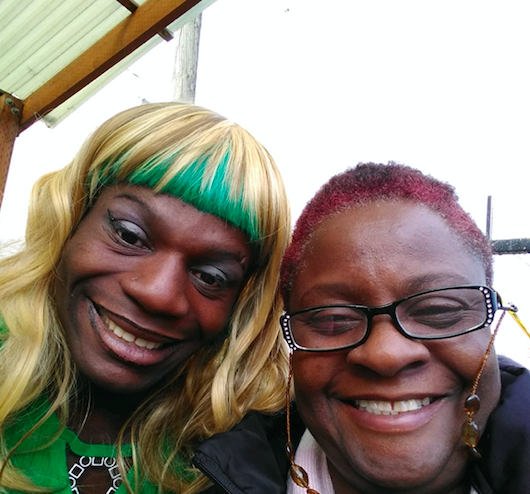 Titi Gulley, left, with her mother Kenya Robinson. PHOTO COURTESY KENYA ROBINSON
(Editor's note on gender and pronoun usage: From speaking with Gulley’s family, we’ve learned that Gulley’s gender expression was fluid. Her family knew her as a cisgender gay man named Otis who sometimes dressed in drag, and they are quoted in this story using he/him pronouns. But among friends, Gulley typically presented as a woman, used she/her pronouns, and went by the name Titi. Because Gulley is now deceased, we can’t ask her which pronouns we should use, but we have decided to use she/her because that is how she usually presented publicly.)

On the afternoon of May 27, police officers found the body of a Black, queer, homeless person hanging from a tree in Rocky Butte Park.

According to the Portland Police Bureau (PPB), the death of Otis/Titi Gulley, 31, has been ruled a suicide. Her family, however, isn't as quick to settle on this conclusion.

Weeks after her death, Gulley's family is still struggling to find answers about the mysterious circumstances surrounding the end of her life. Since the night of Gulley's death, they have found the PPB to be unreceptive to their concerns. Kenya Robinson, Gulley’s mother, told the Mercury she believes some of this indifference has to do with Gulley's identity.

“You didn’t ask any questions,” said Robinson, referring to the PPB. “You saw a Black man in a tree who was in a homeless camp, and you wrote him off as being a transient homeless, and wrote it off as a suicide.”

Gulley had been homeless for most of her adult life, and also struggled with mental illness that Robinson said was caused by a difficult birthing process. Gulley was in regular contact with her mother and three siblings, and had been working with the homeless services nonprofit JOIN to try to find housing shortly before she died. Robinson said she had many friends in Portland’s homeless community, and was known by friends and family as a cheerful, helpful, and loving person.

“He was always wanting to help,” Robinson said. “‘Want me to cook? Want me to do your nails, do your hair, do something for you? Take the trash out?’ That’s just him.”

Though Gulley faced challenges in life, her family said that as far as they knew, she never mentioned suicide or attempted to harm herself. In fact, the family initially hoped the case was an instance of mistaken identity, and that Gulley was not actually the person found hanging in Rocky Butte Park.

They weren’t permitted to view Gulley’s body and confirm it was hers until a week after she died.

“I didn’t even know it was my son at the morgue until we went to go view his body at the funeral home,” Robinson said.

Robinson told the Mercury that initially, PPB did not plan to have an autopsy performed on Gulley’s body, but that they changed course after she requested one. She was told the autopsy concluded it had been a suicide, but she was not given any paperwork from the medical examiner’s office or the police about it.

PPB did not respond to several questions from the Mercury about these details, but did confirm that Gulley's death has been ruled a suicide by the Multnomah County Medical Examiner.

Gulley's friends do not believe she died from suicide. In the weeks following her death, many of them contacted her family, claiming that Gulley had been murdered, and was then hung from a tree to make it look like a suicide. They said there were other homeless people had witnessed it, and that someone had a video.

The Mercury has not independently confirmed any of these rumors. But every time Gulley’s family has attempted to inform PPB about what they have been hearing, they say they have been met with either bureaucratic confusion or cold indifference.

One example: Robinson was given the name of a PPB East Precinct officer who was supposed to be handling the case; when she called him to report the rumors, he said he was not actually assigned to the case. So she contacted PPB again to find out who was on the case, and again was given the same officer’s name.

When she did get through to an officer and gave him the alleged suspect’s name, they pushed back, telling her it had already been ruled a suicide and casting doubt on the rumors.

Gulley’s brother, Richard Bryant, used to be a police cadet. He said he isn’t surprised by PPB’s response.

“You know they treat a lot of homeless people like they don’t mean nothing to this earth, right?” Bryant said. “So in the homeless community, other people are willing to do hurt to more people, because they know their voices won’t be heard. They’re just homeless.”

Physical aspects of Gulley’s death also strike her family as suspicious. After PPB returned Gulley's belongings to her family, her sister Crystal noticed that Gulley's clothing was muddy. She said it wasn’t like her sibling to go out in dirty clothing—especially on the day she died.

“He was with some women [earlier that day] taking pictures,” Crystal said. "They’d just gotten their faces done. … Everybody that knows my brother knows that if he puts makeup on, he’s trying to be seen.”

PPB has yet to respond to the Mercury's public records request for a copy of the police report made about Gulley's death.

Gulley's family has created a a GoFundMe fundraiser to help pay for Gulley’s funeral costs.

It’s unclear what the next step is for Gulley’s family. But Robinson knows one thing for sure: “I’m not going to let him die in vain.”