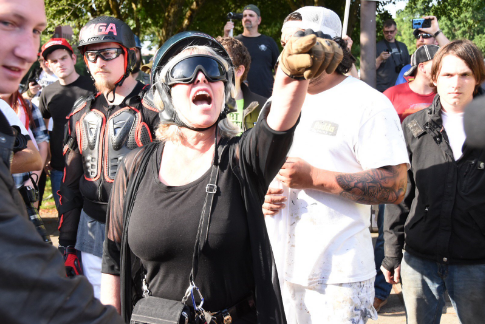 A scene from a 2017 Patriot Prayer rally. Doug Brown

The Portland Police Bureau (PPB) has made its first arrest following the May 1 street brawl that took place outside of Portland bar Cider Riot.

As first reported by Willamette Week, right-wing protester Ian Kramer was arrested this afternoon on six charges—second-degree assault, attempted second-degree assault, two counts of unlawfully using a weapon, disorderly conduct, and unlawful use of mace—related to his involvement in the May Day clash. A Mulntomah County grand jury has accused Kramer of using a baton to beat a 31-year-old woman unconscious, along with other misconduct. Kramer's bail is set at $250,000.

Kramer, 45, regularly attended events put on by Patriot Prayer, the right-wing extremist group based in Vancouver, Washington who organized the May 1 clash. Patriot Prayer visited Cider Riot after learning that members of Portland's anti-fascist (antifa) faction were meeting there to celebrate a day of peaceful May Day rallies. After yelling insults at Cider Riot patrons from the adjacent sidewalk, Patriot Prayer members allegedly sprayed mace at members of antifa, prompting some of the left-wing activists to leave the bar and engage in a street fight.

A lawsuit filed by Cider Riot against Patriot Prayer accuses Kramer of hitting a woman with a baton so forcefully that she was knocked unconscious—and suffered a vertebrae fracture.

Kramer is one of five Patriot Prayer members named as defendants in the May 6 lawsuit. Another is Matthew Cooper, a 24-year-old man who is also named in Kramer's indictment. The same grand jury accused Cooper of harassing the same woman allegedly assaulted by Kramer and "unlawfully and recklessly created a risk of public inconvenience, annoyance and alarm" by engaging in the street fight. The Cider Riot lawsuit also claims Cooper "battered" Cider Riot patrons.

Cooper has not yet been arrested by the PPB. When arrested, his bail will be set at $3,000. Kramer will be arraigned tomorrow at 9:45 am at the Multnomah County Justice Center.

PPB was criticized for its delayed response to the May 1 clash—officers didn't arrive on the scene for over an hour. In a press release announcing Kramer's arrest, Police Chief Danielle Outlaw subtly responded to this critique.

"Criminal violence is not tolerated in the City of Portland and our investigators have worked diligently on this case," said Outlaw. "While these cases can take time, and delays in arrest can be perceived as indifference or lack of care, the opposite is true."