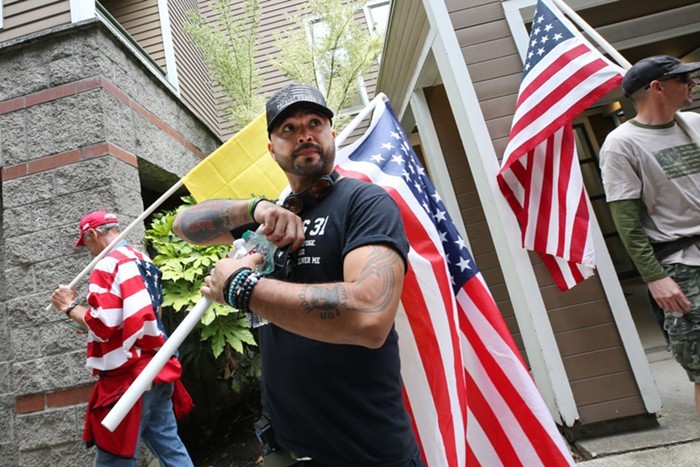 Joey Gibson at a August 17 rally in downtown Portland. KAREN DUCEY / GETTY IMAGES
A Multnomah County judge has denied a request by Joey Gibson, the leader of far-right Vancouver group Patriot Prayer, to throw out a $1 million civil lawsuit against him.

Gibson was sued by Portland pub Cider Riot on May 3, two days after Patriot Prayer members harassed and swung punches at anti-fascist activists who were patronizing the NE Couch establishment. The lawsuit accuses Gibson, Patriot Prayer, LLC, and five other men affiliated with Patriot Prayer of negligence, trespass, intentional infliction of emotional distress, and interference with economic relations. Cider Riot’s lawyers accuse Gibson of coordinating and sanctioning the violent May Day brawl.

In July, Gibson’s lawyer James Buchal (who also serves as the chairperson of the Multnomah County GOP) filed a legal motion claiming his client was the target of a Strategic Lawsuit Against Public Participation (SLAPP), a name for litigation that appears specifically crafted to intimidate and silence critics. Buchal is also representing Patriot Prayer, LLC, in the proceedings. In his anti-SLAPP motion, Buchal argues that Gibson was simply using his First Amendment rights to eradicate anti-fascists and to protest businesses that support them.

“Mr. Gibson’s not perfect, but he’s concerned about the future of the country,” said Buchal at an October 25 hearing, where he defended the motion. “That’s all he was expressing.”

Circuit Court Judge Andrew Lavin thinks that judgement call should be left to a jury.

In a Friday afternoon ruling, Lavin rejected Gibson’s motion, stating that Cider Riot’s lawyers have provided evidence proving that the actions that occurred on May 1 went beyond free speech.

“Would a reasonable [person] conclude that certain individuals outside Cider Riot on May 1st engaged in conduct that went beyond constitutionally protected speech or demonstration, and therefore became tortious and/or criminal?” Lavin asked. “The answer to that is yes.”

Yet Lavin didn’t explicitly accuse Gibson or Patriot Prayer as an organization for encouraging these potentially criminal acts.

“Could a reasonable [person] conclude… that Joey Gibson and Patriot Prayer are liable for the tortious and/or criminal conduct of individuals outside of Cider Riot on May 1st because Gibson and Patriot Prayer ratified, coordinated, or directed that conduct?” Lavin said. “I found that to be a difficult question to answer. If there’s any direct evidence of that, it is scant at best.”

Lavin also dismissed the assumption that Gibson himself was involved in illegal physical conduct.

His comments set the stage for what’s expected to be a tumultuous trial (that is, unless Gibson and his fellow defendants choose to settle first).

“No single piece of video... tells the whole story of what happened outside of Cider Riot on May 1,” said Lavin, referring to the copious video clips taken during the May Day melee. “And taken together, the evidence as a whole paints a picture that is somewhat ambiguous in certain ways, and subject to multiple interpretations, each of which is arguably reasonable.”

“What the community saw from Mr. Gibson and his crew on May 1st went beyond the right to freedom of speech," Chavez said. "That right does not allow anyone to engage in conduct that results in harassment, violence, or menacing without consequence.”

In September, Lavin rejected another motion filed by Buchal requesting the case be moved outside of Multnomah County.

The trial date for this case yet to be scheduled. Gibson and several others named in the civil lawsuit are also facing felony charges for inciting a riot on May 1. That case returns to the courtroom on February 28.