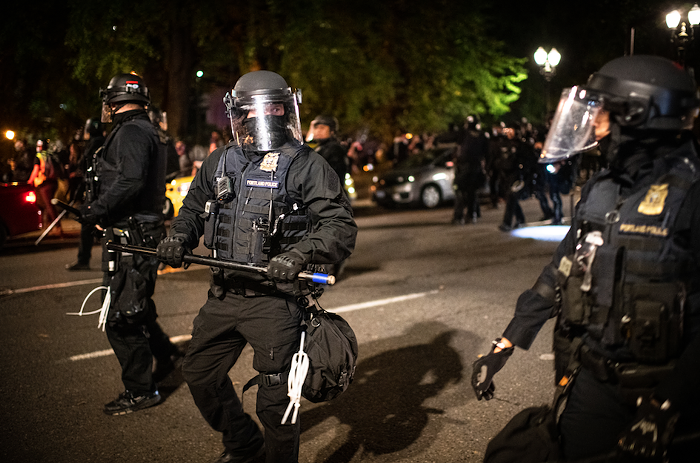 A federal judge ruled Monday that the City of Portland had violated a court order barring Portland police from shooting impact munitions at nonviolent protesters.

In his evening ruling, US District Judge Marco Hernandez wrote that the city—by way of the Portland Police Bureau (PPB)—defied the June 26 temporary restraining order at least three times during a June 30 demonstration. This violation places the city in contempt of court—a finding with undetermined consequences. Hernandez wrote that the penalty for violating the restraining order will be determined at a later date.

"Don’t Shoot Portland and the other plaintiffs filed this lawsuit because they knew that we were in a moment of change, where real justice for the Black lives lost could be had, and the Portland Police Bureau wasn’t going to go quiet," wrote Juan Chavez, a lawyer representing Don't Shoot Portland, in a message to the Mercury Tuesday morning. "This judgment shows that, despite being ordered by a federal judge to just follow the Constitution, PPB could not even keep to that standard when one night of their activities were examined."

During an October hearing before Hernandez, Chavez and other members of Don't Shoot Portland's legal team chose to focus on one night of protest to illustrate PPB's defiance of the restraining order: June 30.

"June 30 provided a pretty good representative sample of what violations had been going on since June 26," said Franz Bruggemeier, another attorney representing Don't Shoot Portland, at the time.

That evening, protesters had met in North Portland's Peninsula Park and marched to the North Lombard headquarters of the Portland Police Association (PPA), PPB's rank-and-file police union, where they were met by a wall of riot police. The night devolved into violence after individuals in the crowd threw several water bottles and rocks at the armored officers.

Lawyers for Don't Shoot Portland accused PPB officers of violated the court order at least nine times June 30. Hernandez, however, only believes three of those incidents actually violated the order: One, in which an officer shot five so-called "less lethal" bullets at the legs of someone who refused to drop a handmade banner; another, where an officer shot ten less lethal rounds at people trying to help a person on roller skates who fell down; and a third, in which an officer shot an impact munition at a demonstrator who stooped down to pick something up.

The June court order only allows officers to use munitions if they encounter "a threat or an overt act of assault" that could create "a risk of injury to officers or others without intervention." Hernandez writes that in all three interactions above, none of the protesters fit this description. In fact, Hernandez notes, in at least one instance, protesters were following PPB's orders when they were shot at.

One PPB officer was responsible for two of the three violations: Officer Brent Taylor. Taylor was responsible for shooting the demonstrator carrying a banner (he apparently thought the banner could be used as a weapon) and the people helping the roller skater up from the ground (Taylor said he incorrectly believed the roller skater was under arrest at the time). Taylor is a familiar name for Portland demonstrators—his heavy-handed actions against protesters at racial justice events have been widely documented on Twitter.

The officer responsible for the third incident was unable to be identified in the video footage from that evening.

Hernandez wrote that the six other instances that Don't Shoot Portland lawyers said violated the court order all involved individuals who could reasonably be seen as a threat by officers at the time. That includes an incident when a protester inadvertently grabbed an officer's baton while falling to the ground, and when another demonstrator kicked a smoke canister back towards the PPB officer who shot it into the crowd.

During the October hearing, lawyers representing Portland argued that the violations were just a few technical errors, and that PPB took "all meaningful steps to comply" with the restraining order. Hernandez rejected these excuses in his Monday ruling.

"None of the individuals targeted by police in these incidents were engaged in active aggression, and the use of force did not reasonably prevent the use of a higher level of force," he wrote. "All three individuals appear to have been struck by police munitions. The Court cannot conclude that these three violations over an hour-long period were 'merely technical.'"

Hernandez added that PPB didn't do enough to adequately inform its officers about the restraining order's limitations.

Chavez said Hernandez's decision bodes well for the future of the Don't Shoot Portland lawsuit, especially because the actions that took place June 30 are just a fraction of his team's evidence.

"That one night happened a little over a month after the murder of George Floyd," Chavez writes. "We’ve had many more nights since then. When we try this case before a jury, we’re going to find these violations on nearly any night we examine."

It's not clear when, or if, Hernandez will announce sanctions against the city for its June 30 violations. Chavez said he expects the court to tell PPB to change its ways.

But, he adds: "Since we know they either can’t or won’t change, weapons needs to be taken away, people need to be benched, compensation must be given, and apologies should be given."