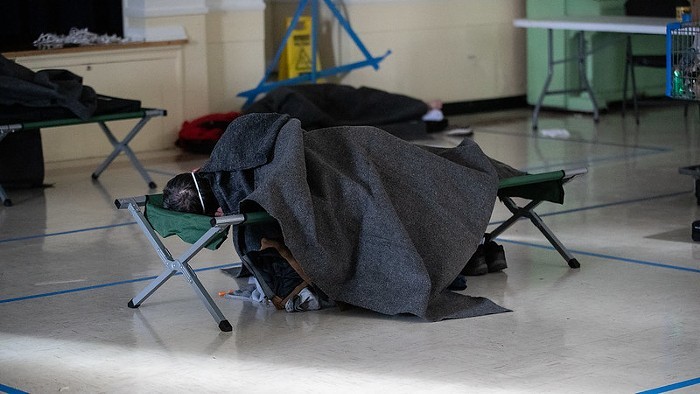 Due to frigid temps, warming shelters will remain open for another night. MOTOYA NAKAMURA / MULTNOMAH COUNTY

GOOD AFTERNOON, PORTLAND! First things first: TOMORROW IS HUMP DAY! (Not "Wednesday," but rather the debut of the super sexy HUMP! Film Festival! So get those tickets now!) Okay... LET'S DO SOME NEWS.

• Alert! It's supposed to get VERY COLD again tonight (with temps dangerously dropping to the mid-20s) so the county will be reopening five severe weather shelters for an additional night. Find out how to get to 'em with this report from our Isabella Garcia!

PLEASE SHARE: @multco, @PortlandGov, @multco_johs and their service provider partners, will open severe winter weather shelters for a second consecutive night Wednesday, Feb. 23, 2022, from 8 p.m. to 10 a.m. No one will be turned away. READ MORE: https://t.co/Vcp5zLUp3d

• Ben Smith, the Portland man accused of a brutal mass shooting this past weekend at Normdale Park has been formally charged with murder in the second degree, along with eight other charges. Our Alex Zielinski has the latest.

• Related: In a press conference yesterday, Mayor Ted Wheeler stuck by his controversial statements from last April in which he asked Portlanders to "make a stand and take our city back" from protesters, adding that citizens should "hurt them a little bit." Yesterday he claimed those statements were taken out of context (were they, tho?) and he was not advocating vigilantism, adding “If I regret anything it’s that I used a statement that could be used out of context for political gain.” Yeeaaahhh... or maybe one should take responsibility for what one says?

When The Sports Bra opens in Portland in April, it might be the only women’s sports bar in the world https://t.co/qGsnPNxt2L
— Hillary Borrud (@hborrud) February 23, 2022

• Legislation designed to prevent Oregonians from being evicted during the pandemic is set to expire by the end of this month, which could lead to a rash of renters being kicked out. Renters are still being encouraged to apply for the Oregon Emergency Rental Assistance Program—but officials are unsure when funds for that will run out as well.

• Guys, the new Hinterland bar and food cart pod between Hawthorne and Division looks AH-MAZE-BALLS. And our Janey Wong not only reviews it, she's offering up her picks for what to eat and drink at each place! All hail Janey Wong!

• Russia certainly appears to be laying the groundwork for a full-out invasion of Ukraine, as 80 percent (!) of their troops are ready and in position to move in. Also, Putin is trying to sell the line that Ukraine's separatist regions are begging for Russia's help in "repelling [Ukraine's] aggression." Meanwhile, America and its European allies are laying on the sanctions, in particular targeting Putin's mega-wealthy inner circle. And surprise! The GOP have come to the idiotic conclusion that Putin's march into Ukraine is all Biden's fault.

This American convoy is emulating the protest in Canada, protesting vaccine mandates and Covid restrictions.

• Ummmm... this is troubling: Two New York prosecutors heading up the criminal probe into Donald Trump's shady business practices have abruptly resigned—reportedly because their new boss, who has replaced Cyrus Vance, is "less interested" in the case than his predecessor.

• According to reports, hellspawn Ivanka Trump is in talks with the January 6 commission to voluntarily cooperate and testify about what her dad was doing that fateful day.

No court anywhere in the country has ever found that gender-affirming care can be considered child abuse. https://t.co/D8F7rfELdV

• And... waitasecond... we've all been pronouncing Lindsay Lohan's name wrong? Like, FOR YEARS??