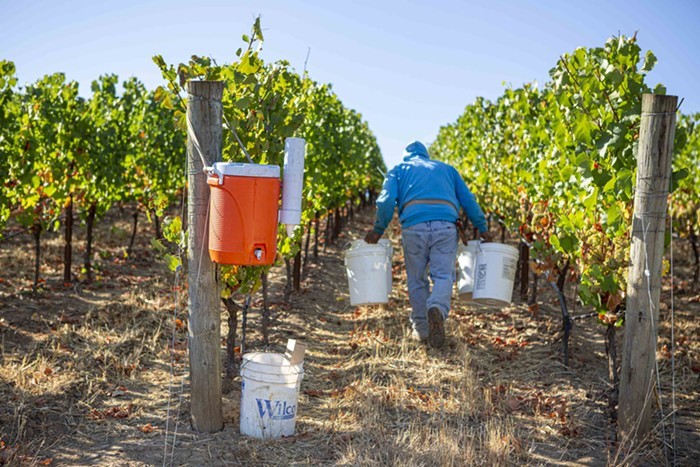 Good morning, Portland! Last week's frigid weather is behind us, but it's opened the door to some wet weather. We're looking at rain nearly every day this week with temperatures in the mid-50s.

- Local civil rights organizations met Friday morning to decry city leadership's response to the mass shooting on February 19, which targeted Black Lives Matter and anti-fascist activists. Those involved called for an investigation into the city’s communications system and for Mayor Ted Wheeler to resign, among other requests.

- The Oregon Department of Justice announced Friday that it doesn't have enough evidence to bring criminal charges against Portland Police Bureau Detective Erik Kammerer, one of the notorious officers known for his violence against protesters. WW explains why.

- The latest in leaked PPB internal affairs investigations: A PPB sergeant sent a mass email to officers in the bureau’s Central Precinct asking them to sign up for an overtime shift with a graphic of a red cap with white block letters that read “Make Central Great Again!” Is this illegal? No. Is this Trump-y and gross? Yes.

- One of the most divisive bills introduced in the Oregon Legislature’s short session is moving forward. The bill, which would give farmworkers overtime pay—an idea that has split lawmakers along party lines—advanced out of committee and to the House floor last week.

Terrific+insightful Monday AM long-read right here from @Rjaellis. Will PDX follow Austin/Sacramento w/ a ballot measure to ban camping unless there is significant action from electeds soon?https://t.co/2e5rk1q6sV

- A posse of one hundred or so conservative Americans with vehicles—hoping to replicate the Canadian trucker convoy—are mad that the war in Ukraine has taken the spotlight off their road trip to Washington, DC to protest COVID-19 vaccine requirements. Naturally, some of those on the convoy believe the war is a conspiracy to distract from their heroic cause.

- Ukraine is still in control of all of its country’s major cities, despite a mounting attack from Russian troops. At least 350 Ukrainians have been killed since Russia’s attack on its neighbor began. Meanwhile, adult men under 60 have been banned from leaving the country after President Volodymyr Zelensky instituted a mandatory military conscription.

- The story sounds a lot cheerier in Russia headlines. Russia’s state-owned media hasn’t mentioned the deadly assaults and instead painted their soldiers as heroes that are liberating Ukrainians. It’s a mind-boggling pivot—and important for outsiders to understand.

- Russia's not the only country engaging in bad journalism. Press outlets from across the globe have repeatedly framed the crisis in Ukraine as uniquely important because it's happening to people with white skin. Here's one example:

If only human beings recognized all human beings as “like us.” If only racist ideas did not transform peoples of color into “remote” populations. If only “anyone” included everyone. https://t.co/yxGlWkDv8B

- A study from the Intergovernmental Panel on Climate Change finds that more than 40 percent of the world's humans and animals are no longer able to adapt to the effects of climate change. *Insert "This is fine* dog here.