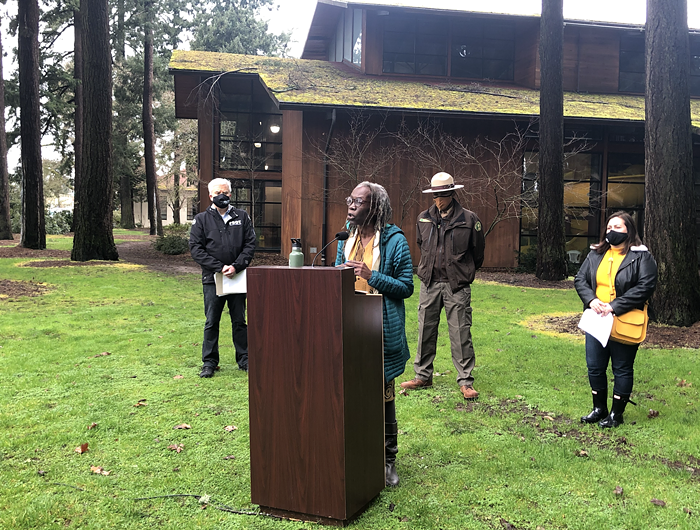 Commissioner Hardesty speaking at a Tuesday press conference in Mt. Scott Park. Alex Zielinski
Many Portlanders were skeptical in October 2021 to learn of Portland City Council's proposal to quell gun violence in Southeast Portland's Mt. Scott-Arleta neighborhood with the use of plastic traffic barrels meant to slow traffic. Yet, three months of crime data and anecdotal evidence collected after the program began shows tentative success in the doubted plan.

According to data collected by the Portland Police Bureau (PPB), the number of verified shootings in the neighborhood dropped by 64 percent in the first three months of the pilot program—from October through December—as compared to the previous three months.

This change comes after City Commissioner Jo Ann Hardesty, who oversees Portland Bureau of Transportation (PBOT), directed the bureau to place 18 cylindrical plastic traffic barrels affixed with "Local Access Only" signs at intersections of residential streets in the six-block radius surrounding SE 72 and SE Woodstock. The idea was initially brought to the city by the Mt. Scott-Arleta Neighborhood Association in September 2021, after the neighborhood experienced a surge in gun violence—a trend that paired with a rise in vehicles speeding dangerously down residential streets to flee a crime scene.

Neighborhood association chair Matchu Williams recalls strings of nightly shootings where his neighbors would check in on each other over group text messages.

"We were in a really tough place last summer," Williams said Tuesday. "It was honestly terrifying. We knew we needed something more—not just reactionary. We needed a way to prevent it."

The neighborhood association suggested the city experiment with traffic calming measures, like barrels, and improved lighting along sidewalks and in Mt. Scott Park.

At a news conference Tuesday, Hardesty said that the work was the result of a number of factors.

"We knew that the simple act of installing traffic barriers alone was not going to make a significant impact on gun violence," Hardesty said.

Along with adding barrels to intersections and improving lighting in the neighborhood, the city had Portland Parks & Recreation boost the number and frequency of park rangers patrolling Mt. Scott Park to keep an eye on safety concerns. City Commissioner Carmen Rubio, who oversees the city's parks department, said that rangers' work has helped de-escalate issues that could have necessitated a 911 response.

Williams said that the impact of the pilot program has delivered a "day and night" difference in his neighborhood.

"Last summer, we were hearing gunfire five nights in a row," said Williams. "After the barrels went up, it was one every five weeks."

There are numerous reasons that could have contributed to a drop in gun violence in the Mt. Scott-Arleta neighborhood during the city's pilot program. For one, Portland historically sees higher rates of gun violence during the summer months, and it's normal to see those number drop later in the year.

Then there's the role that the Portland Police Bureau (PPB) played in the neighborhood. According to the PPB, officers conducted "targeted missions" in the Mt. Scott-Arleta neighborhood starting in late September 2021 until early January 2022.

"These missions resulted in providing additional information regarding numerous shooting investigations and even the recovery of weapons used in previous shootings," said PPB spokesperson Nathan Sheppard in a statement emailed to the Mercury.

Sheppard said that it was these police efforts that led to a 76 percent decrease in shootings in the area surrounding Mt. Scott Park.

Hardesty didn't discount PPB's impact on gun violence rates in the neighborhood. On Tuesday, she warned that it was too soon to declare the pilot program a success, and said she'll be urging City Council to expand the pilot's timeframe in order to collect more data on its impact.

"I know people are scared," Hardesty said. "The amount of gun violence we have witnessed is unacceptable. From the data I've seen, I want to continue this pilot in Mt. Scott and beyond."

PBOT has requested $500,000 in the coming year's budget to expand the Mt. Scott program. Portland Parks and Recreation has requested to increase the number of park rangers from 30 to 49 to continue foot patrols in Mt. Scott and other parks.