OHSU workers rallied outside the Richmond Clinic Wednesday. Isabella Garcia
Employees at Oregon Health and Science University’s (OHSU) Richmond Clinic allege that the clinic’s management has created a discriminatory and racist work environment, despite management pledging to address these issues more than a year ago. During a rally Wednesday held outside the SE Division and SE César Chávez clinic, employees demanded OHSU hire an outside consultant to rebuild the culture.

“We are the cavalry, nobody is coming to save us,” said Anthony Mosley, a Richmond Clinic employee, at the rally. “If we want change we are responsible for that change and I believe it is starting right now.”

A March 2021 report from an outside consultant found that the Richmond Clinic’s environment is “unhealthy, unpredictable and toxic,” according to a summary of the report shared with clinic staff. While the report was developed from interviews with clinic staff, the final report was only shared with Richmond Clinic and OHSU management. Clinic staff were provided a written summary of the report in October 2021, seven months after management received the detailed findings. Issues of racial discrimination in the Richmond Clinic’s were later echoed in a larger investigation into OHSU’s workplace culture. The university-wide report, commissioned by OHSU and published in December 2021, found that OHSU did not have clear diversity and equity priorities and had a pattern of inadequately addressing misconduct complaints.

In response to the findings, OHSU required unconscious bias training for staff and created the “Richmond Culture Committee”—a committee of existing Richmond management staff tasked with leading a culture shift at the clinic. Clinic staff said the committee has been largely ineffective because the same people who created the discriminatory workplace culture, as identified by the report, are being asked to champion a new culture.

“How can we expect that there will be meaningful change if the folks that are tasked with making the change are the ones that created the unhealthy, unpredictable, and toxic work environment?” said Lia, a Richmond employee who asked to be identified by her first name, at the rally.

Mosley, who is Black, said he has been outspoken about racial discrimination within the clinic and believes he has been targeted because of it.

For example, Mosley was called in for a meeting about his participation in the 2021 culture report with two of the clinic’s managers. Mosley said he was told that his participation was anonymous, but later discovered that his name had been shared to management along with other participants. Mosley said that staff members who provided feedback in the report were called in for meetings one at a time with multiple managers which made it feel like an interrogation.

Additionally, in a recent clinic meeting about racial discrimination held over Zoom by the Richmond Culture Committee, Mosley made a comment about how it is unfair that managers who have been racially discriminatory are allowed to keep their positions and be considered leaders for changing the workplace culture. According to Mosley, music suddenly started playing while he was talking, drowning him out.

“The meeting was quiet the whole time and then the only time music was playing was when I started talking,” Mosley said in an interview with the Mercury. “It could have been an accident, but I don’t believe in coincidences.”

Richmond leadership sent out an email apologizing for the disruption, according to Mosley. An OHSU representative declined to comment on the incident in an email to the Mercury. 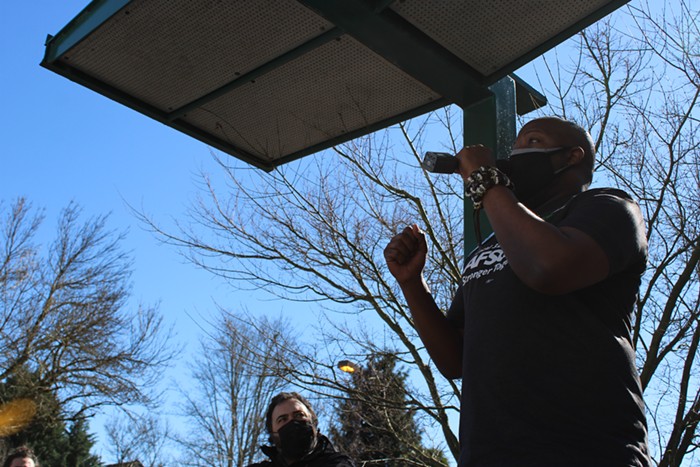 Anthony Mosley, a Richmond Clinic employee, speaking at Wednesday's rally. Isabella Garcia
For every outspoken staff member, Mosley says there are several more who are struggling quietly. Mosley estimates he has talked to nearly a dozen staff members of color about racial discrimination they’ve received and tried to help them through the stress of a toxic work environment while also being subject to it himself.

Israel, a Filipino and Latino pharmacist at the Richmond Clinic, is one of the clinic staff who looked to Mosley for advice. Israel is a pseudonym for an employee who asked to not be identified by his real name for privacy and future career concerns.

According to Israel, employees of color are held to higher expectations than their white counterparts. For example, Israel remembers when a white coworker upset a patient while helping them. According to Israel, the white coworker was laughing at the patient as they got more frustrated, so he stepped in to help and eventually brought over a manager at the request of the patient. After the incident, Israel said he was asked to take eight hours of de-escalation training while the white coworker was not.

“A lot of the time our performance will be judged a lot more harshly than employees that are not employees of color,” Israel said. “No employer is perfect and sometimes you are going to be in a difficult situation as a person of color, but this experience I’ve had at OHSU has been beyond anything I’ve ever experienced in over 10 years of being in healthcare.”

Israel is currently on a mental health leave from the clinic due to stress he attributes to discrimination he faced at Richmond and is considering other job offers.

In January, a photo of two white clinic managers posing in a culturally appropriative way and “acting Black,” according to some employees, was sent to staff as a way to promote OHSU-branded beanies. Several employees reported the email to human resources and the people in the photo later apologized. A recent email sent to Richmond staff by OHSU’s human resources department acknowledged the photo, saying that the “appropriate processes, trainings and conversations are happening” so that “further missteps are avoided.” 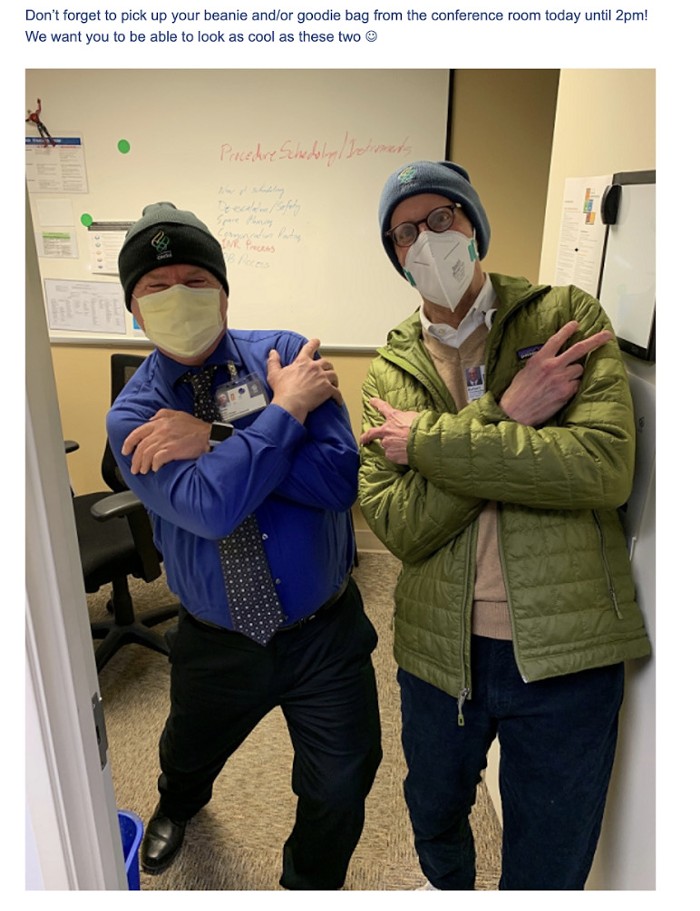 A photo of Richmond Management reported for being culturally appropriative. Courtesy of Richmond Clinic staff
“Although progress has been made, this work is ongoing,” the email read. “True cultural change and building back trust is difficult and takes time.”

At a rally outside of the clinic Wednesday, Richmond staff listed nine demands they have for the clinic, including hiring a worker-approved third party to lead the staff in anti-racist work, reforming the Richmond Culture Committee to be 60 percent non-management employees, and outlining a specific plan to address all of the issues laid out in the 2021 report. The demands were sent to Richmond and OHSU leadership after the rally.

An OHSU representative did not answer the Mercury’s inquiry about whether they would consider hiring a third party to address the clinic’s workplace culture issues.

“There is a reason that we work at Richmond,” Lia said in an interview with the Mercury. “We love what we do, we care deeply about the patients that we support and that’s what keeps us coming in everyday. Folks continue to be subjected to this because of how much they care and it feels like that is taken advantage of.”

Despite the discomfort of the workplace environment, Mosley has no plans to leave either.

“I grew up in this neighborhood,” Mosley said. “The people who [attend the clinic], I know them. I know their brothers and their sisters and their dog’s name… If I run away, then I’m just leaving the people I care about.”