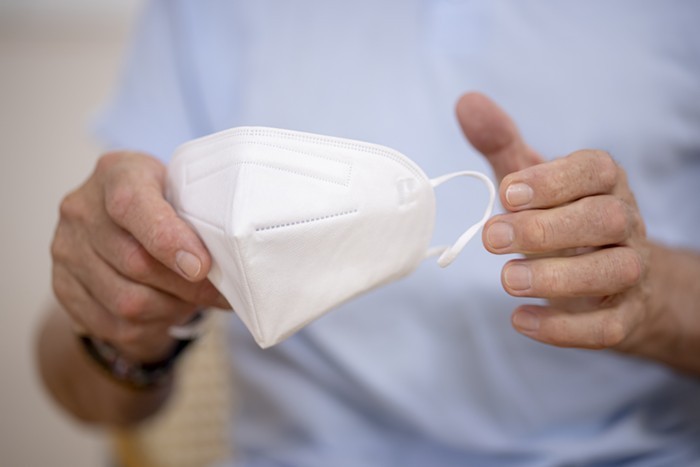 Here's the picture we use every time mask mandates are suspended. Think it'll be the last time you see it? EMS-FORSTER-PRODUCTIONS / GETTY IMAGES

GOOD MORNING, PORTLAND! Look outside at that weather! (This is something I'm telling myself.) Ah! It appears to be a partly sunny day that will rise to a balmy high 59! That's just grand. Now, what do you think about READING SOME NEWS?

• As you may have heard, Oregon's mask mandate comes to an end (at least for now) at midnight tonight, and while that's great news for most, it's a good time to temper that enthusiasm and remember the virus is still out there and still a danger to those who are immunocompromised. Sooooo... be thoughtful and sweet. If interested, Oregon Health Authorities will be giving a media briefing today at 1 pm.

• Health care employees at OHSU’s Richmond Clinic are accusing clinic management of creating a discriminatory, racist environment, despite their year-old promises to fix the situation. Now employees are demanding that OHSU hire an outside consultant to rebuild the culture. Our Isabella Garcia has all the details on this volatile situation.

• Despite the incessant screaming from local wealthy people (and their anti-tourist mouthpiece People for Portland) about our city supposedly being "dead" and a "cesspool," it turns out that a lot of people are still moving here, and we're now the 26th largest city in the nation, up from 29th.

• The Portland Art Museum's Northwest Film Center has recently changed their name to the Center for an Untold Tomorrow (PAM CUT). Wait... what? While it may sound confusing, the idea behind it is pretty cool and our Suzette Smith provides a great, entertaining explainer.

In @JenniferKayMo's Hear in Portland column this week: Rontom's Sunday Series of shows returns with bangers Brown Calculus, sincere love for the new Oregon Women’s Basketball Anthem—it's by Wynne!— and the Waterfront Blues Festival steps up their game.https://t.co/olBiDulxTH

• If you ever look at something and yell, "What the fuck is that?!?" Then you'll especially enjoy this week's quizzy POP QUIZ PDX trivia theme: "What the FUCK is that?!?" (Plus it contains a bonus Rorschach test! Oooooooooh!!)

• Russia's bombing campaign against Ukraine is expanding into the western portion of the country, as the Biden administration and other countries move to block "favored trade" status with Russia. However while Putin is making gains with his invasion, it's not nearly as rapid as he'd like and they're coming with a steep price.

“I felt like I needed to do something. I could not watch it from afar.” Sergey Korenev is one of 66,000 Ukrainians returning home to defend the country. @MrOlmos writes about his journey from Portland to Ukraine’s front lines in @guardian: https://t.co/kgqoKo3hBA

• Washington lawmakers passed a humongous $1.5 trillion spending bill yesterday that will avoid a government shutdown while also providing emergency aid to Ukraine, but, but, BUT! It does not include $22 billion that was earmarked to fight the COVID pandemic—but who needs that anymore, right? (Puts head down on desk, sobs.)

• Prepare to lose a precious hour of sleep this weekend as Daylight Saving Time starts at 2 am on Sunday (so set your clocks forward one hour before going to bed on Saturday night, and then prepare for an onslaught of articles on Monday asking "Why are we still DOING this???")

China has ordered a lockdown of the 9 million residents of Changchun amid a new spike in COVID-19 cases in the area https://t.co/trzaOyBNEZ

• Actor Jussie Smollett has been sentenced to 150 days in jail after being convicted of lying to police officers about an alleged racist/homophobic attack.

• Great gadzooks, there is SO MUCH great stuff in our annual SPRING ARTS GUIDE, whether you're a fan of film, visual art, reading, or... if you're like me... drag queens! Miss it at your intellectual peril!

• And finally... here's a scene you will NEVER see on the TV show Cops. (Prepare your forehead for a facepalm.)