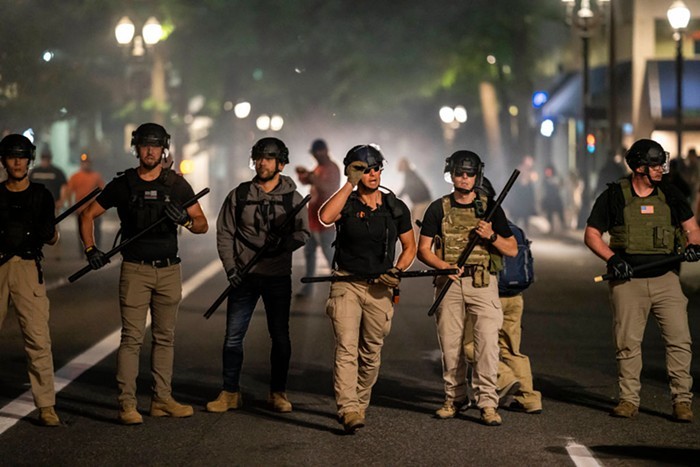 GOOD AFTERNOON, PORTLAND! And a special good afternoon to everyone who attended last night's Dua Lipa show at the Moda Center! (That was me screaming my head off in Section 112.) GODDAMN, that was good! Anyone who wants to join me in starting a church or cult around this superstar, you can reach me via this respected media organization. Now, let's party with some NEWS.

• Though Portland City Council has attempted in the past to disengage from the city's housing state of emergency by putting more lasting measures in place, apparently there's a problem, because they've just extended it for three more years. How come? Our Alex Zielinski explains it all for you.

Businesses requested sweeps and got them, but legal experts warn a cozy relationship between businesses and city officials can compromise fair access and influence policy. https://t.co/WuNoMrReAB

• Not-so-fun fact: Oregon has the highest rate of domestic extremism in the country for its size, according to a new report from the Oregon Secretary of State’s Office, which also recommends the state—and particularly the legislature—needs to step up its game before the situation gets exponentially worse.

Lee Kelly, an artist whose monumental steel sculptures grace gardens and museums across Oregon and beyond, died of natural causes Monday at Leland Iron Works, his home and studio. https://t.co/qJXZPO98rB

She's ready once again for a sexy, lustful relationship... but the current boy ain't cutting it. Should she cut and run or stay for what he does offer? Dan Savage gives some thoughtful advice in this week's SAVAGE LOVE!https://t.co/TvKRYrkAB6

• New US intelligence indicates that Putin's military advisers have been lying to their boss about how badly the war has been going for Russia, because he's a toxic male jerk who really gets mad when he doesn't get his way. (That tracks.) Meanwhile, despite promising to scale back attacks on Ukrainian cities during peace talks, the Russian military continues shelling civilians.

A delegation of Ukrainian lawmakers visiting Washington, DC, have said they believe Russia is just using peace talks with Ukraine as a "smokescreen" for their forces to regroup and re-strategize in Ukraine. https://t.co/fHg74PK5Cl

• It's looking like Republican Sen. Susan Collins is ready to back the Supreme Court nomination of Judge Ketanji Brown Jackson, which could seal the deal and (RIGHTLY) give her the job.

• The Biden Administration is set to lift pandemic border restrictions (that gave the government the right to quickly expel border crossers without offering protections) which started during the Trump years and continued because of COVID. This is expected to drive cruel Republicans insane, but also give them another opportunity to fundraise from their gullible, racist followers.

Planned Parenthood has filed a lawsuit in the Idaho Supreme Court to block the implementation of the state’s new Texas-style abortion ban, calling it an “unprecedented power grab.” (@KBSX915)https://t.co/QYcL1ItbbQ


• Actor Bruce Willis says he is stepping away from his movie career after being diagnosed with aphasia, which impacts cognitive abilities.


#Hubble has spotted the farthest star ever seen! A lucky alignment and natural magnification made it possible for the telescope to see the star’s light, which took 12.9 billion years to reach Earth: https://t.co/bjfAFc94wH pic.twitter.com/pX07SnBm4Y

• And finally, thanks to the amazing DUA LIPA for her jaw-dropping show at the Moda Center last night (and also thanks for allowing me to demonstrate my SICK roller skating skills onstage)!