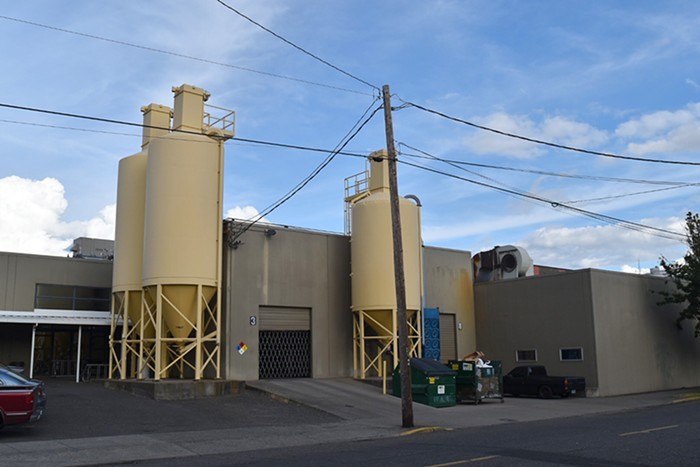 Bullseye Glass facility in Southeast Portland Mercury Staff
In 2016, Portlanders in Southeast Portland’s Brooklyn neighborhood learned that they had been exposed to high levels of toxic metals and carcinogens for over 40 years due to a nearby glass manufacturer. Six years later, they still don’t have clear answers on how their health was impacted.

The Oregon Department of Environmental Quality (DEQ) discovered Bullseye Glass, a Southeast Portland facility manufacturing colored glass for art, was emitting 150 times the state’s threshold of cadmium and arsenic—carcinogens that can lead to cardiovascular disease and respiratory cancer—in January 2016. The data, first obtained and released to the public by the Mercury in February 2016, caused immediate concern from the public. Bullseye Glass is less than half a mile from Cleveland High School, Winterhaven K-8 School, and a daycare facility, as well as the nearby residential Brooklyn neighborhood.

Following the discovery, Bullseye Glass made an agreement with Oregon regulators to immediately stop using cadmium, arsenic, and hexavalent chromium—another carcinogen discovered through DEQ air testing. While the immediate action was a relief to the surrounding community, questions loomed about how long they had been exposed to the air toxins and whether the exposure had affected their health.

“Until our community gets a solid answer about how bad the [air pollution] was and why we still suffer health effects that will last our entire lives, there will never be closure,” said Jessica Applegate, a neighbor of the facility and member of Eastside Portland Air Coalition, in an interview with the Mercury. “We are still suffering from what happened and we don’t have the facts in order to find good solutions.”

The Oregon Health Authority (OHA) conducted an assessment of the emissions data collected by the DEQ around Bullseye Glass in an attempt to determine the possible health risks the surrounding community faced for approximately 40 years while the facility operated without regulation due to an oversight loophole that only regulated larger glass manufacturers, not smaller facilities like Bullseye Glass. The state’s draft Public Health Assessment (PHA) was published in June 2021—five years after the community first learned that they had been exposed to toxic carcinogens for decades.

The PHA could not conclude whether or not inhaling air around Bullseye Glass prior to 2016 was harmful to human health because of limited data. After being tipped off to high levels of carcinogens in the air around Bullseye Glass by an ongoing study of moss conducted by the US Forest Service, the DEQ tested the air around the facility for one month in late 2015 and received the results in January 2016, prompting regulatory action. The PHA concludes that because Bullseye Glass varied its operations over 40 years, there is not enough DEQ data to determine how long-term exposure to the facility’s emissions impacted the community.

“One month of air monitoring data is not enough to accurately represent long-term air quality conditions related to Bullseye’s 42 years in the community,” the PHA reads. “Bullseye’s operations have been variable over that period.”

However, the PHA did conclude that if someone had been exposed to the levels of arsenic and cadmium measured near the glass facility in 2015 for at least one year, they could have an increased risk of kidney disease. The assessment also found that state intervention and subsequent reductions in emissions at Bullseye Glass reduced cancer risk in the area by 57-fold compared to if there had been no intervention.

During a public meeting about the PHA Tuesday night, several Brooklyn neighbors noted the health impacts they have experienced and witnessed, including kidney disease, cancer, and other health issues that doctors have not been able to diagnose.

“As a parent with a child who has been diagnosed with a kidney issue, it’s hard to know what’s related and what’s not,” said Heather Flint Chatto during the meeting.

According to Katharine Salzmann, a member of the Eastside Portland Air Coalition who lives near Bullseye Glass, the surrounding community will always have a question in the back of their mind whether or not their health issues can be connected to the harmful air pollutants they were exposed to. Salzmann wishes that OHA had done more to make up for the lack of data, like researching Bullseye Glass’s history of operations and extrapolating the level of emissions based on materials used in their production process.

“What we really wanted to know is what were the actual health impacts, and we're not really going to get that,” Salzmann said. “They are offering a speculative assessment of what maybe could have happened based on one month's worth of data. That's frustrating.”

Salzmann hopes that the Cleaner Air Oregon program—a DEQ regulatory program that was created partially in response to the Bullseye Glass discovery—can be a more proactive oversight system that will avoid issues like this in the future. Cleaner Air Oregon was created in 2018 to close gaps in DEQ’s air permit program that allowed some facilities to operate while emitting harmful pollutants, like Bullseye Glass. The program requires previously unregulated facilities to perform risk assessments and reduce their emissions if the assessment finds that their emissions pose a risk to human health. Salzmann, who helped develop the Cleaner Air Oregon program as a volunteer committee member, hopes that this new type of regulation pushes the state towards a “polluter pays” model that holds polluting businesses responsible for the environmental damage their operations caused.

A main topic of the public meeting Tuesday was what closure would look like for the surrounding community. Salzmann said that OHA and DEQ have been asking community members that for years.

“I feel uncomfortable and kind of distressed that the agencies ask us about that every time we get together, and everybody says there really is no closure,” Salzmann said. “After a while, it starts to sound like they just want it to be over when really, the community dialogue needs to go on as long as it needs to go on.”

“Are we moving on? Yes, we want to put it behind us as much as anybody,” Applegate said. “But you can’t [have closure] when you’re sick and your family is sick and your neighbors are sick.”

OHA is accepting written public comment on the PHA draft until May 5.