At an Abortion Is a Human Right rally in Lownsdale Square on Tuesday May 3, 2022, a demonstrator holds a sign reading "My body, my choice, my insatiable thirst 4 revenge." Suzette Smith
Portlanders gathered downtown Tuesday evening to protest a draft US Supreme Court decision suggesting the court will soon overturn the right to an abortion enshrined in Roe v. Wade. The draft majority opinion, leaked to Politico Monday, reflects that the majority of Supreme Court justices are in favor of unraveling Roe’s federal protections and letting states decide whether or not to legalize abortion.

While the sudden threat to bodily freedoms brought out sizable crowds at two downtown events, disagreements between participants over protest methods eventually derailed the latter assembly.

One rally, which was organized by the Democratic Socialists of America (DSA)'s Portland chapter drew approximately 600 people to Lownsdale Square Park, across from the city's federal courthouse. Unfolding barely 24 hours after many in the crowd first heard of the SCOTUS draft decision, those assembled seemed to fluctuate between shock, anger, and sorrow. One stood before the crowd and described "heartbreak at 5:45 in the afternoon," when they began to receive messages from friends about the news. 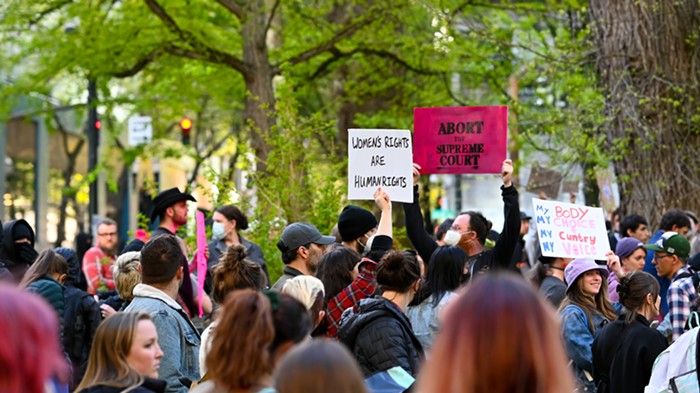 A crowd of around 600 people demonstrated in Lownsdale Square Park, demanding that access to safe, legal abortions not be overturned by the Supreme Court. Suzette Smith
Lorreina Guyette told the Mercury she viewed the moment as "a wake up call," and had concerns that overturning Roe v. Wade will lead to a loss of other civil rights.

"I come from a family that is six generations of Mexicans living in the United States," Guyette said. "My grandfather was part of the Chicano movement. My grandmother was a union organizer. I refuse to let everything they've done go to waste."

Allyson Ford, a demonstrator wearing a long red cloak and white bonnet, in the style the dystopian novel and TV show The Handmaid's Tale told the Mercury she saw the event as mournful, but hoped that there would be more.

"I was livid yesterday," Ford said. "I was immediately looking for something to do. It's awful to watch the rights that your mother and your grandmothers fought for just evaporate."

Crowd testimonials and calls to action made up much of the brief DSA rally. Spencer Mann of the Reed College Young DSA said that had always been the plan. DSA hoped to begin building a community response that would lead to organizing and making a change. "It's not enough to appeal to power without any leverage behind it," Mann told the Mercury. "We're trying to build that leverage, and that starts with community." 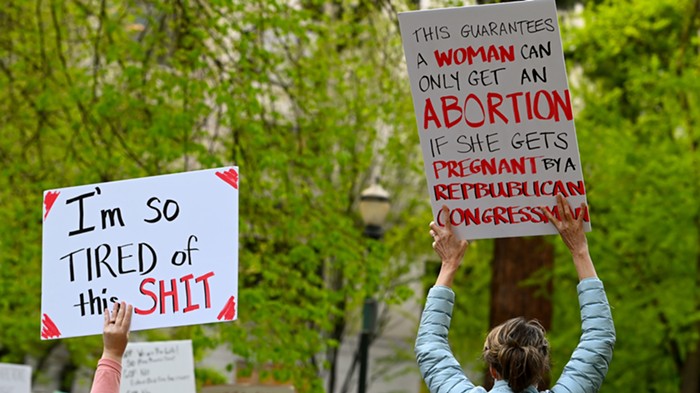 Signs at an abortion rights demonstration in Lownsdale Square on Tuesday May 3, 2022 Suzette Smith
As the DSA rally wound down after 6 pm, people began to disperse, with some moving to Portland State University (PSU) for a rally spearheaded by a different socialist group—Party for Socialism and Liberation. While the main crowd dwindled, demonstrators in head-to-toe black clothing began spray painting messages about abortion rights on the Mark O. Hatfield US Courthouse.

There were no visible police officers at the scene.

Mann's statements to the Mercury were cut short when a person interrupted Mann and shouted, "Pick up a brick! Join us!"

"There are a lot of people with a lot of different approaches," Mann said, of the interaction. "They think what they're doing is more radical. I think organizing is more radical. What we're doing here today isn't for that person. We're here for people who think abortion rights should be protected and who might be interested in organizing with us around that."

Approximately 1,000 people met at PSU's Urban Plaza in support of abortion rights. Suzette Smith
The divide between those who wanted to speak and those who wanted more action was even more apparent at PSU where a larger crowd of approximately 1,000 met at the college's Urban Plaza at 6:30 pm. They spilled into SW 6th and blocked transit for about 15 minutes before part of the crowd marched back to Lownsdale Square Park.

However, when the crowd standing in road began walking north, much of those assembled followed. The marchers had a small band of brass instruments and drums within their ranks. Around 800 marched through the streets back to Lownsdale Square where the crowd eventually disbanded.

Portland Police announced a little after 11 pm that government buildings and cafes were damaged that evening, attributing it to the demonstrations. They made one arrest.