In a presentation to the project’s Executive Steering Group (ESG)—which is made up of transportation officials and politicians from both sides of the river—project officials proposed a preliminary bridge design, called a Locally Preferred Alternative (LPA). The LPA includes an eight lane bridge featuring high-capacity light rail and a “partial interchange” connection on Hayden Island, a residential island in the middle of the Columbia River. The project staff stressed that any renderings of the bridge design are not specific beyond those three primary elements.

“I think what we’re putting in front of you today is a very good solution to move this program forward,” said project director Greg Johnson during Thursday’s presentation.

The project staff said this design aligns with the project’s goals of constructing a bridge that is equitable, climate-conscious, and safe. The light rail design would connect Vancouver and Portland’s transit systems, expanding public transit availability and providing “greener” modes of transportation.

The most controversial element of the design is the number of lanes on the bridge. Project staff members have long advocated for the addition of “auxiliary lanes”—lanes that are added via on-ramps that give drivers more time to merge into the through lanes on the bridge—to the existing three through-lanes in each direction. Because there are seven interchanges along the five mile project area leading up to and including the bridge, project staff say that having auxiliary lanes is important to reducing fender benders and reducing traffic congestion, particularly as traffic demand is expected to increase as the region grows. 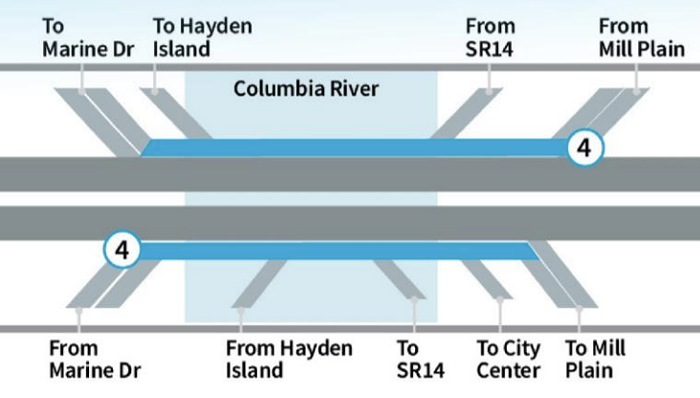 The proposed lane configuration for the I-5 bridge. The gray lines represent three through lanes. Interstate Bridge Replacement Project
Environmental activists argue that the additional lanes on the bridge will only increase car capacity, which increases greenhouse gas emissions. Earlier this year, over 20 environmental groups from both sides of the river formed a coalition called the Just Crossing Alliance to act as an environmental watchdog for the Interstate bridge project.

“We know that auxiliary lanes will induce demand and will directly contribute to the climate crisis,” said Brett Morgan, the transportation and metro policy manager for coalition member 1000 Friends of Oregon, in an interview with the Mercury. “Yes, we are a growing region and we’re going to continue to grow, but we will never be able to build enough lanes to satiate the demand that commuters will have.”

Much of the bridge replacement team’s evidence for needing auxiliary lanes to address growing traffic demand is based on traffic demand models. But, historically, traffic projections for the region have been inaccurate. For example, during the first attempt to replace the interstate bridge starting in the early 2000s, project leaders predicted that the region would experience a 1.7 percent annual increase in traffic demand. In reality, the growth in traffic from 2005 to 2019, according to the Just Crossing Alliance's calculations, was 0.3 percent each year.

Transportation planners in Washington are also skeptical of the project team’s traffic projections, including the claim that additional auxiliary lanes will reduce traffic congestion. Washington drivers commuting into Portland face the most congestion and Washington stakeholders have the most incentive to push for any congestion-solving design options. However, Washington Secretary of Transportation Roger Millar cautioned against looking to auxiliary lanes as the solution during an ESG meeting last month.

“Something I know about [traffic] models almost without exception is that they wind up being wrong, particularly the further out you go in time,” Millar said. “Every time we provide that kind of [additional lane] capacity, it gets filled.”

Chris Smith, co-founder of environmental group and Just Crossing Alliance member No More Freeways, noted that in order to reach Oregon’s goal of reducing greenhouse gas emissions by 45 percent below 1990 levels by 2035, transportation planners need to break free from the cycle of building more lanes to accommodate more cars, which is proven to only incentivize more car use.

“Forecasters say there is going to be more traffic, so we provide more capacity and, what do you know, there’s more traffic,” Smith said in an interview with the Mercury.

The debate over using auxiliary lanes to combat traffic congestion is also central to the I-5 Rose Quarter corridor project which aims to mitigate another interstate bottleneck six miles south of the bridge. No More Freeways has been lobbying against an increase of lanes through the Rose Quarter for years, arguing for the state to invest in efficient public transportation and implement planned tolling along the corridor to manage congestion. The interstate bridge will also eventually be tolled.

The ESG has until the end of July to provide input, suggest modifications, and ultimately endorse the design. Portland leaders indicated Thursday that they will offer conditional support of the LPA.

City Commissioner Jo Ann Hardesty, who oversees the city’s transportation bureau and is a member of the ESG, said that while the bridge proposal is not what Portland leaders would have designed, it is a reasonable compromise.

“Today we see a recommended alternative that is not perfect and not what [the city of Portland] would have designed because it is likely that it could result in a marginal increase in automobile capacity,” Hardesty said during the ESG meeting. “But… we finally have before us a project design that appears acceptable with certain conditions that will help us make sure the project delivers on its goals.”

Metro President Lynn Peterson, an ESG member, also offered conditional support of the LPA while noting that Metro Council already has a strict list of climate and equity-related conditions that must be met in order to garner the council’s endorsement of the design.

Once the basic design is finalized this summer, the project will begin the National Environmental Policy Act (NEPA) process, a federal evaluation that determines the environmental impacts of the project. The NEPA process is expected to be completed by the end of 2023, during which the project team will simultaneously be asking the Oregon legislature to commit $1 billion towards the project in the 2023 legislative session.