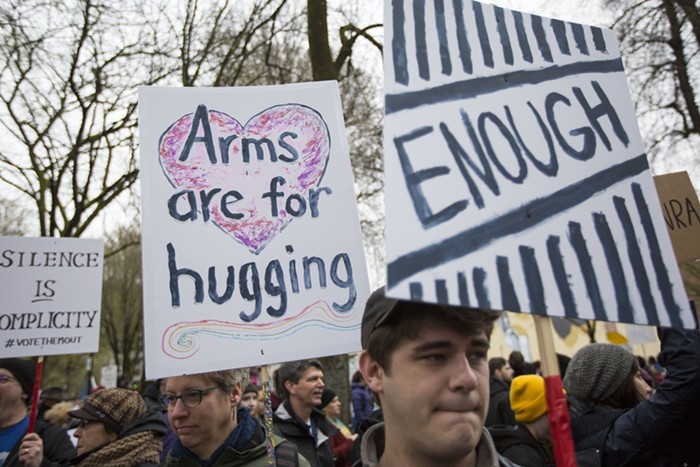 A scene from the 2018 March for Our Lives in Portland. Mercury Staff
As the Grand Floral Parade snakes through Inner Northeast Portland Saturday morning, another cluster of Portlanders will take to Southwest Portland streets to rally for stronger gun laws.

The Portland March for Our Lives event, organized by local high school students, will be held in coordination with similar marches across the country Saturday. The lead event, taking place in Washington, DC, will be led by the same group who organized the first March for Our Lives in 2018—students who survived that year's mass shooting at a high school in Parkland, FL.

Athena Hsu-Chen, a 16-year-old sophomore at Oregon Episcopal School, is organizing Saturday's event in the midst of studying for her final exams. Aside from her studies, Hsu-Chen said she's been distracted in recent weeks after the news of a mass shooting at an elementary school in Uvalde, TX. While Hsu-Chen said she's been participating in active-shooter drills at school since preschool, the reality of a mass shooting taking place at school never gets easier to digest.

"The week after the Uvalde shooting was hard," said Hsu-Chen. "I just kept on thinking of kids younger than my little brother getting shot... and the image of that little girl smearing the blood of her classmates on herself to play dead. This can’t go on any longer."

That's why Hsu-Chen is working with other students to rally Saturday to call on state and federal legislators to pass stricter gun laws, like the federal "red flag" bill that would take guns away from people at extreme risk of harming themselves or others. The group will also be lobbying for voters to support Initiative Petition 17, a proposed state measure that would require Oregonians to submit to a background check, firearm training, and obtain a permit before purchasing a gun.

Hsu-Chen has a background in activism work. In 2020, she helped create care packages for protesters injured during Portland's racial justice protests, and earlier this year, she served as her school's lead in the Portland Climate Strike march. Hsu-Chen worked with other student organizers involved in climate activism to organize Saturday's march. She feels that it's critical for youth to be on the front lines of the fight.

"My class was just learning about the civil rights movement in the 1960s and how teachers allowed students to walk out and participate, because they weren’t scared of repercussions like their parents were," Hsu-Chen said. "I think that carries into today as well. I was in a meeting yesterday with organizers and my mom was with me. We had a public defender telling her possible risks and that horrified my mom. But I wouldn’t mind getting arrested if it meant people were actually noticing that children take this seriously."

According to Edith Gillis, an adult volunteer supporting the protest, Saturday's event will feature statements on video or read aloud by Oregon Senator Jeff Merkley, Representative Earl Blumenauer, and City Commissioner Jo Ann Hardesty. Representatives from Moms Demand Action and Everytown for Gun Safety will also be in attendance. The organizers are unsure how many to expect Saturday, due to Rose Festival distractions, but are prepared for a big crowd. In 2018, the inaugural March for Our Lives in Portland attracted an estimated 10,000 people.

The march will begin shortly after 11 am at Portland State University's Urban Plaza (1825 SW Broadway) and end at Portland City Hall.