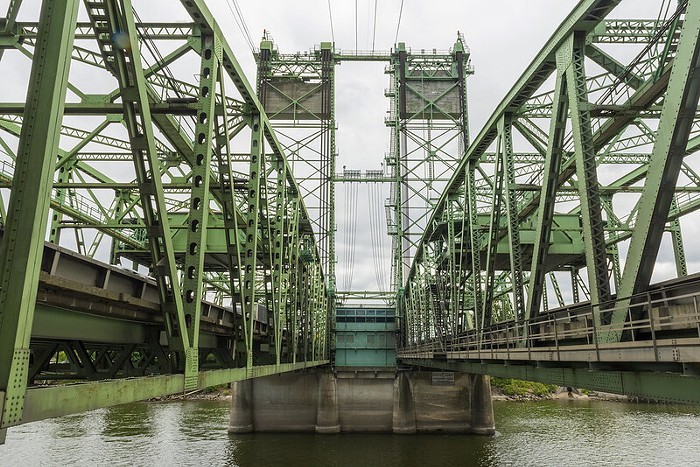 Portland politicians, transportation leaders, and other stakeholders have all agreed upon the preliminary design for the Interstate 5 bridge replacement project as of Thursday. Pending one final vote from Vancouver’s regional transportation council, which is expected to pass, the Interstate Bridge Replacement (IBR) project will move into the federally required environmental review process—a major milestone in the revived effort to replace the bridge connecting Portland and Vancouver.

“Nobody is jumping up and down and saying ‘This is the best thing I’ve ever seen’,” said Commissioner Jo Ann Hardesty, who sits on the IBR executive steering group, “which means we must be on the right track because people have made compromises and accepted that this is a project that will change the entire region, but cannot fix all of our region’s problems.”

The approved bridge design, called a Locally Preferred Alternative (LPA), establishes an eight-lane bridge featuring high-capacity light rail and a “partial interchange” connection on Hayden Island, a residential island in the middle of the Columbia River. The design’s approval is not a greenlight to build the bridge, but rather approval to research its elements through a federal environmental analysis.

Officials didn’t approve the LPA without some skepticism. During the Wednesday Portland City Council vote, Hardesty said that this is not the bridge Portland would build if the city was leading the project on its own. TriMet board member Ozzie Gonzalez characterized the project as “not perfect, but something” and voted against the LPA in June, but only after confirming that there were enough yes votes to move the project forward. Metro Councilor Gerritt Rosenthal characterized his vote as an “extremely reluctant ‘aye’” before the council ultimately approved the LPA Thursday afternoon.

In short, while no one is enthralled with the I-5 bridge replacement project, they are in agreement that it is a necessity.

The current I-5 bridge is seismically vulnerable, has poor options for pedestrians and cyclists,  and is congested with traffic an estimated seven to ten hours per day. Both supporters and critics of the IBR project agree that the bridge should be improved, but have different visions of what an improvement looks like.

Environmental advocates are pleased with the project’s plan to add high-capacity light rail service and improved pedestrian and bicycle infrastructure to the bridge. However, members of the Just Crossing Alliance (JCA)—a group of nearly 30 environmental organizations on both sides of the river—have a host of concerns about the LPA. JCA members believe that the additional auxiliary lane added to the bridge to improve congestion will bring more drivers to the bridge because of induced demand—an observed phenomenon that shows when there is more space created for cars, more cars will fill that space—thus maintaining congestion and raising carbon emissions. Additionally, the alliance argues that the proposed span bridge design is too low for large ships to pass under as determined by the US Coast Guard, and choosing a lift bridge design could solve that problem.

Members of the JCA spent the past month urging City Council, Metro, Port of Portland, and TriMet to vote no on the LPA until another bridge design option was considered.

“If you were given $5 billion to create a project that seriously addresses climate, economic, and seismic concerns, is this really what you would end up with, or is it just what ODOT is forcing you to settle for by providing no other options?” Portland Youth Climate Strike organizer Adah Crandall said before the Portland City Council vote. “I don’t trust you all are making decisions with any consideration with the future of my generation on this planet.”

IBR program administrator Greg Johnson refutes the JCA’s concerns, claiming that the bridge project team’s analyses have not shown evidence of induced demand, the lift bridge design contributes to the current bridge congestion, and that the project has time to find a compromise with the Coast Guard before needing to obtain its approval for the bridge height in 2025.

According to Johnson, the delays caused by the additional study of another bridge option the JCA is calling for would jeopardize the project’s future. While the complete funding plan for the bridge hasn’t been determined, the IBR staff plans apply for federal funding from President Joe Biden’s recent Infrastructure Investment and Jobs Act, which created $40 billion for bridge projects. Biden has used the I-5 bridge as an example of the type of bridge project the money is intended for. However, those grants have application windows and delivery timelines attached to them.

“We are at a unique time in our history in that we have a federal bill that has dollars for projects like this, and this has not been the case for a number of years,” Johnson told the Mercury. “If we miss this window, then we will miss the ability to get this thing funded in a reasonable way. So when folks tell me ‘Push this out further’ or ‘Don't do this,’ what I'm hearing is that they want to see this project die on the vine.”

Several regional officials cited that urgency when voting to approve the LPA.

The IBR’s next major step is to secure a $1 billion investment from Oregon legislators during the 2023 legislative session, so that’s where environmental advocates will now focus their attention—and they already have one key legislator on their side.

Representative Khanh Pham, who sits on the bi-state legislative council for the IBR project, testified to Metro Council Thursday urging them to vote no on the LPA until more study on the traffic projections and cost and financing of the bridge project can be done. Pham’s concerns stem from the estimated $5 billion bridge project going over budget and restricting transportation funds for smaller, much needed safety projects in Portland.

“As a legislator who will be asked to find new revenue for all of our new transportation infrastructure projects, we need to be able to fund both this bridge and other needed transportation projects in our region,” Pham said. “By choosing a right sized bridge, we can do both.”