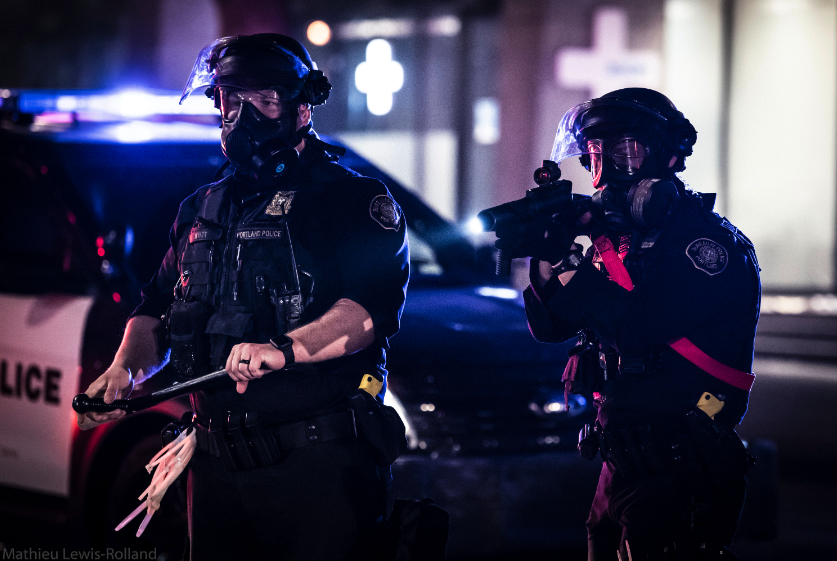 The fallout of police use of force against members of the public during 2020 racial justice protests has cost more than just negative headlines for the city of Portland.

As of early August, the city has paid out just over $325,000 in legal compensation to Portlanders who sued the city after they were injured by the Portland Police Bureau (PPB) at a civil rights demonstration in 2020. Those payouts, calculated with assistance from data collected by Portland Copwatch, have all come in the form of settlements—or, a payment given to the plaintiff in exchange for them dropping the case, absolving the city (and its police) from any guilt in the process. The total cost of the settled 2020 cases represents eight separate lawsuits, ranging in settlements from $100,000 for a man who was kicked and pepper sprayed by police while registering people to vote at a rally to $12,000 for a woman shot by a flashbang grenade as she was leaving a demonstration.

While a third of a million dollars is a significant amount, it lies in stark contrast with the financial settlements coming out of other US cities that saw the same type of police response to 2020 protests.

In Minneapolis, where the murder of George Floyd sparked the first surge of 2020 protests, the city has so far agreed to pay at least $5.4 million to resolve two lawsuits filed by demonstrators injured by the police. In Columbus, the total number is $5.75 million for a single case filed by 32 plaintiffs. In Oakland, the city has paid $1.5 million to resolve a lawsuit filed by 25 people who were harmed by police during 2020 protests. And in Austin, city officials have handed over a combined $14 million from six separate settlement agreements with protesters.

To be sure, at least 20 lawsuits against Portland police are still pending in state and federal court, and some will surely resolve in a payment from the city. But that still doesn’t explain why, in the same two-year span, Portland has paid out so little to protesters hurt by its police officers compared to other cities where demonstrators were met with equal—if not lesser—police force during 2020. So what sets Portland apart from these kinds of payouts?

Juan Chavez, a lawyer with the Oregon Justice Resource Center (OJRC) who has represented several people in lawsuits against PPB’s 2020 actions, jokingly calls it the “Oregon tax of civil rights.”

“Historically speaking, Oregon juries aren’t generous with money or finding liability in protester cases against the police,” said Chavez. “I think the [city] knows that and exploits that with their settlement recommendations. We haven’t seen a successful protest trial in quite some time.”

After the city is hit with a lawsuit, it heads to the city’s Risk Management Division, which partners with the City Attorney’s Office to analyze the case. The two offices work together in calculating the predicted cost of a case and making settlement offers, if appropriate.

There isn’t one tool the city relies on to determine a lawsuit’s potential cost for the city. In an email to the Mercury, a spokesperson from the Risk Management Division listed different factors taken into account when making this calculation.

“Considerations can include: liability exposure, amount and type of damages, available defenses and cost of continued litigation,” the email reads. “Prior settlements on similar cases are also considered but are not the primary factor in determining this value.”

The city dips into its internal Insurance and Claims Fund to cover settlement costs, which is then reimbursed by the bureau responsible for the claim. This means that the $325,000 of 2020 protest-related payouts comes directly from the PPB's annual budget.

In making settlement recommendations to Portland City Council—which must approve any settlement agreement over $5,000—Risk Management staff usually note that, based on their investigation, they believe “there is a risk” that the city may be found liable if the lawsuit went to trial. Agreeing to settle both keeps the city out of court and shields them from admitting guilt.

It’s a path that Portlanders who sue the police also appear more comfortable with, too. That won’t change, Chavez suspects, until Portland sees a trial where a jury determines that the city is liable for the way its officers treated a protester.

“We’re all looking for the next protest case that succeeds in Oregon to figure out how jurors are feeling,” he said.

Chavez will have the opportunity to test this theory in a few months, when his client Linda Senn is set to face Multnomah County Deputy Kyle Smith in court over a lawsuit she filed against Smith after he pepper sprayed her at a 2016 protest inside Portland City Hall. Chavez said he hopes Senn’s case can prove as a temperature check for how jurors respond to protester’s lawsuits against police.

It’s clear where juries stand in other states. In April, a federal jury determined Denver police used excessive force against 12 nonviolent protesters, ordering the city to pay the plaintiffs $14 million (the city has since announced it will appeal the verdict).

Jason Kafoury, a Portland lawyer who is also representing several protesters suing the PPB for use-of-force in 2020, doesn’t believe there’s anything especially unique about Oregon juries that convince the city and plaintiffs to settle. He suspects that the biggest reason Portland hasn’t paid much for 2020 protester injury cases is based on court delays due to COVID-19.

“My guess is that there’s a lot more cases out there that are still pending than have been settled,” said Kafoury.

He’s not wrong. There are at least 20 federal and state lawsuits against PPB for using force against protesters in 2020 that remain unresolved.

“We’ll probably take at least one of these cases to trial,” said Kafoury, of the several lawsuits his firm has filed against the police on behalf of Portland protesters. Kafoury said he only suggests settling when the case doesn’t have enough independent eyewitness testimony or video to help it prevail in court. But, Kafoury said, that’s not the case in many of these police cases. He’s confident that, based on the harmful and well-documented impact PPB left on Portland in 2020, he’ll see jurors side with the plaintiffs.

“With the information out there,” he said, “there may be an outrage factor from the jury. I wouldn’t be surprised.”