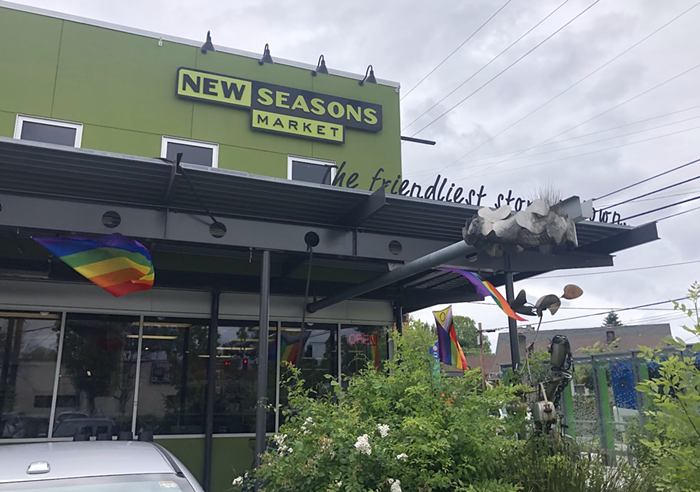 Workers at New Seasons' SE Division store have voted to unionize, forcing the grocery chain's management to formally recognize the New Seasons Labor Union. A total of 62 workers voted to unionize, with 15 voting against it. A majority vote in favor of the union was required to win the election.

The union, which first filed their intent to unionize in late May, was formed in response to changes in healthcare coverage, unreliable scheduling, and other concerns associated with the market being purchased by an international retail company in 2019. Wednesday's vote follows a months-long union-busting campaign by New Seasons management at the SE Division store—which is called "Seven Corners" for its location at the crossroads of several streets.

Employees told the Mercury that management had removed informative material from the store's break room about the union effort, and replaced it with an anti-union letter written by New Seasons' CEO, Nancy Lebold. Management also posted flyers that attempted to debunk reporting on the union campaign by the Mercury.

The Seven Corners store is the first of several Portland-area New Seasons stores that have filed to unionize this summer. Workers at the market's stores in Sellwood, Slabtown, and Hillsboro have all filed petitions with the National Labor Relations Board (NLRB) to form a union. After workers file a petition, their employers have the opportunity to voluntarily recognize their union and begin meeting to hash out a contract. Because New Seasons has refused to voluntarily recognize these stores' unions, workers have been obligated to hold elections overseen by the NLRB. Seven Corners is the first second New Seasons store to hold a vote.

In a statement shared with the Mercury, New Seasons Labor Union said it was proud to join in a "historic moment for organized labor in this country" by organizing independently.

"Recent wins like ours and Amazon Labor Union show that the rank-and-file workers are willing and able to self-organize for a better workplace," the union statement reads. "We are reinventing the playbook, even as management relies on the same tired old arguments against unions."

It continues: "This ragtag group of grocery workers and community supporters organized in our limited spare time to pull this together, and we did it without the institutional support of established organized labor. We built this for ourselves because we want a worker-led voice at the bargaining table."

New Seasons has five days to challenge the results of Wednesday's vote. Following that, the company will be required to meet with its union at the bargaining table to begin work on a contract. In a statement to the Mercury, New Seasons management did not address whether or not they would challenge the vote.

"We respect each staff member’s right to choose representation and the decision the majority of our staff have made today," reads the statement."As we committed to from the beginning of the petition and election process, we will continue to communicate with transparency in service of our legacy of putting our staff members first."

Correction: A previous version of this story said that the Seven Corners store was the first New Seasons market to hold a union vote, when the Hillsboro chain held a vote last week. The story has since been corrected to reflect this fact.