The park was the “Crown Jewel” of Portland’s 2008 skatepark masterplan. 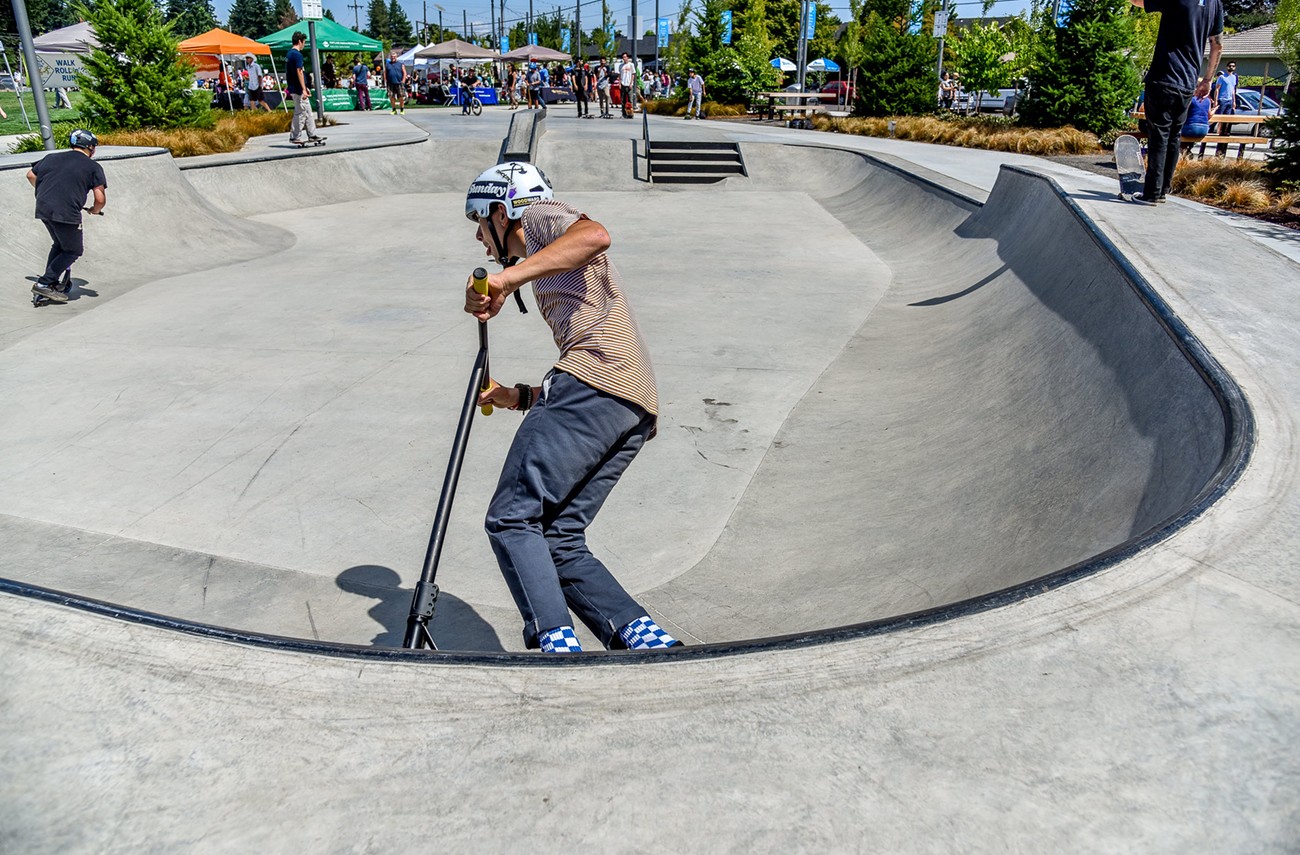 One of Portland's current skateparks at Gateway discovery Park. Portland Parks and Recreation

Home to the nationally-acclaimed Burnside Skatepark and pandemic-success Secret Roller Disco, Portland’s skateboarding and roller skating scene is vibrant and burgeoning—and local skaters have a plan they believe will make it even better.

“As awesome as our skate scene is here in Portland, I think we’re missing out on something that could be a huge asset to the community as a whole: The Steel Bridge Skatepark,” said Janae Hagel, an organizer with skate group Community In Bowls, who joined fellow skate advocates in urging City Council Wednesday to support the once-promised public skatepark.

The Steel Bridge Skatepark—a 30,000 square foot covered skatepark at the west side base of the Steel Bridge—was identified as a future skatepark location in Portland’s 2008 Skatepark Masterplan. Despite approval from City Council at the time, the park never moved past the early design phase.

Now, Portland skating groups are pushing the city to follow through.

“It’s the Crown Jewel of the masterplan,” said Ryan Hashagen, owner of Icicle Tricycles and one of the supporters of the skatepark. “There has been a resurgence of interest and activity and the skating scene is thriving. Skateparks are bursting at the seams, but we have no covered, well-lit, centrally located public transit-accessible park in the city. This park would cover all of those elements that don’t currently exist.”

Hashagen said that the skatepark could not only serve skateboarders, but BMX riders, scooters, roller skaters, and free skaters as well.

Proponents of the skatepark argue that building a state-of-the-art park would not only provide space for skating, but foster community development and gathering space in Old Town—an area of Portland that has been hit hard by rising gun violence, visible homelessness, and economic losses during the pandemic. If organized and built quickly, the Steel Bridge Skatepark could also serve as a space for skaters who are displaced from Portland’s Burnside Skatepark, which is expected to close during the construction of the new Burnside Bridge slated to begin in 2025.

The Burnside Skatepark began as a DIY project by skateboarders who, in 1990, poured their own cement to create a park under the east end of the Burnside Bridge. In homage to that project, Steel Bridge Skatepark fans poured a bag of concrete at the park’s planned location in July, to ceremonially “break ground” on the skatepark.

“[The proposal] speaks to an opportunity to turn an area that’s historically been fairly blighted into something that the community can be really proud of,” said Mayor Ted Wheeler.

Advocates for the park have already been in conversation with Wheeler’s staff about what it will take to move the project forward. However, questions raised by the Council Wednesday revealed bureaucratic hurdles the project will have to navigate in order to come to fruition.

The parcel of land the skatepark would be built on is co-owned by Portland Bureau of Transportation (PBOT) and the Oregon Department of Transportation (ODOT), which is unusual. According to Tom Miller—Wheeler’s staff member who has been working on the proposal with community groups—ODOT has indicated their willingness to transfer ownership of the area to the city, but no formal documents have been drawn up.

Even if the city gained full ownership of the land, it’s not clear which department would oversee its development and upkeep. City Commissioner Jo Ann Hardesty—who oversees PBOT—noted that PBOT has a $4 billion maintenance backlog, and raised concerns over who would be responsible for maintaining the skatepark once it was constructed. Portland’s existing skateparks are maintained by the Bureau of Parks and Recreation.

Another hurdle for the project is cost, which early estimates from the 2000s placed around $10 million. Multiple council members laughed at the steep price tag when Old Town Community Association Chair Jessie Burke shared the estimated cost for the large scale construction project. According to Burke, Prosper Portland—the economic and urban development agency for the city—has already dedicated $250,000 for the project to complete predevelopment analysis of the land and the first phase of architectural drawings. Burke also noted that there is funding available from Prosper Portland’s Tax Increment Financing Districts—regional taxes intended to be reinvested into the area for prosperity—and the project could apply for federal grants once it completed the design phase.

“I think the things that may have stopped this project in the past, like dedicated resources and some entity to be responsible to get it to the finish line, I think we need those questions answered and we’ll have a good outcome,” Hardesty said.

Organizers with the effort to build the Steel Bridge Skatepark plan to keep working with various City Hall staff members to identify the proper next steps to move the project forward.