Mayor Wheeler and Commissioner Ryan were asked to involve the perspective of homeless Portlanders before passing a plan to criminalize homelessness in Portland. 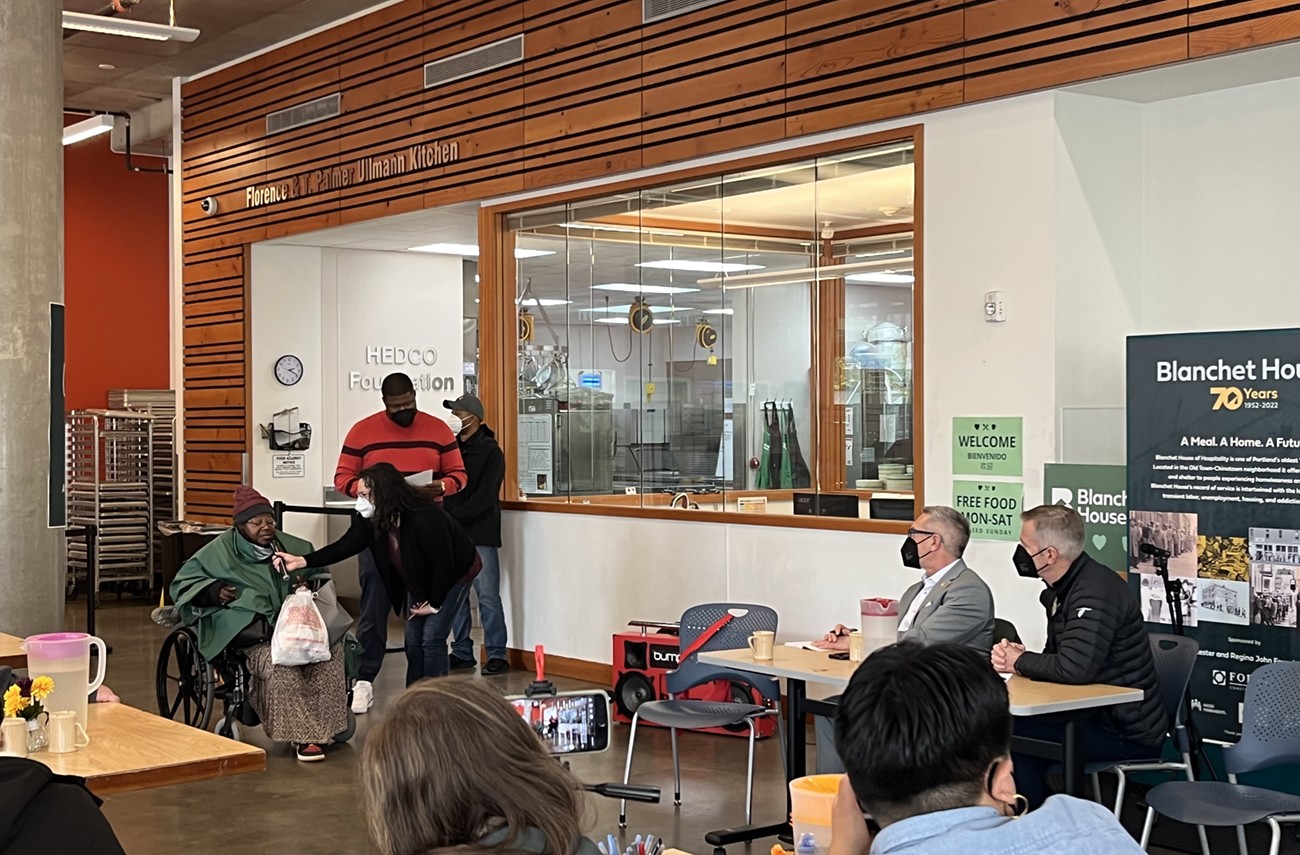 Homeless Portlanders had a captive audience in Mayor Ted Wheeler and City Commissioner Dan Ryan Tuesday afternoon in a public forum where Portlanders who’ve experienced homelessness were invited to share their thoughts on the politicians’ joint proposal to ban camping citywide.

“With the camping ban, you’re saying the one space we’re carved out to be safe is illegal, and we’re now criminals,” said Kerry Robison, who lives in a tent with her husband in Southeast Portland. “Please help us find our place, don’t make policy that criminalizes us just for living outside.”

Robison was one of twenty people who addressed Wheeler and Ryan at the forum, which was organized by Street Roots and held at Blanchet House in the Old Town neighborhood. Wheeler and Ryan were instructed not to speak during the event, and instead asked to listen to what unsheltered Portlanders had to say about their proposal—which heads to a City Council vote Thursday. Both men took notes as each person spoke, occasionally clapping in appreciation after hearing from a speaker.

Wheeler and Ryan’s proposal does more than just introduce a homeless camping ban that would go into effect in the next several years. It also suggests the city fund and create mass encampments where unsheltered Portlanders can set up their tents without penalty. The policy would allow for the creation of three designated camping sites that could eventually house up to 500 people each. It’s not yet clear how the creation of those camps would be funded, or which agency would be responsible for operating the camps.

Several speakers Tuesday raised alarm that the city hadn’t explained how resident safety would be addressed at these proposed camps.

Phoenix O, who was previously homeless, said they had witnessed transphobia and harassment within congregate shelters in the Portland metro area, and couldn’t see how the city’s plan would avoid that kind of abuse.

“Trans and nonbinary people would be really, really unsafe [at a mass camp],” said O. “And criminalizing us because we don’t want to live in a downright dangerous situation isn’t right.”

Others spoke to the fears of bringing children into the mass camp environment, as the region has a dearth of family shelter options.

Marqueesha Ollison, a program manager at the Urban League of Portland, described how she and her children moved to Portland from New Orleans in the wake of Hurricane Katrina. After being evicted without cause from an apartment in Portland, she and her children had no option but to live out of her car for two years. Now housed, Ollison reflected on the challenge of feeling safe sleeping outside each night and how she would never have felt safe in a camp like Wheeler and Ryan have proposed.

“If I was to be kept together with hundreds of people, that would mess with my anxiety,” she said. “It would take me back to the days of when I was in the Superdome when the hurricane hit.”

Ollison teared up at this reference of the New Orleans athletic stadium-turned mass shelter after the natural disaster.

“If you have never been in a situation like that you will never understand,” she added.

The Tuesday forum was the second opportunity for Wheeler and Ryan to hear from members of the public about their proposal. Last week, commissioners heard from more than 200 people at a City Council hearing on the plan. However, due to a request from Ryan's office to place those in favor of the camping ban at the front of the queue, many people who signed up to testify who had experienced homelessness had to wait hours to have their voices heard.

Along with safety concerns at the proposed camps, speakers on Tuesday urged the city officials to invest in what homelessness solutions have been proven to work, like tiny home villages, supportive housing programs, and street outreach from service providers. Many also suggested the men do more of what they were doing at Tuesday forum: Listen to homeless people.

"It would be great if you could maybe bring some people to the table who are actually living in homelessness and ask us what we want, what we need, and do something with that," said Becky Lange. "The problem is, you're constantly infantilizing the homeless, and you're telling us what to do, where to go."

Commissioners will hold a vote on the camping ban and mass encampment proposal Thursday afternoon at 2 pm. Council members will discuss and vote on several amendments to the proposal before holding the final vote. Commissioners had until Tuesday at noon to submit amendments, which center on limiting the number of people allowed in each camp, spreading the camps out equally across the city, and making them accessible to people with disabilities.