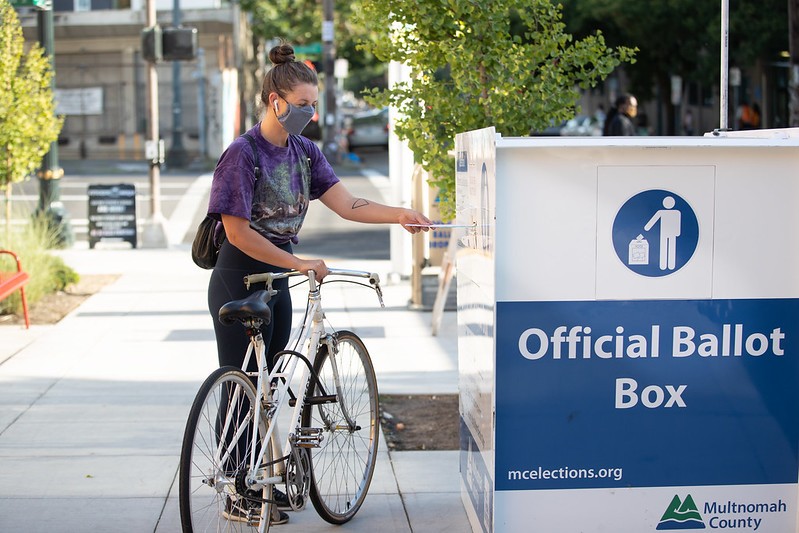 Unless you have fastidiously avoided your mailbox for the past month, you're probably aware that we've got an election on our doorstep. Those piles of glossy campaign mailers and voting guides, topped by an actual mail-in ballot, are meant for the November 8 general election, otherwise known as TOMORROW.

By now, you're in one of three camps: You're either in the 32 percent of Multnomah County registered voters who have already cast a ballot, the 68 percent of registered county voters who have yet to submit their ballot, or one of those locals who isn't registered to vote. For those in the latter category who want to vote, I have bad news: It's now too late to register to vote in order to participate in tomorrow's election. Allow the county's election website to help make sure you're ready to go next time around.

For those registered still wanting to cast their vote, I have good news: It's incredibly easy to do so! The most important thing to remember is that the voting cut-off date is 8 pm tomorrow, November 8. It's up to you to dunk your ballot into one of the county's official ballot drop boxes by that time. Beginning this year, Oregonians can also mail in their ballot and have it counted if its postmarked no later than November 8. To get your ballot postmarked on Election Day, be sure to drop it in a blue USPS mailbox or get it in your mailbox before mail is picked up that afternoon.

(Psst: If you're still uncertain about which ballot measures and candidates to support this election, give the Mercury's own thorough endorsement guide a read.)

After voting, all that's left to do is wait for the results to roll in. In the past, you may have counted on those results being clear by the end of Election Day. But because of Oregon's new vote-by-mail law—allowing people to mail in their ballots as late as Election Day itself—it's best to not expect immediate results tomorrow night.

Thanks to this new law, ballots can arrive up to a week after Election Day, November 15, and still be counted.

This means that, once polls close at 8 pm Tuesday, neither the state nor county will have any idea of how many total ballots Oregonians have submitted this election.

In the past, the state has been able to share the total number of ballots collected shortly after 8 pm, even though they haven't counted all of the votes yet. This has made it easier for news outlets and campaigns to confidently call the winner of an election when the first round of results begin rolling in, because they can estimate if the remaining number of uncounted ballots will be able to significantly impact the results of a particular race.

That won't be the case this year, because ballots mailed on Election Day can still be counted up until November 15. On Monday, a spokesperson for the Oregon Secretary of State's office made this clear in a press email about Election Night: "Due to the new postmark law and other factors, the Oregon Elections Division will not attempt to predict the percent of the vote that will be reported at any given time."

So, there's no telling how long it will take to know for certain which candidates won or which ballot measures passed following tomorrow's election. What is certain is that the Mercury will be on the ground Tuesday night at various Election Night parties covering the minute-by-minute events of the evening.

We'll see you then!