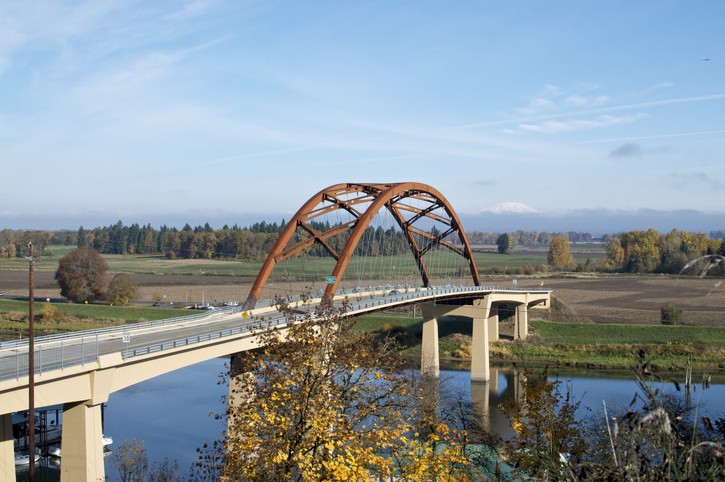 Multnomah County commissioners voted Thursday to advance a plan to rename the Sauvie Island Bridge to more accurately reflect the indigenous population that first inhabited the area. Multnomah County owns the bridge connecting NW St. Helens Rd. to the island, while the island itself is owned by the state of Oregon.

“As white settlers forcibly stole the land and waterways, they used the languages and names of their choices to reflect the story that they wanted told,” said Multnomah County Chair Deborah Kafoury. “But today, here in Multnomah County, we found ourselves with a historic opportunity to support indigenous efforts to heal, reflect the truth of the land, and reclaim both narrative and physical space for those who have always been here.”

The idea to rename the bridge was recommended earlier this year by the Advisory Committee on Sustainability and Innovation (ACSI)—a group of volunteers appointed by the county board to advise on issues relating to the environment and sustainability—as a way to “decolonize waterways and food sources” in Multnomah County.

“The island, known as Wapato Island, is important as a usual and accustomed place for Native American Communities from time immemorial,” the committee wrote in a January letter to the county board. “The County’s bridge should celebrate their living history, and not the history of colonizers who took over the island only after decimating the Native inhabitants.”

Sauvie Island was originally home to thousands of Chinook people. When white colonizers began to settle in the area in the early 1800s, they introduced diseases like smallpox, measles, and tuberculosis that severely infected the indigenous people in the region. In 1829, a malaria epidemic decimated the indigenous population and, according to the National Parks Service, the island was “uninhabited” by the mid-1830s.

A series of colonizers came to the area to claim land and expand trade routes. The colonizers believed the racist idea that the mass death of the indigenous population was divine intervention, with one settler writing that "...a mortality has carried off… [Sauvie Island's] inhabitants and there is nothing to attest that they ever existed except their decaying houses… So you see as the righteous people of New England say, providence has made room for me." In the early 1840s, French Canadian dairyman Laurent Sauvé arrived on the island to establish dairy production, and the island was eventually named after him.

“This island and the bridge are both named after a colonizer that did not respect the land or the people,” Lukas Angus, an ACSI member and member of the Nez Perce tribe, told the board Thursday. “The changing of the name on this bridge is one small thing, but it’s a big perspective change.”

The four Multnomah County commissioners present at Thursday’s board meeting voted unanimously in support of renaming the bridge.

“The naming, how we speak about things, how we refer to things—it’s important,” Commissioner Lori Stegmann said. “That’s how we tell our story, and for too long Native and Indigenous stories have not been told.”

The board’s approval kicks off a public engagement period, during which the county’s tribal affairs advisor will lead discussions with relevant stakeholders before returning to the board with a new name.