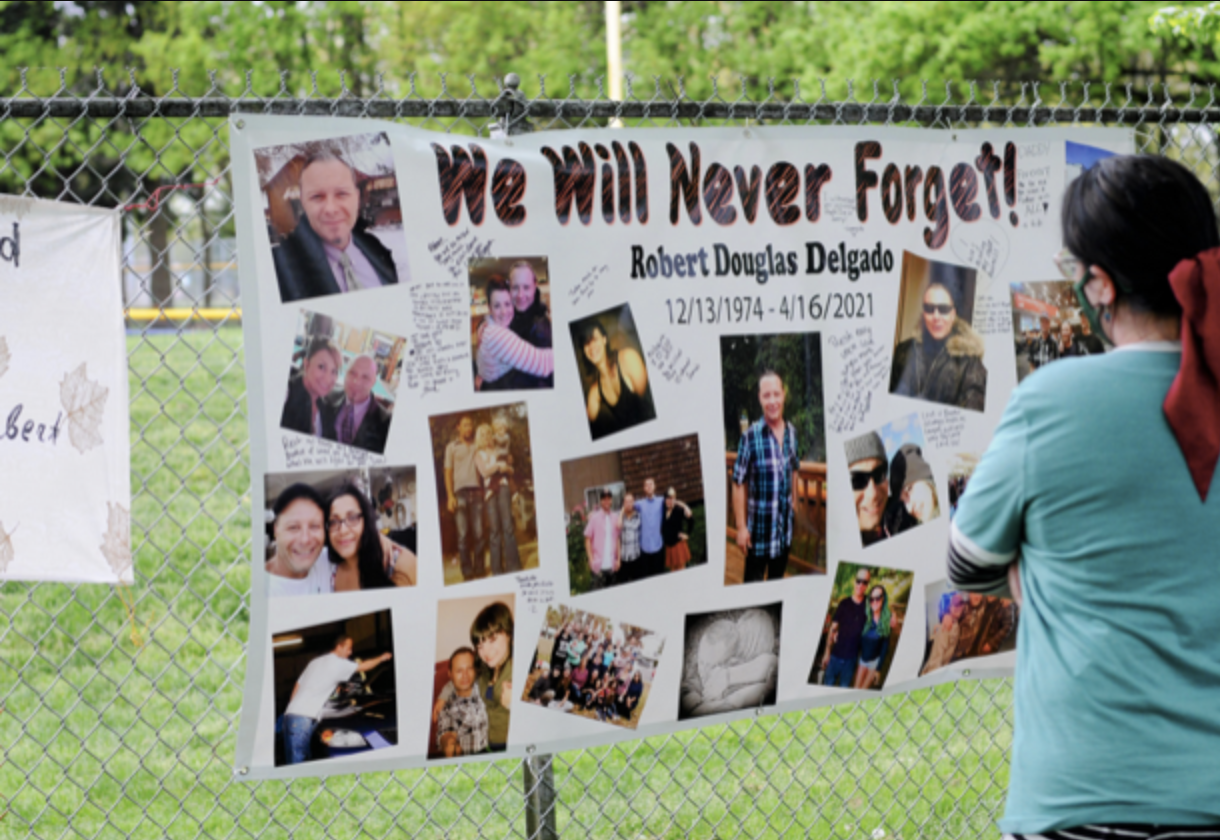 A memorial to Robert Delgado at Lents Park in April 2021. JORDAN BROKAW

In April 2021, Portland police officer Zachary DeLong fatally shot a man named Robert Delgado in Lents Park. Delgado, a homeless man who appeared to be experiencing a mental health crisis at the time, allegedly pointed a fake handgun at officers before he was killed.

DeLong faced no criminal penalties for the shooting. A recent report from the city's Police Review Board (PRB) illustrates why DeLong also faced no internal repercussions for his actions—and shows what PPB's top advisors really believe went wrong that day.

The PRB reviews the most serious allegations of police misconduct that come through the Portland Police Bureau's (PPB) Internal Affairs office, including all instances where police officers use deadly force on a member of the public. The seven-person board is composed of two community members, four police bureau employees, and one representative from the city's Independent Police Review (IPR).

Part of the group's review process requires the board to consider officer discipline proposed by an investigator within Internal Affairs—and then vote on whether or not it believes that discipline is appropriate. The PRB's ruling then heads to the chief of police and police commissioner, who can either impose that proposed discipline or do something completely different. While it's ultimately up to the chief and police commissioner to make the final decision on these cases, they most often follows the PRB's recommendation.

Following the fatal Lents Park shooting, bureau investigators recommended that no penalties be imposed on DeLong for killing Delgado. The PRB agreed.

PPB policy allows officers to use deadly force "to protect themselves or others from what they reasonably believe to be an immediate threat of death or serious physical injury." The PRB's report, made public this month and detailed in a Portland Copwatch press release Wednesday, explains that DeLong was right to shoot a gun at Delgado because Delgado "produced a firearm, took a shooters stance's and took aim" at DeLong and a fellow officer on the scene, Samantha Wuthrich. The PRB added that Delgado used appropriate de-escalation techniques before firing at Delgado, including "verbal commands of warning, and giving [Delgado] time to comply."

The review board report does not mention that Delgado appeared to be experiencing a mental health crisis before he was killed, despite the PPB being required under a federal settlement agreement to follow certain protocol when interacting with someone who may have a mental illness.

The PRB report did identify one problem with the incident: Police don't have enough shields.

After DeLong shot Delgado, officers were prepared to render medical assistance to Delgado. However, even though Delgado was unresponsive and collapsed on the ground, officers couldn't see his gun and weren't convinced that he wouldn't shoot them. Usually in these situations, officers use shields to protect themselves as they approach someone to offer aid, but there were none on the scene at the time. Instead, an officer named Cameron Smith was ordered to fire his less-lethal beanbag gun at Delgado's body.

The PRB said this was the appropriate move, considering the circumstances. But, according to the report, one board member noted that "it does not look good when the public witnesses an officer shooting a downed suspect, even if the officer is using a less lethal weapon" and that it was "unfortunate" that a shield wasn't available.

So, while the PRB shrugged off any officer penalties for their actions surrounding Delgado's killing, the board did recommend the city invest more in ballistic shields to avoid another instance of bad optics after an officer shoots someone.

Correction: A previous version of this story incorrectly identified the investigator in deadly force cases as the Independent Police Review (IPR) instead of PPB's Internal Affairs Office.