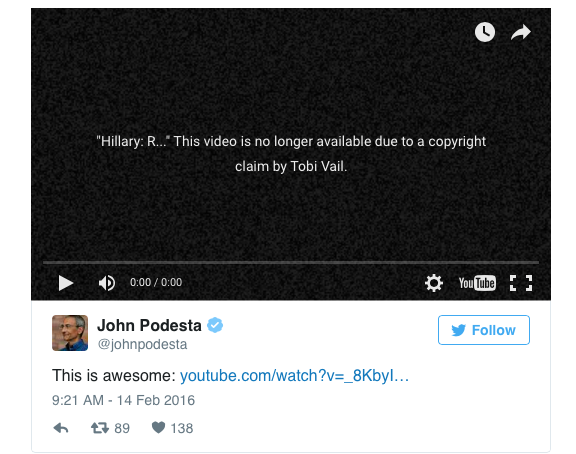 John Podesta is right for once.

The quadrennial phenomenon of musicians demanding that politicians stop using their songs as campaign anthems took an interesting turn yesterday when, as Death and Taxes reported, Tobi Vail, drummer/co-founder of the radical-in-every-sense Olympia feminist punks Bikini Kill, filed a copyright infringement notice against a video in support of Hillary Clinton's presidential campaign set to the group's 1993 single "Rebel Girl."

Initially, the article posited that Vail wanted the video taken down because as her Twitter bio reads: 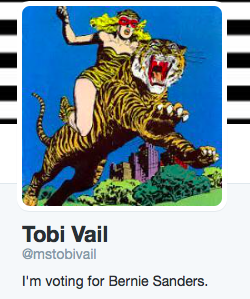 ...but she clarified that she wasn't speaking on behalf of her own politics or those of her former bandmates, but rather, "the will of scores of Bikini Kill fans," and because, Vail told writer Jamie Peck, "we don’t authorize use of our songs in advertisements."


A rather more blunt refutation of the video's conflation of HRC and revolution girl style now may be found in this DailyKos post from Feb 15. Sample:

Jeez, that internet tone is inescapable

To be fair, some of the song's lyrics—"When she talks, I hear the revolution"—don't seem all that Clintonian. While others ("That girl thinks she's the queen of the neighborhood/ I got news for you, she is!")...

Form dictates that I embed "Rebel Girl" below, but given the copyright issue being raised, it feels a little disrespectful to a band I revere, so you should just go dig out your original "New Radio/Rebel Girl/Demirep" seven-inch (produced by Joan Jett, engineered by John Goodmanson, released by Kill Rock Stars), or the Pussy Whipped LP, or the Bikini Kill Singles compilation, all of which were released while Hillary Clinton lived in the White House.

Meanwhile, here's another song with a similar title by a different kind of radical activist woman:

Tags: Politics Music
If you enjoy articles like this, please help the Mercury continue our mission of providing up-to-the-minute information, progressive journalism, and fun things to do in Portland by making a small recurring monthly contribution. Never forget: Your help is essential and very much appreciated!
CONTRIBUTE NOW