Genderqueer Artist Maarquii Could Be Portland’s Next Rap Star 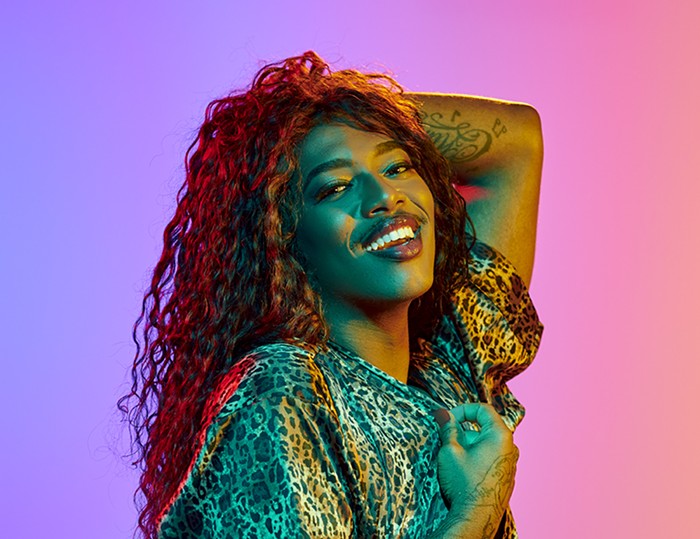 Profiles in Queer Excellence and Resilience

Black & Brown Stripes: Catching Up with Some of Portland’s Most Interesting Queer People of Color

An Overview of Portland’s LGBTQ+ Nightlife for the Newcomer

On a recent sunny afternoon at Townshend’s Tea House, Marquise Dickerson (AKA Maarquii) is dressed more lowkey than I’m used to. There’s no wig or makeup in sight, apart from some nail polish—just a black T-shirt paired with dark shorts, dad hat, and crossbody fanny pack. We order kombucha and get down to business: chit-chatting about what’s in their heavy rotation (Prince, Megan THEE Stallion, lots of trap), and Maarquii’s journey to becoming a fabulous Black, genderqueer, multidisciplinary artist thriving in Portland of all places.

“I was 22, living in Tillamook, working three jobs, and just really, really unhappy,” Dickerson tells me. “The only thing I did to work toward what I really wanted was teach a dance class. But primarily to white kids who, for the most part, were pretty privileged and didn’t appreciate what I was bringing them. It was draining and, ultimately, became just a paycheck.”

Then one morning, as Dickerson got into their car to go to work, they knew they needed to make some big changes. “It was like one of those things where you’re faking it. I was like, ‘Oh I’m so happy to go to work,’ and I just started crying. I remember thinking, ‘I’m ’bout to get in this car and just go somewhere and start over because I need a new start.’ So, I started moving in a different way.

“One day, one of the dudes at the gas station was like, ‘Come over, hang out, and smoke sometime—I make beats and shit,’” Dickerson explains. “So I went over, we smoked, and he showed me beats. And I was, like, ‘Can I have some of these to fuck around with?’ and he sent me a beat pack. I locked myself in my room, wrote to a shit-ton of beats and put out a EP. That was the first time I [felt] like, ‘Oh, I’m trying to make an effort toward this.’”

After moving from Tillamook to Portland to dance (for Nonsense Dance Company with Mykey Lopez, and 11: Dance Co.), and later getting local recognition as a backup dancer for retro-futurist R&B act Chanti Darling, Dickerson decided to take the leap and make their own music.

“Around the time I started dancing for Chanti, I was really starting to miss music,” says Dickerson. “I had an idea of the type of sound I wanted to play, but I didn’t know anyone. Then I played this show for Patrick Buckmaster and was singing during one of my sets, and Jvnitor was there ’cause they were DJing. We linked up, recorded our first song, and since then, it’s been us building that really good collaborative relationship.”

Maarquii put out some eye-catching singles and music videos for bass-heavy industrial bangers like “Wirecutters” and “Dam God,” which showcased their expression through vogueing while embodying high-femme energy with nods of androgyny. On the heels of their debut full-length C.A.B.O., Maarquii is now determined to master the art of creating more high-quality visuals as well as a dynamic live performance, which, for the first time, will include a band.

In today’s cultural climate, where consumers are desperate for diversity and inclusive representation in music and media, I could see Maarquii’s career taking a similar trajectory to rapper/singer/flautist Lizzo’s—especially if Maarquii continues to massage all areas of their craft.

As a genderqueer artist in Portland’s small but lively hip-hop scene, Maarquii is virtually peerless. But sometimes that means having their experiences gaslit by cishet hip-hop heads and rappers who believe the barriers Maarquii faced within the scene have nothing to do with their queer and trans-femme identity. The ingrained divide between Black heterosexual men and Black queers—specifically male-bodied femmes—is real. Dickerson says that while they understand how homophobia and transphobia became so prevalent in the Black community, it’s also time for it to stop. Luckily, in Portland, it’s in the process of being dismantled: On Thursday, June 6, Maarquii will headline The Thesis, the monthly hip-hop showcase at Kelly’s Olympian, supported by a lineup of other LGBTQ+ artists and allies. The importance of headlining on a stage usually wielded by those slinging machismo is not lost on Maarquii.

These conditions could actually work in their favor, since there’s virtually no one else creating content—both musical and visual—quite like theirs. It also helps that the rapper/singer is a trained dancer, aspiring actor, and creative director for all their visual content.

“My mom was constantly in my ear, telling me, ‘You’re so talented in all these different areas,’” Dickerson says. “‘You need to pick something and find a way to include everything else.’ After hearing her say that, what made the most sense for me was music because from there, I can do so much.”

Their Thesis set, while unprecedented, will be a sweet-and-spicy affair (and, full disclosure, one that I helped will into existence). “I really want to turn the fuck up. I’m probably going to have dancers,” Maarquii tells me. “It’s a big deal and the girls are going to come out and come through. I’m really excited there’s this bridge that’s starting to be built in the city between the different avenues of hip-hop.”

Dickerson says that while they’re definitely working on new music, right now they aren’t necessarily focused on making another full-length. “My next project is going to be funded. So, until I’m on my way to making that part a reality, I don’t want to put too much pressure on ‘I’m writing an album.’ I just want to write some good slappers... and then, when that coin comes in, I will.”

“Working with Black producers, women, and femmes is my priority. I love my guys [from Jvnitor]... but it’s very important that I also branch out and work with other producers and artists. When I work with people who look like me and walk through the world like me, the artistry is gonna hit differently.”

In terms of local artists they’d like to collaborate with, Dickerson says, “I literally just hit up Amenta [Abioto] today ’cause I’ve been wanting her to produce a track for me. And I really want to get on a track with Raquel [Divar]. I think she’s so fire.” Dickerson says they’d also like to make a short-film music video in the near future and have several ideas in the cannon. (The artist has already made one truly excellent short-film for “Ded Slapt.”)

“Working with Black producers, women, and femmes is my priority. I love my guys [from Jvnitor]... but it’s very important that I also branch out and work with other producers and artists. When I work with people who look like me and walk through the world like me, the artistry is gonna hit differently.”

Taking those crucial next steps shouldn’t be difficult for Maarquii. Their live shows are legendary affairs, helping them develop a faithful following of fans in the Portland scene.

“I stripped at this trans-femme-centered night and a bunch of girls came through for me—which is like classic-classic from the people who listen to my music,” they remember. “I’m bent over the stage, and these two queer babes with some stacks walk up, and they’re like, ‘Um, is it okay if we make it rain on you?’ Like asking for permission. And I’m like ‘Yesss!’”

It’s easy to see that Maarquii could be on the brink of becoming Portland’s next big break-out star.

“Now I’m in a place where I’m trying to polish everything: Polish my brand, my pen, and constantly elevate. It’s been a blessing to get to this point, but it’s also been very hard to get here, and I’m still at the beginning.”

Before our convo ends, we nerd-out about such validating media as queer-led, pro-Black podcast The Read, and our shared dream of Maarquii voicing a Crystal Gem on Rebecca Sugar’s animated series Steven Universe.

Jenni Moore is music editor and hip-hop columnist at the Portland Mercury. She also writes about comedy, cannabis, movies, TV, and her hatred of taxidermy.

Jenni Moore is music editor and hip-hop columnist at the Portland Mercury. She also writes about comedy, cannabis, movies, TV, and her hatred of taxidermy.

Album Review: Portland Band No One of Consequence's Believable Dream Awakens to a Promising Future