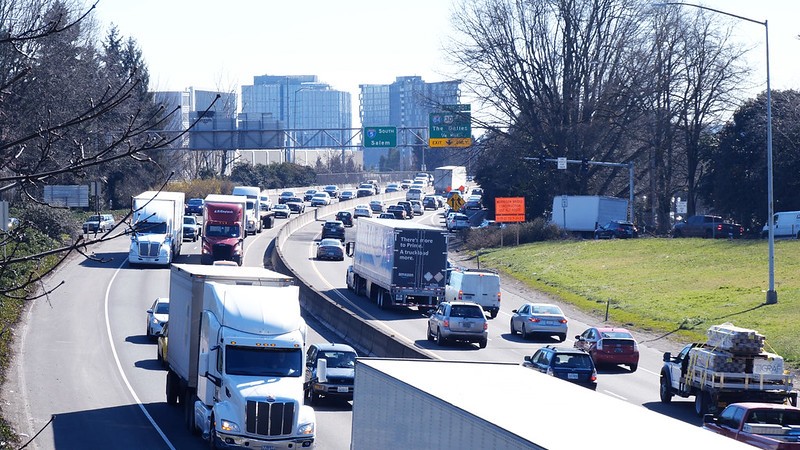 Interstate 5 in the Rose Quarter. Oregon Department of Transportation

Adding additional lanes to Interstate 5 in the Rose Quarter will have no significant impact on the environment, according to a new environmental assessment from the federal and state transportation departments. Critics of the project believe that the agencies’ calculation fails to account for an increase in vehicle demand that will accompany lane expansion and are urging the state to use tolling to address congestion in the corridor before spending over $1 billion to widen the freeway.

“They are putting their thumbs on the scale to make these absurd claims that a billion dollar freeway expansion is somehow good for traffic, the planet, and the community’s lungs,” said Aaron Brown, a member of environmental group No More Freeways, during a press conference.

The Oregon Department of Transportation (ODOT) was directed by the state legislature in 2017 to address congestion in the Rose Quarter section of I-5. The area is considered the worst bottleneck in the state, creating hours of congestion along a major freight route. ODOT’s solution was a proposal to add two “auxiliary lanes”—lanes added for onramp-to-offramp connections—and to study traffic tolling possibilities as a solution.

An environmental assessment of the project conducted by ODOT and the Federal Highway Administration in 2019 found that the proposed lane changes to the corridor would have no significant impact on the environment.

However, ODOT changed the design of the project following that determination, after hearing opposition from city leaders and community groups. The updated design proposed constructing a cover to dome over the freeway and act like a city block, connecting the historic Albina neighborhood that was splintered by I-5’s creation in the 1950s. In January, the Federal Highway Administration determined that the project’s design had changed enough since the original assessment that it rescinded its initial findings and required ODOT to perform an updated environmental assessment.

Advocates with No More Freeways believe that ODOT is not adequately accounting for induced demand—an observed phenomenon that when more space for cars is created, more cars will come to fill that space.

ODOT’s assessment does not attribute any changes in traffic along the corridor to induced demand. In its traffic projections, ODOT uses regional travel demand models from Metro, paired with highway capacity software to calculate projected freeway usage in 2045. According to ODOT’s calculations, trips would increase by 5 to 14 percent by 2045 along the corridor if the project is built, which the agency attributes to improved traffic flow, not additional demand.

No More Freeways believes that the agency should use modeling tools that place more emphasis on induced demand, like the calculator developed by nonpartisan energy research group Rocky Mountain Institute, to more accurately predict the impacts of adding additional lanes.

Joe Cortright, an economist and member of No More Freeways, said that because ODOT didn’t put more emphasis on the impact of induced demand in its modeling, the agency has “grossly underestimated the negative environmental effects on the region in the community.”

“The [I-5 expansion plan] is a safety improvement project that does not substantially improve highway capacity and is not expected to induce growth or create other effects that would cause indirect impacts,” the assessment states.

ODOT is using traffic projections from 2015 to inform its analysis, which critics say skews the findings due to both regional growth since 2015 and pandemic-related impacts on travel. ODOT’s own findings also indicate that adding tolling to the corridor during peak commute times would resolve congestion issues regardless of whether additional lanes are added, as first reported by the Oregonian. The state is planning on introducing tolling along parts of I-5 in 2026 and is expected to use tolling revenue to help pay for the $1.25 billion construction project.

Advocates with No More Freeways believe that ODOT could decrease the cost of the project, address congestion, and restore land to the Albina neighborhood by building the freeway cover, tolling the corridor as planned to reduce congestion, and not adding auxiliary lanes.

“We think capping the freeway is an excellent idea,” said Chris Smith, member of No More Freeways. “We simply don't believe that you need to widen it in order to cap it. Capping the existing freeway would go a long way toward restoring some of the restorative justice aspects that the neighborhood deserves.”