Up in NW Portland is a factory that bike nerds internationally revere and basically no one else knows anything about. It's the Chris King Precision Components factory, where 92 people work creating top-of-the-line bike headsets, hubs, tools, and full bikes from parts that are all made in America.

No where is Portland's bike economy on classier display than during Oregon Manifest, a big deal national bike building competition that culminates this weekend in a series of parties and events downtown you should definitely check out if you're interested in bikes, design, beer, friendship, or a combination of these things.

During the last Oregon Manifest, I profiled three of Portland's over 30 custom bike builders, artisans who painstakingly hand build bikes for individuals, and this time around I wanted to learn about the other end of Portland's bike economy spectrum. I wanted to talk about the big bike business, versus the little guys in Portland who are scraping out a living one frame at a time. Chris King the largest bike business in Portland and its products are sold in 27 countries. Altogether, Portland does about $63 million in bike business every year and, hey, North Williams' bike businesses even made the NYTimes today.

Chris King spokesman Chris Distefano was happy to oblige. "I've grown tired of talking about bikes as an environmental issue, bikes as anti-car, but never bikes as business," he said, introducing me to the factory's soccer-ball-shaped cat, Pele, before pushing open the door to the manufacturing floor.

Founder Chris King moved the company to Portland back in 2003, lured here by the cheaper cost of living than their previous California location and a tax break from the Portland Development Commission. While they're a big presence in the city, Distefano says he'd like Portland to step up its investment in bikes—especially mountain biking. It's ridiculous that Forest Park, just a few blocks away, has only .2 miles of singletrack mountain biking trails in its entirety, says Distefano.

"The city is working hard to bring bike business here and the mythology is that Portland has a perfect bike system. It's not. You know what a Portland high-five is?" he asks.

Forty percent of Chris King's products are now exported and sold overseas—the "Made in America" stamp is a strong selling point in Europe and Asia, says Distefano.

"It's not a nationalism thing, it's not a flag-waving thing. Made in America doesn't always mean better," says Distefano. "But we know we have good labor laws here, good environmental laws, and it's a quality control issue. We can't really control what a vendor is doing on another continent."

And, since it's Portland, they've gotten into the coffee business. Their headset-inspired espresso tampers run $110, but they're golden and have such a nice heft. I even got to touch one: 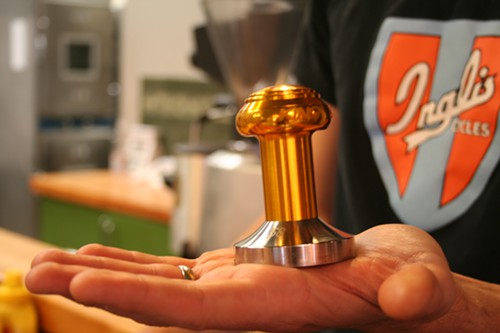 They've found some cool ways to save money thanks to their large scale. At the north end of the factory is a room full of metal scraps, giant machines, and these boring-looking objects. The aluminum puck below is actually a money and environment-saving object: the company squishes down all its oil-coated old metal scraps, squeezes 95 percent of the oil from them (soy oil, of course) for reuse, and then sells the remaining little pucks to metal recycling companies. It saves the company about $10,000 a year from not having to buy new oil.

In two corners of the factory are little bike building shops not so different from the artisan builders around Portland. Two lines of bikes, Cielo and Beloved are built within the factory walls. Chris King previously sponsored Oregon Manifest, but this year they're one of the 28 professional and six student teams entering the bike building competition. I wasn't allowed to take pictures of the bike they're entering (it's secret till Friday) but rest assured that it's beautiful.

Comments 1
Tags: Bikes Blogs
If you enjoy articles like this, please help the Mercury continue our mission of providing up-to-the-minute information, progressive journalism, and fun things to do in Portland by making a small recurring monthly contribution. Never forget: Your help is essential and very much appreciated!
CONTRIBUTE NOW