Last week, the city of Boise played host to over 400 bands spread across 25 stages for the fourth annual Treefort Music Fest (March 25-29). Despite still being March, the City of Trees felt like summertime. Walking around town from venue to venue in a T-shirt and jeans brought back some of my fondest memories from Portland’s Bridgetown Comedy Festival and the old MusicfestNW format. Treefort’s organizers managed to completely one-up the multi-venue festival presentation, specifically with the festival's mobile app, which included a handy line-tracker that provided updates on the lines at each venue, and would let you know when a show had reached capacity. It should become a staple at festivals like this moving forward.

The reality was, there were very few times when venue capacity or long lines hampered the enjoyment of the festival. It was easy to stroll up and watch Built to Spill perform at the main stage under the clear Friday-night sky. Boise's hometown heroes performed a career-spanning set, with plenty of old favorites, and a handful of new material off the soon-to-be-released Untethered Moon. A cover of Michael Hurley’s “Slurf Song” felt particularly inspired, given the wide range of delicious food cart options located just around the corner from the stage. 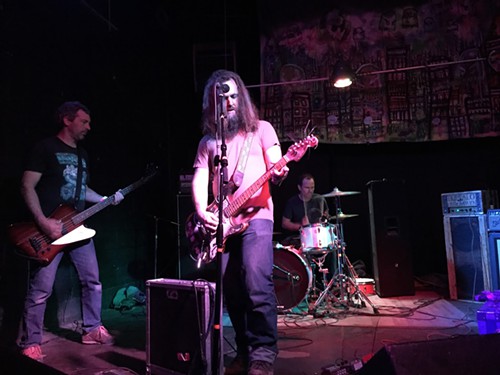 Thursday night saw Built to Spill’s guitarist Brett Netson take center stage at the Shredder in his psychedelic punk outfit, Brett Netson & Snakes. The venue, an homage to the Teenage Mutant Ninja Turtles’ villain of the same name, was modeled after the Foot Clan hideout from the TMNT universe. And while the Shredders’ skate ramp had been removed prior to the festival, the bands performing in the space made sure to live up to its name on a nightly basis.

Built to Spill weren’t the only local act to generously greet us out-of-towners. Clarke Howell of the one-man-band Clark and the Himselfs performed on Saturday night to a packed-out crowd at the Crazy Horse Bar. I didn't think it was possible for Clarke’s fuzzed-out rocker “Asteroid” to get drilled any further into my head, but rounding out his one-man operation with three additional percussionists and vocalists did exactly that.

The Crazy Horse hosted some of the rowdiest shows of the week, and a few of Portland’s finest bands were right at the center of the action. Punk-rock quartet Divers set the bar high on Wednesday night, with frontman Harrison Rapp utilizing all of the real estate provided to him by the extremely large stage. Rapp paused for a moment between his thrashing to acknowledge the history of the Crazy Horse. Initially closed down in the mid-'90s after hosting dozens of legendary acts, the venue went through multiple name changes before being being converted back to the Crazy Horse in 2014. The ensuing days of the festival saw the bar house mind-melting sets from the likes of Summer Cannibals, Wooden Indian Burial Ground, and Helvetia, and the stories that will be spread about the beer-soaked frenzy that went down during Saturday night’s Wooden Indian Burial Ground set should be strong enough to rival even the tallest tales from the venue’s glorious heyday.

The presence of Portland’s own music scene was palpable throughout the weekend. On Friday, PDX podcast crew Party Boyz hosted a daytime showcase at the Neurolux bar where I was able to catch memorable sets from Yeah Great Fine, Genders, and Sama Dams, all while sipping on one of the best Bloody Marys in town. Later that evening, slow-fi trio Bed played to a nicely sized crowd at the massive El Korah Shrine. The band easily won over the hearts of many of those in attendance, especially after frontwoman Sierra Frost raised her bass guitar to reveal a “Fear of a Female Planet” T-shirt, much to the delight of the audience.

One of the best aspects of a huge music festival comes from the the numerous opportunities for collaboration over the course of the weekend, and Treefort had this element in spades. For many, the highlight of the festival came on Saturday afternoon at Band Dialogue III, where Seth Olinsky of Akron/Family, who was performing at Treefort under the moniker of his side-project Cy Dune, took on the role of conductor in leading a dozen full bands in a massive orchestra that lined both sides of a closed off city block. Olinsky used cue cards to give the bands chord progressions, and his back and forth commands triggered bands, instruments, and alternating sides of the street, creating a sweeping whirlwind of sound that washed over everything in the surrounding area.

Olinsky’s Band Dialogue made for a seemingly impossible performance to follow up, and yet somehow the showcase at the intimate Water Cooler venue on the final day of the festival pulled it off. Luke Wyland of AU gave a stunning set of his new material, backed by dueling saxophones. Then, Wyland joined his Au bandmate, Dana Valatka, along with a huge circle of about a dozen drummers who were performing as U*. Much like Olinsky had done a day earlier, Valatka took command of his band, steadily building a cacophony of percussion into a rhythmic avalanche alongside vocals from Like a Villain’s Holland Andrews. By the end of the set, the entire room was overcome by the emotion of the performance, and the crowd was erupting along with the band with some heartfelt howls and yelps of their own.

Later that night, a mesmerizing set of psychedelic noise from Boise's own Sun Blood Stories brought the Water Cooler close to capacity, with a slew of guest musicians joining in for the band’s finale. Holland Andrews lent her voice again, this time combining with Sun Blood Stories’ slide guitarist Amber Pollard. Both singers knelt down at the edge of the stage, as they layered their splintering and soulful voices over the spaced-out barrage of noise coming from the band. The result was extraordinary to witness up close, and it’s impossible to imagine anyone in attendance leaving the venue unmoved by the staggering passion that poured off of that cramped stage.

Really, it’s tough to imagine anyone leaving Treefort unmoved. No matter what one ended up seeing over the course of the week, the good spirits that prevailed day-in and day-out from the bands, volunteers, and the attendees felt overwhelmingly positive. The festival had an nice and relaxing flow to balance out to the crazier side of things, making it possible to recover from any fatigue leftover from the night before. The summer festival circuit is alive and well in Portland, with plenty of good times to look forward to in the coming months at Bridgetown, Pickathon, Project Pabst, and MFNW, but I’m already counting the days before I get to return to the land of foothills and finger steaks and for next year’s iteration of Treefort.